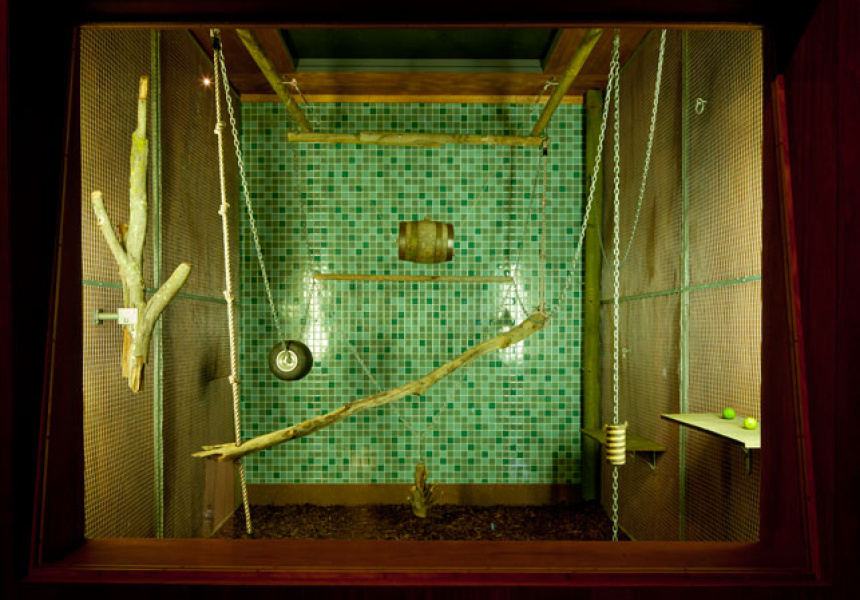 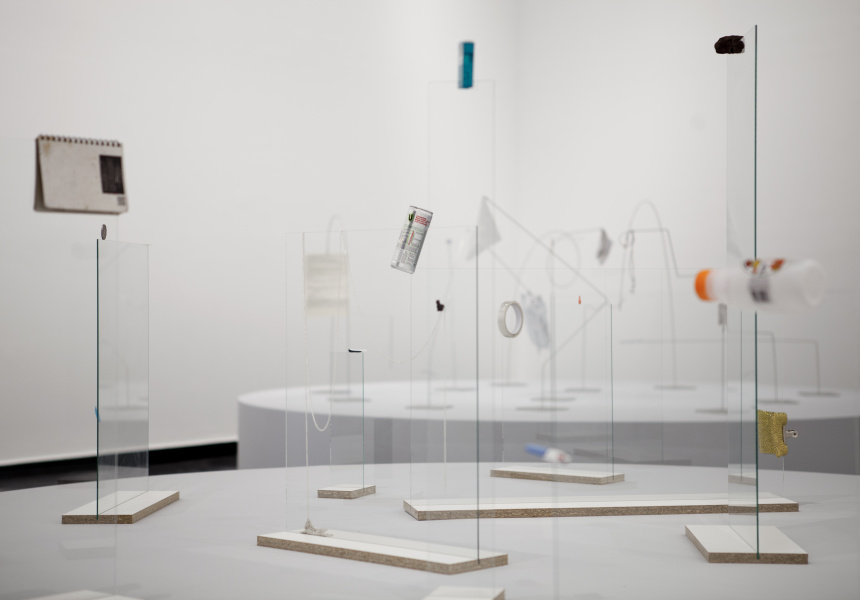 Wandering amid the streams of coloured light, loaded sculptural incursions and immersive musical and filmic gestures that scatter the Australian Centre for Contemporary Art’s vast spaces, NEW12 doesn’t give itself away too easily at first. Featuring six artists, curated by former Next Wave artistic director and current co-director of Sydney’s Performance Space, Jeff Khan, NEW’s latest instalment may work to absorb and envelop, but it doesn’t do so for its own sake.

Last year’s exhibition saw the likes of Brendan Van Hek, Rebecca Beaumann and Shane Haseman transform seemingly inert objects, arrangements and mechanisms into powerful aesthetic and philosophical motifs. This year’s collection of works – including Melbourne artist Charlie Sofo’s fragmentary sculptural and video works of daily detritus and friendships, and Kate Mitchell’s video installation tracing morse-code communiqués via venetian blinds – works on something of an opposite axis. Indeed, while vast and in some cases spectacular forms dominate ACCA’s spaces, they tie us back to the human experience, in all its complexity and normalcy.

If there’s one work that speaks louder than any, it’s that of Angelica Mesiti’s stunning four-channel video work Citizens Band. Comprising four screens arranged in a perfect, inward-facing square and unfolding in four distinct chapters, the work simply and poetically captures the unlikely musical performances of a quartet of migrant protagonists. Cameroon percussionist Geraldine Zongo drums the water of a Parisian indoor swimming pool, creating echoing rhythms with only the dunk and splash of her hands; Algerian Mohammad Lamourie sings a haunting lament to the plink and plonk of his decrepit Casio keyboard on the Paris metro; Mongolian throat-singer Bukhchuluun Ganburged plays a traditional fiddle and flaunts his incredible vocal craft on Sydney street corner; and Sudanese taxi driver Asim Goreshi whistles angelically in the front seat of his Brisbane cab.

Though its cinematic mechanisms are striking in the clarity and scale, Citizens Band’s effects are profoundly intimate and complex. We can’t help but become transfixed by the personal intensity and their performances and the cultural singularity of their cadences. But as the music dissipates, they and we are deposited back to reality of their context and surrounds in the urban West. It is a meld of identities, new and old – a mergence of tradition, history and upheaval. While neither the performers’ actions nor their contexts are odd in isolation, together they tell a different story. Mesiti’s protagonists are forever between cultures and worlds. Their songs resonate with the joy and tragedy of migrant experience.

Likewise, Ross Manning’s kinetic light sculptures or mobiles seem adrift between two disparate bearings. Each consists of variously coloured fluorescent tubes, which rotate and oscillate around a central chain, throwing phasing streams of coloured light about the space. At a glance, these mobiles assume the industrial perfection of modernism, but the devil is in the detail. The fact that they are strung together with extension cords, connected via power boards and driven by cheap, domestic, rotary fans deposits these works in the wonderfully dinky, humanist realms of DIY.

Bennett Miller’s sculptural replicas of primate enclosures from the Berlin Zoo also turn the focus back on us. While the enclosures – bordered by tiles, riddled with chains and steel and fragments of disembodied natural materials like branches and tree stumps – form a stark visage sans animals, these works seem to have a wider allegorical function. The zoological garden is an agent of our own invention – for our own entertainment – and hence is a direct reflection on us. Our need to entrap, limit and control applies not just to animals, but to each other.

Katie Lee’s sculptural practice has long invoked notions of physical control and manipulation. Her striking timber, rubber and metallic constructions evoke, activate, defuse and cordon elements of the space and just where bodies can tread within. But her work extends beyond the sculptural here. Small video screens pepper odd, seemingly random positions throughout the gallery, each picturing a dancer ‘responding’ to an empty segment or crook of the ACCA space. Lee’s sculptures and her collaborator’s movements each seem to articulate our constant, unconscious negotiation of physical and psychological obstructions.

It says a great deal about NEW12. Khan has managed to wrangle a group of artists who, quite simply, implore us to feel what it is to be human. Among the torrent of forces, structures, sensations and light, we are led to consider both ourselves and others, and we are all the richer for it.