Haring was the first artist ever to create a work on the wall, and in the lead up to the gallery’s summer blockbuster his signature ecstatic dancing figures are returning to the same space. 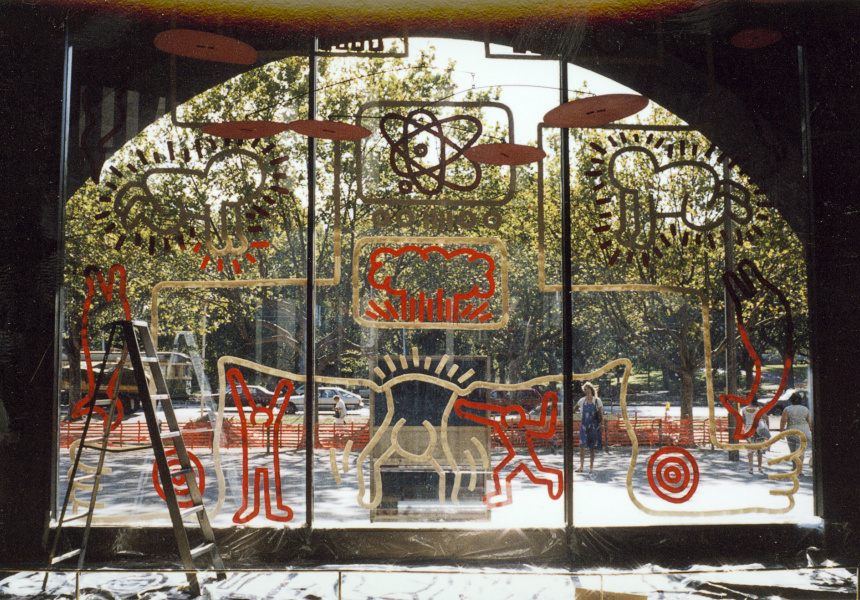 No matter which side you’re standing on, the National Gallery of Victoria’s Waterwall is a continual site of fascination for visitors, a transformative lens that makes rippling, indeterminate shapes out of whatever enters your sights, whether it’s within the gallery or on the other side.

In 1984, American icon Keith Haring became the first artist to create a work on the Waterwall. Working from a cherry picker over two days, Haring turned his brush to the glass panels, painting his signature ecstatic dancers alongside upward-swimming dolphins, crawling babies and a nuclear explosion in red, black and white.

“It’s a series of images about life and things which threaten life,” Haring told local media at the time. “Maybe it’s a kind of play on good and evil, but I prefer people to read it however they want to.”

Thirty-five years later, the untitled mural will be resurrected by the NGV in the lead up to its summer blockbuster, Keith Haring | Jean-Michel Basquiat: Crossing Lines, a showcase of more than 300 works by Haring and Jean-Michel Basquiat. Both got their start in the street-art world and went on to make some of the most significant and influential works of their generation. This new show explores their prolific careers as well as the crossover between their practices.

The new mural will be based on Haring’s original but takes the form of a vinyl graphic. It’ll be on display from November 22.