The Anangu artist talks to Broadsheet about the story behind TOGETHER, the spectacular mural she created in collaboration with Wurundjeri artist Samantha Roberts for The RCH150 Aboriginal Art Project. 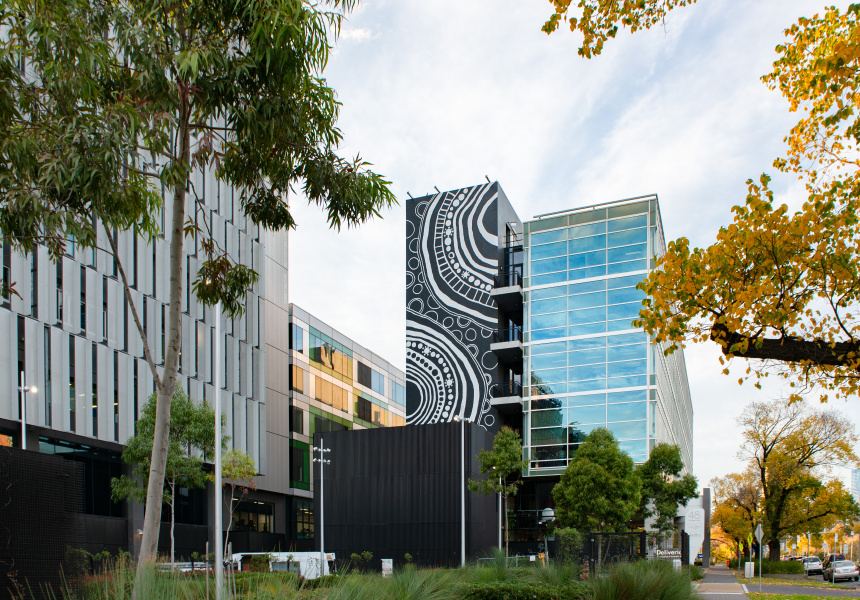 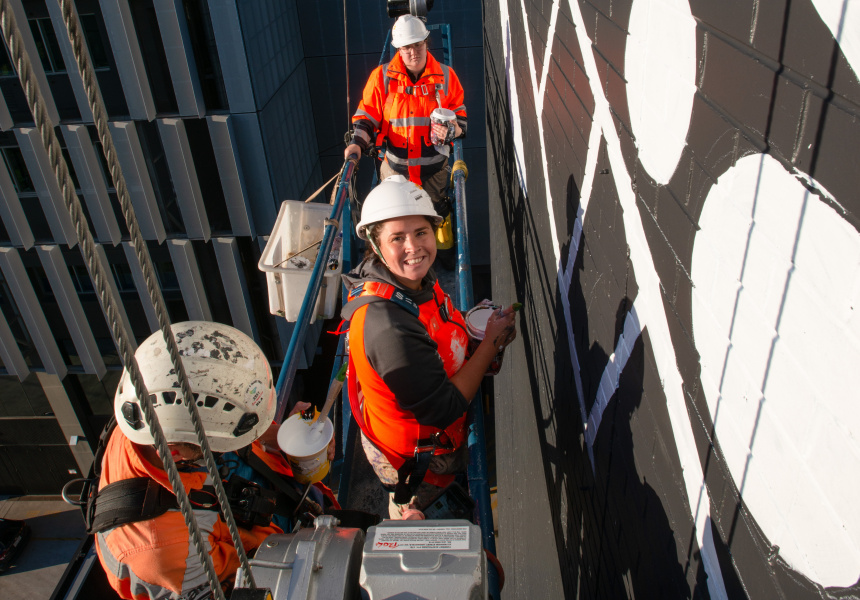 The next time you drive into the city from Melbourne’s northwest you’ll notice something striking at the Royal Children’s Hospital – a spectacular four-storey Indigenous artwork rendered in startling black and white on the façade of the 48 Flemington Road building. Titled TOGETHER, it’s the work of Anangu woman Elizabeth Close and Wurundjeri woman Samantha Roberts.

TOGETHER is one of two artworks by First Nations artists commissioned by the RCH Foundation for Celebrate. Create. Connect. The RCH150 Aboriginal Art Project, which marks the hospital’s 150th anniversary (the other is LEAF, a burnished bronze sculpture by Yamatji artist Robyne Latham that occupies the hospital’s Northern Court).

Roberts says the impetus behind the artwork is one of welcoming.

“Place-making in public art is important to me as a First Nations artist,” she says, “because it tells community that this is a welcoming space and this where you're acknowledged. We can see you, and we respect you, and we want you to be involved and to know that we're there for you.”

Close concurs, saying TOGETHER’s bold black-and-white design represents “the strength and importance of connection to country, to place, to space, to culture and community that we as Aboriginal and Torres Strait Islander people have, and how this underpins all aspects of our lives.”

The pair also sought to highlight the connection between culture and wellness for Aboriginal and Torres Strait Islander people and the vital role bush medicine plays in their overall health.

“We want our artwork to symbolise a bridge, connecting the communities to The Royal Children’s Hospital and know it is a safe and supportive environment for them,” says Roberts. “There are many tribes across Australia and we want them to know that The Royal Children’s Hospital is there to support them, to walk together with them on their journey.”

“I introduced some of the iconography from Sam’s practice that’s very Wurundjeri-specific into mine, and we blended it together,” says Close, who’s use of circles and dots in her own art “speaks to the importance of maintaining links to family and skin groups and language groups and the wider Aboriginal and Torres Strait Islander community.” In TOGETHER, these motifs appear alongside Wurundjeri iconography that addresses concepts of strength, resilience, journey and knowledge.

Underpinning Close’s artistic practice is a concept known in Pitjantjatjara and Yankunytjatjara culture as Tjukurpa. “It’s our Dreaming, it’s our law, it’s our stories, it’s our way of being,” she says. “It’s one of those terms that isn’t easily translatable into English – it’s a big concept.”

Painting a four-storey mural posed an array of logistical challenges. The experience gave Close the chance to stretch herself as an artist.

“This is the first time I’ve been a lead artist on a project of this scale,” she says. “I really just had to back myself and say, ‘I know what I’m doing, this is the plan, this is what we’re going to do.’ And we did it, and it worked.”

Close usually works with boom and scissor lifts when painting murals. However, access issues at RCH meant the artists had to familiarise themselves with a swing stage, a piece of equipment usually reserved for skyscrapers. Two rope technicians were on-hand to share their expertise.

“The opportunity to … expand my professional development in terms of working at heights was fantastic,” she says.

For Roberts, the project presented an opportunity rarely offered to early-career artists to execute a public artwork on an epic scale.

“Generally speaking, your first mural isn’t a 40-metre gigantic thing that you do on a swing stage,” Close says. “For Sam, it was a baptism by fire. I was so incredibly proud of her because I’m not sure if I were at the same stage of my career that I would have the bravery to get out there and do that.”

Chief executive officer of the RCH Foundation Sue Hunt says TOGETHER and the entire RCH150 project is an important visual recognition that the RCH and the RCH Foundation are dedicated to making sure Aboriginal and Torres Strait Islander peoples feel welcome at the hospital.

“It’s important we acknowledge the integral roles Indigenous people have played in the history of our country and ensure that we maintain respect and inclusion across our services so that we can improve the health and wellbeing of our entire community,” Hunt says. “The RCH Foundation is excited and humbled to gift these artworks to the hospital.”

Close believes public artworks such as TOGETHER make an invaluable contribution to Australian culture.

“Public art transcends power and privilege,” she says. “It takes work out the gallery context, which sometimes can be limiting in terms of who can access it, and places it in a public space for everyone to enjoy. Art should be for everyone.”

Displaying the work of Indigenous artists is even more critical, she says: “It’s increasing the visibility of Aboriginal art and culture and placing it in the public space, so we’re forcing First Nations perspectives into the zeitgeist, into the discourse, at the public level where everyone can access it.”

This story was produced by Broadsheet in collaboration with the Royal Children’s Hospital Foundation Melbourne.