On the occasion of Heide’s 80th anniversary (and the beginning of a media partnership with Broadsheet), one of Melbourne’s most- loved museums revisits its enchanting history and maps out its future. 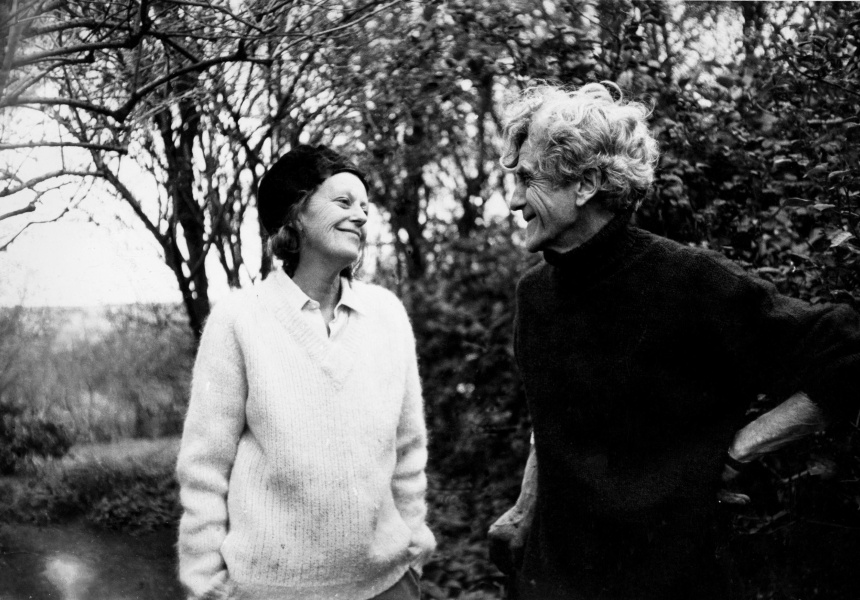 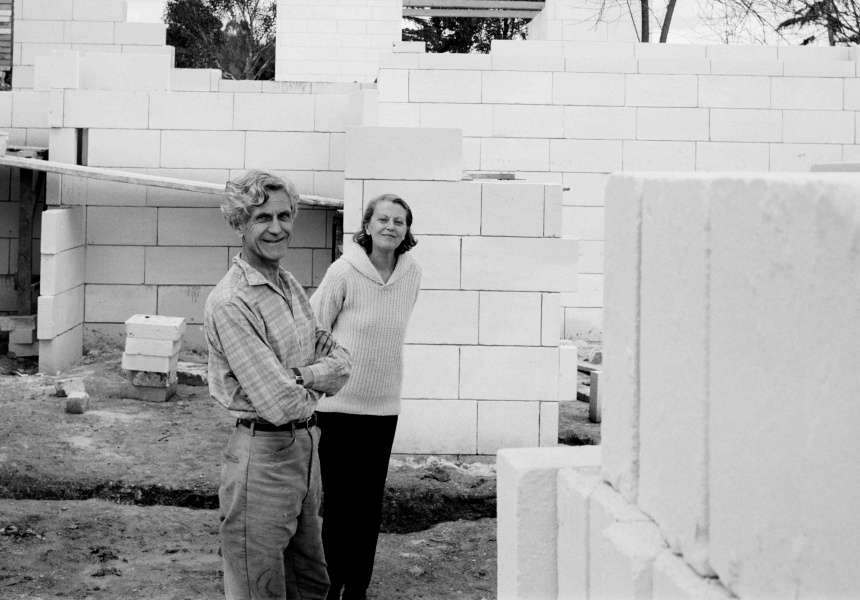 John and Sunday in the half-built Heide II 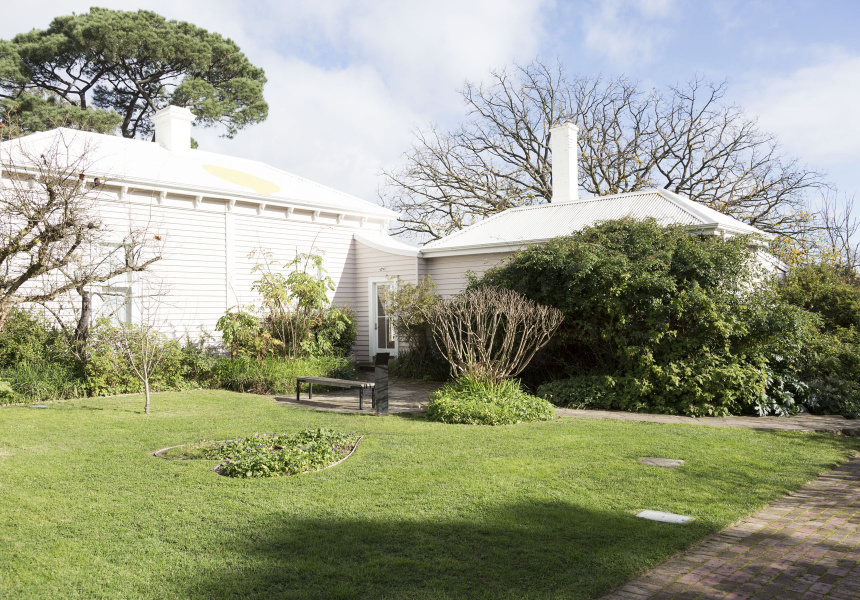 This article first appeared on Broadsheet in October, 2014.

“That first morning I walked in, the hall was full of paintings. The dining room was a studio with tins of Ripolin, bottles of oil, a scrubbed long table and on the walls many charcoal drawings of bearded heads. I saw real painting, free and authentic, for the first time.” Barrett Reid, 1967

In 1934, John and Sunday Reed bought six hectares of run-down farmland in what is now the suburb of Bulleen, about 15 kilometres from Melbourne’s city centre. It was barren, and due to its location on a Yarra River floodplain, the Reeds’ early horticultural efforts were obliterated. But their vision was long term; they always intended for the property to become a museum. By the time they passed away, 10 days apart in 1981, Heide was lush parkland, full of Sunday’s many beloved gardens.

It has been 80 years since the Reeds bought what is now the Heide Museum of Modern Art. To celebrate that milestone, the museum has spent the year putting on a series of exhibitions to showcase the work of artists who are tied to the Heide story.

Mirka Mora was a close friend of the Reeds for 30 years, and her private trove of whimsical paintings, soft-sculpture dolls, tapestries and sketchbooks is on show until November 9. An exhibition of graphic works by George Baldessin, who was a friend of John and Sunday’s adopted son Sweeney, and who was part of the second wave of Heide artists, will run until October 19. And over the coming summer, Heide will feature Arthur Boyd’s 1950s Brides series in homage to the relationship between the Reeds’ Heide circle and the Boyds’ Murrumbeena set.

“The other way in which we’ve focused on the legacy of John and Sunday and their acquisition of this property is to concentrate on updating the sculpture park,” says Jason Smith, the museum’s director since 2008. This year Heide added four works to its outdoor sculpture collection, a tribute to the Reeds’ early interest in the art form.

But for its current custodians, the 80th anniversary is not only an opportunity to reflect on the site’s intriguing and dramatic history, but to focus on its future. “Heide is not a mausoleum to modernism,” says Smith. “It’s an evolving entity. It’s got a life force. John and Sunday were about the contemporary art of their time. So are we.”

In this tradition, in March next year, Heide will put on an exhibition of artworks it has acquired since 2000. Smith estimates about 50 per cent of the works have not been on display before at Heide, including a major sculptural work by Rosslynd Piggott, called Tremor, and a large-scale installation by Rosalie Gascoigne called Takeover Bid. Smith and his colleagues are worried there won’t be enough space for all the art, which is another thing that’s been on his mind.

“In the long-term we want an extension to the newest building, Heide III, to provide us with more galleries for the permanent collection of contemporary art,” Smith says. “And more humane staff accommodations.” It might look impressive to visitors, but right now, the Heide workforce is crammed into a few small rooms at the edges of the Heide III galleries, which were built in 1993 and renovated in the mid 2000s.

Smith’s office is a smart but small rectangular room lodged between the newer gallery and the iconic modernist home the Reeds built in the mid 1960s.

By virtue of the era in which it evolved, Heide is a bastion not only of modernist architecture, but art, literature and social history. But the Reeds’ goal, first and foremost, was to seek out and promote art of the current day.

From the 1930s the Reeds provided moral and financial support to a group of fledgling artists that went on to disrupt and redefine the Australian art landscape, such as Sidney Nolan and Albert Tucker. Both artists lived for a time at Heide (Nolan and Sunday had a long and open affair) and the Reeds even adopted Tucker’s son with Joy Hester. Over the years the Reeds’ intellectual and social circles came to include other iconic Australian artists such as Arthur Boyd, John Perceval, John Olsen, Charles Blackman and Mora.

“During the years around World War Two, Heide was pivotal as a haven for artists such as Nolan, Tucker and Hester,” says Terrence Smith, an Australian professor of contemporary art history who teaches at the University of Pittsburgh. “These artists experimented with intense forms of figurative expressionism and surrealism that transformed all categories of Australian art.”

This haven had a physical location: the old farmhouse the Reeds moved into in 1934, known as Heide I. Today this building is used to display work from the permanent collection. It’s a weatherboard cottage built in 1870, which the Reeds renovated in a French provincial style – Sunday was a serious Francophile – and painted pink. A cattery, now overgrown with shrubs and trees, is a lasting testimony to Sunday’s cat obsession. She not only imported pedigree Siamese breeds, she collected strays and, according to curator Lesley Harding, for a long time had more than 20 cats at Heide.

“During the post-war years, when national insecurity created a leaden atmosphere of social conformism, Heide became a place of intellectual and sensual stimulus,” professor Smith says, adding that it was no fluke that Nolan’s “Kelly series” was painted there.

Smith is referring to Sidney Nolan’s iconic works depicting Australia’s most famous anti- hero, Ned Kelly, which Nolan painted on the dining table at Heide I. It was these canvases, stacked in the Reeds’ hallway and later in a shed outside Heide I called the “Doll’s House” (that’s still there, though now ramshackle and overgrown), that poet Barrett Reid recalled in 1967 when he talked about the first time he saw “real painting” two decades earlier.

Nolan’s pictures, which were donated by Sunday to the National Gallery of Australia, depict the legendary bushranger as a boxy abstract phantom, all flat, square shapes and usually coloured black. “While painting the Kelly series [Nolan] did on occasion paint with one arm round Sunday’s waist as she stood beside him,” John Reed wrote in a letter in 1979. When Sunday would not leave her husband for Nolan, Nolan eventually fled Heide and married John Reed’s sister, Cynthia.

“I’ve learned over the years here that the truth of Heide is stranger than any fiction you could write,” Jason Smith says. “We are still learning things.”

In fact, two of Heide’s curators, Harding and Kendrah Morgan, are right now deep in the museum archives, researching material for a double biography of John and Sunday Reed called Modern Love, to be published next year.

Lesley Harding recalls the story of a 1963 dinner party the Reeds put on for a visiting “art world dignitary from London.” While most of the artists in attendance got drunk and ignored the guest of honour, the vivacious Mirka Mora, “engaged the VIP in a long and intimate conversation about the merits of kissing.” At another party the Reeds hosted at their beach house in Aspendale, the Rolling Stones showed up. “John and Sunday had a very strong presence, Sunday especially,” says Mora, now in her eighties. “When they looked at you, you felt it. They could see right through you.”

Mora has a visceral reaction each time she returns to the property.

“Heide means art to me. It did then, and it does now,” she says. “It is very emotional for me every time I visit because I can feel the presence of John and Sunday. I can see them walking in the grounds.”

One of Jason Smith’s dreams for Heide is in fact directly inspired by the museum’s history. “One of our ambitions, to bring us full-circle, is to have an artist residency here, so we can have artists working on site again as they did in John and Sunday’s time,” he says.

“We’re going to continue to show major international exhibitions,” he adds, alluding to an exhibition scheduled to open in November 2016 that will bring the work of one of America’s most iconic modernist woman painters to Melbourne.

Another project slated for the summer of 2017–18 will, “promote an experience of Heide II, the modernist house, as architecture, not just as a display venue,” Smith says. With only some original furniture inside, Heide II will be presented as a work of design in itself, which it most definitely is.

Heide II, which the Reeds moved into in 1968, is an Australian architectural icon. In 1963 the Reeds commissioned Melbourne architect David McGlashan to build them “a gallery to be lived in.” The house is made from only four materials – Mount Gambier limestone, terrazzo, glass and pine – and as it has aged, it’s taken on a patina of grey concrete. “There are no internal doors, no woodwork except the ceilings and no paint anywhere,” John Reed wrote to a friend while it was being built.

This building is a favourite space at Heide for many visitors. Its rooms are elegant, and the vista of a rolling meadow interrupted by a sky-scraping eucalypt is spectacular. On my most recent visit to the museum I stumbled upon the Wild Garden, which is outside Heide I. In among unruly bushes and native shrubs, there’s a bench beneath a canopy where late in the afternoon, sunlight streams through the branches. It’s a charming spot.

I have been to Heide more times than I can count. I only just discovered the Wild Garden.