With help from a few Melbourne mates (including Cherry Bar’s James Young), Joey Kellock is not only spreading lasagne – but love – this lockdown. Particularly to those involved in Rising, which had to be cancelled just as it began. “We were about to be hit by a redefining, transformative event … People are really, really hurting right now.” After the perils of 2020, lockdown 4.0 is at best inconvenient – and at worst deeply damaging for events, businesses, livelihoods and the headspaces of many Melburnians.

Holing up at home – again – for at least two weeks, with very little contact with the outside world, it’s easy to forget just how much heart this city has.

But Joey Kellock, the man behind 1800 Lasagne, wants to remind you. So, he’s spreading love as well as lazza this lockdown.

It started out as a simple sentiment shared to Instagram at the start of lockdown. It became a sticker. Then a poster, thousands of which are being plastered around town from today. But the much-needed message – “Hang in There, Melbourne” – is also emblazoned on four gigantic digital billboards. There’s one in South Melbourne alongside the M1 and three throughout the CBD.

“Everybody needs a bit of love, especially in times like these,” Kellock tells Broadsheet. As we ride this thing out, it’s “a feel-good message to Melbourne, to Melburnians. Specifically directed at members of the hospitality, food, music [and] arts community.”

“I can’t overstate how much I’m feeling for the organisers and the people affected by the cancellation of Rising. We were about to be hit by a redefining, transformative event. It would’ve lifted the spirits of so many. People are really, really hurting right now.”

Kellock isn’t in this alone. He’s had help from Brian “BT” Taranto (of touring company Love Police), who donated the South Melbourne billboard; Weekdays Design Studio’s Todd Vanneste (also Frankie’s and Stan’s), who helped with the visuals; Cherry Bar’s James Young; and street-poster distributor Plakkit, which is putting them up for free. 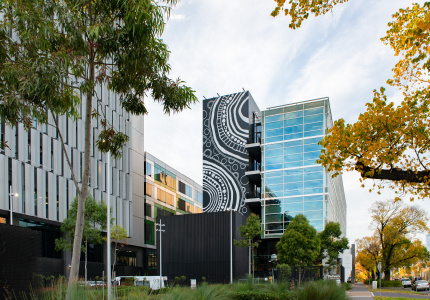