Group Work – Turning the Everyday into Something Beautiful

A group of local artists and makers get together to turn ordinary household objects into contemplative works. 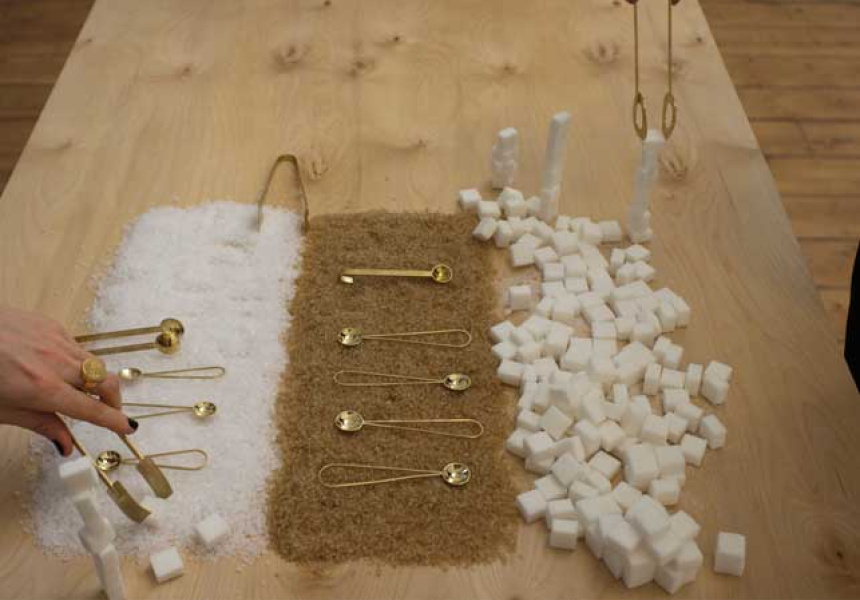 Behind every mundane object we encounter every day, someone somewhere has had a hand in designing it, in the hope that it would be pleasing to the eye as well as to the touch. And while most of us don’t take a second glance at the humble pot handle, tongs or trivet once we get out of the kitchen, the debut exhibition from Group Work – Something To Hold On To – contends that these second-class citizens of the household take top drawer.

Group Work is a collaborative project already a year in the making, with local artists and makers Antonia Sellbach, Dell Stewart, Esther Stewart, Sarah Trotter and Anna Varendorff taking the helm for the first exhibition. It all started when Sarah Trotter (food stylist, designer and Trotski of Trotski and Ash) landed a job that led her to trawling through eBay and “mysterious rooms full of things” in Melbourne’s suburbs. In her search to find the taps, handles and other fixtures and fittings that were “just right” for the house she was working on, she started seeing these everyday but necessary objects in a new light – possessing personality and a sensory element that extended beyond the touch.

“I think there has been a shift in the last few years where people are beginning to think about where things come from, what they are made of, whether they work in the best way possible and how – even down to the smallest detail in the house – things might contribute to their everyday experience,” she explains.

The diversely talented group of artists behind Something To Hold On To each took a component of the household and based their project around that one item, each applying a personal, creative touch.

“Everyone was really interested in stepping outside their practice,” Trotter urges. “Each artist worked with varying degrees of independence and experience, each project with differing levels of complexity. Knowing the artists and their work, I had many expectations and a vision for how things might turn out, and have consistently been surprised by the way the objects have shifted over the months, all from conversations and a rigorous testing of ideas.”

Varendorff, a jeweller who mainly deals with metals – and who made a collection of utilitarian yet dainty brass cutlery for the exhibition – used the opportunity to try her hand at porcelain to make cupboard or drawer handles. Meanwhile, fellow artists Dell Stewart, Esther Stewart and Sellbach applied personal signatures to their works. Sellbach’s wooden trivets (which could easily double as children’s puzzle blocks) echo her continuing work and exploration of the various forms and functions of geometric objects. Dell Stewart’s fascination with wooden textures comes through in her tree branch-like wall hooks, while Esther Stewart’s door push panels hark back to her previous work in residential spaces.

Despite the varying aesthetics, the objects share the same aim: to encourage people to become a little more touchy-feely with everyday objects. The knowledge that the artists have thought about how their work will be used in someone’s personal space, and that so much time and effort has been spent on items most of us simply stash away in the kitchen cupboard, amounts to a sense of intimacy and newfound appreciation for the everyday.

Trotter explains that some of the works in this show will keep evolving, with artists pushing the initial idea into further editions, new materials and new configurations. Group Work itself aims to be an ongoing project, rounding up more creatives over time and potentially exploring more concepts along the way.

“There is a list of exciting and very varied Group Work projects waiting in the wings,” says Trotter. “All of them have a similar approach to Something To Hold On To but with new scenarios – parts of the home or ordinary moments that I believe have the potential to be thought about in a different way.”

Something To Hold On To by Group Work shows at Mr Kitly until May 6. Items are for sale. An online shop will be available soon.