Greville Gets its Groove Back with Art at Ladro

Twenty years ago, Greville Street, Prahran was a creative, artistic hub. Now, a savvy group of business owners have collaborated with street artists to bring the street back to life. 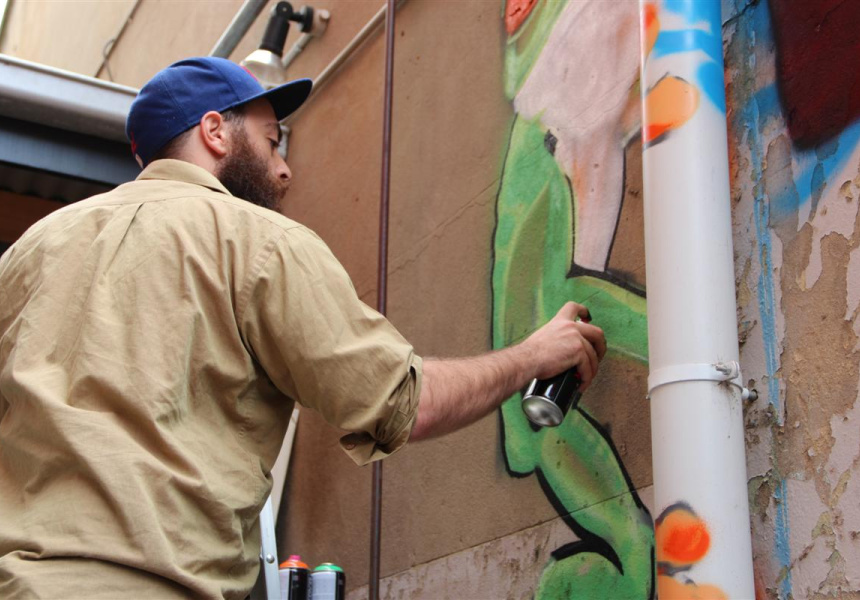 The speedy gratification of consumerism and the complacency it instils seems to have stunted the artistic growth of Greville Street over the last decade. Once a hub of creativity and cool, in recent years Greville Street has seen the markets, live music that used to create a buzz on the street move north of the river. In the process, the street has begun to face inward, focusing almost entirely on the world of retail.

All this is slowly starting to change, however. The Greville Street Common – a community group founded in April 2011 by Ladro co-owner Ingrid Langtry and owner of Metta Scents Kim Wood with a plan to inject new energy into the old street – has collaborated with a group called the Revurt Street Art Project and painting has just began.

Fletcher Andersen, street artist behind the successful blog invurt.com and business analyst Monday to Friday started the Revurt Project six months ago. “Revurt is an umbrella name for us going and painting stuff and a name we can put to the community artworks that we’re trying to do.”

The reasons behind the community artworks are simple. “The overriding plan is to revitalise public art in Stonnington. We’ve been doing this for around six months now, just quietly, talking to business owners, finding walls laying fallow and offering to paint them.”

Langtry and Wood heard about the project through a contact at the Art Series Hotels in the area. “We heard about what Fletch was doing and thought ‘we’ve got walls to offer’,” says Langtry, whose business is the first on Greville Street to have its wall painted. Langtry is exposed to a vibrant arts culture at her other restaurant, Ladro Gertrude in Fitzroy. “If I look at Fitzroy, there are so many amazing things happening on the streets – bands playing, street art, performances, there’s a thriving underground artistic community in Fitzroy.”

So last Sunday, two artists, Conrad Bizjak and Heesco, took to the side wall of Ladro with spray cans and ladders, the only brief they both mention is of creating work that is nature-friendly with images that support the sustainable ethos of Ladro with their bee hives on the roof and focus on local produce.

“I’m painting a Shaman,” says Heesco. “My background is Mongolian and I’ve been working with making paintings lately that depict Shamans. Traditional Mongolian Shamans have intricate clothes and are a lot of fun to paint. It’s the city and it’s a really busy area of the city – it’ll be good to have someone from a different time and place.”

Bizjak starts with a frog. “Frogs are fun, they make me happy. I always like to paint stuff that makes me happy, otherwise you try to paint stuff and you’re not into it and you end up cracking the shits with yourself. It’s terrible,” he says.

The colours move from bright greens to rich deep reds and blacks; characters, vines and leaves begin to watch over the laneway. They take over the wall and the calm free flow of the work is inspiring. “Most of the time it is free form,” says Andersen. “These are the kind of artists who work on their feet. A lot of the time the results they get from being spontaneous and creative are a hundred times better than if they had planned it.”

The response from the Greville Street Common and the wider community has been nothing but positive. “The response has been amazing and one of the landlords came to our meeting the other day and said, see that wall (pointing to a huge blank brick wall), he said it’s yours,” says Langtry. “We’re hoping to do 10 to 20 walls in Greville Street and get some of the offshoot streets.”

The essence and goal is of community and to bring locals back to the street, not just to shop but to be part of something. Kim Wood from Metta Scents says, “I loved Greville Street in the early 80s; it was creative, happening, alternative. Many of us are keen to see that again and make it a place for the people, not just a place to come and consume.”

Watch this Greville space and its walls. There are plans to bring bands and markets back and create a community hub again. The artwork alone is an inspiring shift.