Artist Ash Keating is stepping away from the large public paintings he is known for and returning to the gallery wall. 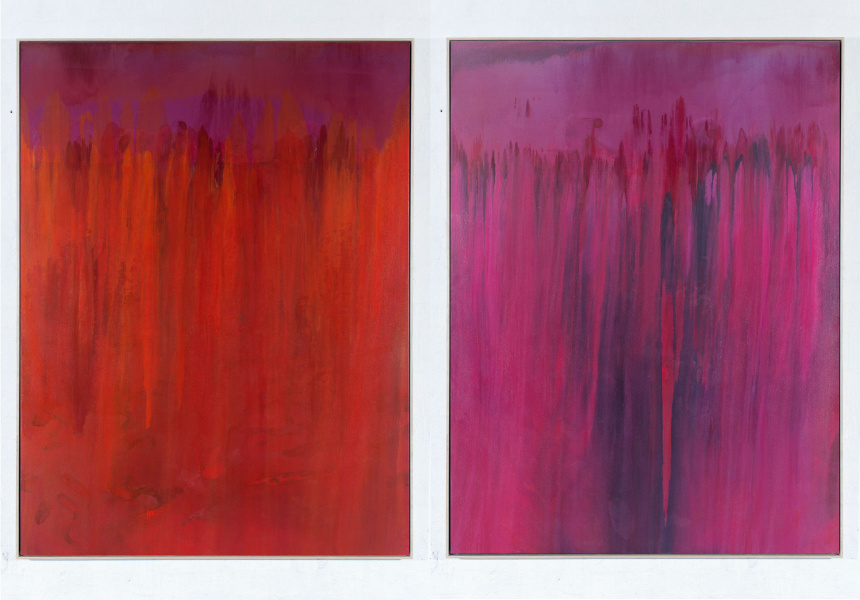 Melbourne has built up an impressive collection of Ash Keating’s large-scale public art works. For example, his work at Melbourne Now painted on the north wall of the NGV in front of an audience, and his commission for RMIT’s basketball courts. His latest, an exhibition called Gravity System Response, has moved away from the public sphere and into the traditional confines of a white-walled gallery.

In such a tame space, Keating’s work has an altogether different impact. It encourages the audience to look longer, to see perspective and depth in the canvas. But it’s no less attention grabbing.

“I’ve painted on canvas like this some time ago – back when I was at art school,” says Keating. “But then I quickly moved into lots of different projects. The new works in the studio are an extension of the recent large-scale works, but a much more refined and laboured version of that.”

There are technical differences that Keating is keen to point out. These new, Rothko-esque works take longer. The creation of each painting involves several stages, using an airless spray gun, paint and water. These painting are a response to the natural processes of erosion and Keating’s process reflects this.

The paintings develop the concept of the RMIT work, which was called Natural System Response. “That was also about marveling at natural processes. This is using those same systems that the environment goes through naturally – like a dirty window covered in dust, eroded by rainwater. It’s almost like what you’d see coming from erosion in the landscape.”

“This time it’s about controlling it and making gravity work for me, drawing the paint down to the earth. It’s partly controlled, but I'm also allowing it to take shape by itself.”

“It’s hard to really say I’m trying to create works that are immersive when they’re brought down to this scale, but I still am. I still want them to have the capacity to have people get lost in them.”

Ash Keating’s Gravity System Response is presented by Blackartprojects and can be seen at 524 Flinders Street until April 23.