The Government Inspector – The Play That Wasn’t Supposed to Happen

The unlikely events that led to Simon Stone’s upcoming adaptation of The Government Inspector, playing at the Malthouse Theatre, prove that sometimes truth is stranger than fiction. 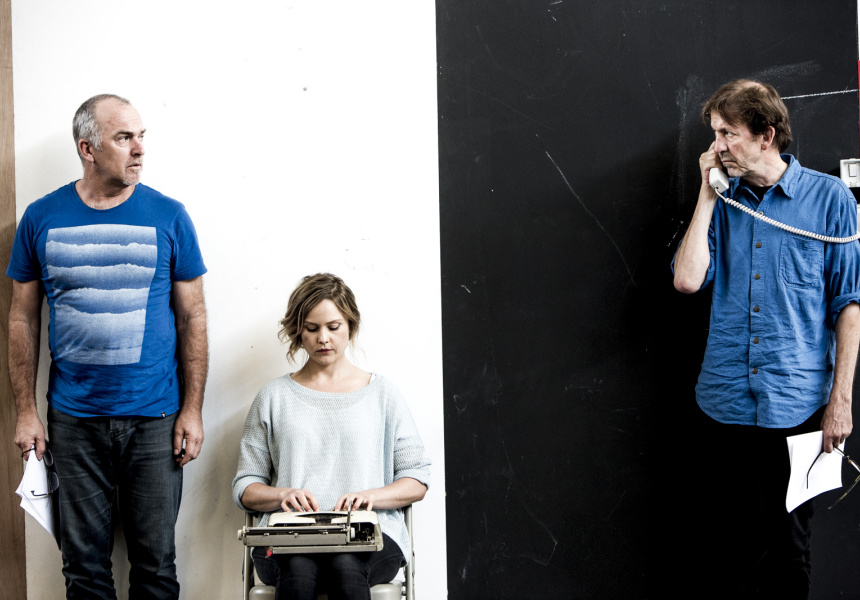 A classic monomyth, or hero’s journey, centres on a protagonist whose safe and predictable path is unexpectedly disrupted by an unforeseeable event or circumstance. Facing uncertainty, and with an imminent doomsday fast approaching, the protagonist must act quickly and decisively to save the day.

Late last year, while in rehearsals for the Malthouse and Belvoir St Theatre’s season-opening performance of The Philadelphia Story, director Simon Stone and his cast received an ominous letter from the estate of Ellen Semple, the late wife of the play’s widely cited author, Philip Barry. While Barry’s work has been out of copyright for well over a decade, it recently came to light that Semple co-authored the piece; meaning permission from her estate must be granted for adaptations of The Philadelphia Story. The letter denied the necessary consent – meaning sudden death for the production. Given just 24 hours to announce a replacement show, Stone did what any character deserving of the title of ‘hero’ would do and got on with the task at hand.

“I didn’t want to stick my head in the sand because our dream had been shattered. My allegiances were to the audience and the cast. I wanted the audience to see the best show possible – considering time constraints – and I needed to ensure that all the actors stayed employed. So I wasn’t just saving the company’s arse,” says Stone. “To be honest, The Government Inspector was the only thing I could think of.”

While a combination of desperation and necessity were the initial drivers for Stone’s decision to present an adaptation of Russian dramatist Nikolai Gogol’s 19th-century comedy of errors, as the cast unpacked the play, unlikely parallels emerged. In the play, the corrupt bureaucrats of a backwater town receive correspondence from St. Petersburg declaring that they are about to be audited – much like how the cast’s activities were disrupted by the delivery of a letter. Where the original plotline sees an aspirational public servant confused for an inspector, Stone applies the case of mistaken identity to a meta-narrative in which a fledgling actor turns up for an audition and finds himself charading as a famous international director.

The Government Inspector is about appearances and authenticity. What is the value of adaptations? Are they just an opportunity to pretend you have an idea when you’re in fact just being an artistic imposter? Who owns what ideas?

While a post-modern mashup of a Russian satire might sound like an ambitious choice considering the quick turn around required, considering Simon Stone’s trajectory up until this point, it was almost to be expected. Still under 30, Stone is responsible for establishing the independent theatre company The Hayloft Project, has held the position of Resident Director at Sydney’s Belvoir Theatre, has won Helpmann and Green Room Awards, toured shows throughout Europe and most recently, made his cinematic debut directing Cate Blanchett in the collaborative screen adaptation of Tim Winton’s The Turning, at the request of Blanchett herself. Where his critics have accused him of many things, complacency isn’t one of them.

Keeping in mind the sense of abandon and the drive that has made Stone so successful, his response to the question of whether he is nervous about pulling off what on paper sounds like a slapdash piece of theatre on the stages of two of Australia’s most prominent theatres is not surprising.

“While the Malthouse and Belvoir are both well-respected institutions, they have achieved this through being on the creative front lines,” says Stone. “In my experience, their audiences are exhilarated and engaged when they’re watching my shows. The only time people close their minds is when they are told to, which is the dangerous power of the critics – to lead a reactionary form of thought. Generally speaking, if people don’t like something it’s a matter of taste, not because it’s too shocking or wrong.”

Although The Government Inspector is concerned with imposters and fraudulence, it is clear that this invitation to the audience to engage with the piece on their own terms is genuine. While the basis of the show and the events that led to its very existence are baffling, Stone insists that one doesn’t need to have a background in theatre or any knowledge of Gogol’s work to enjoy it. “At the end of the day it’s about creating something people can have fun with.”

The Government Inspector runs from February 28 to March 23 at the Malthouse Theatre.

We are giving away five double passes to the performance of The Government Inspector on Friday March 7 at 7.30pm. To win, click here.