Georgia O’Keeffe and The Australian Modernists 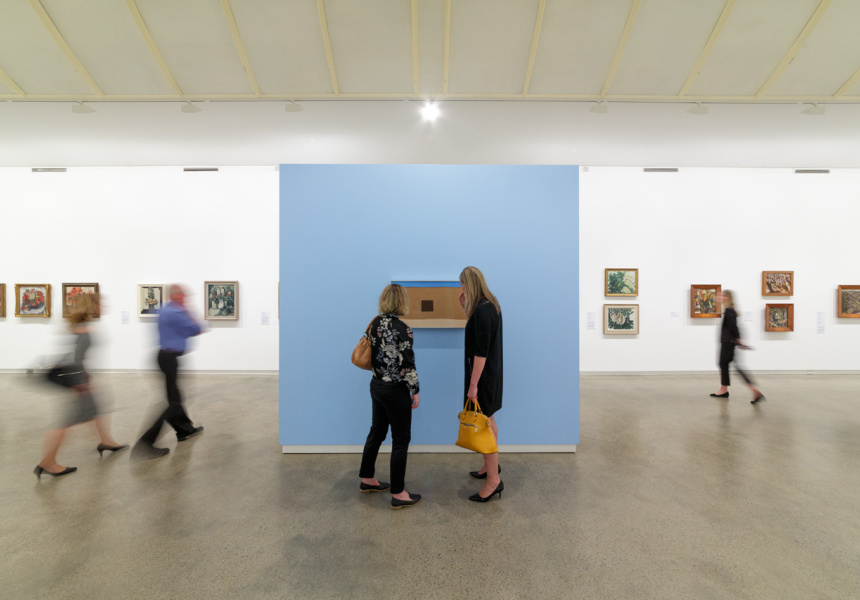 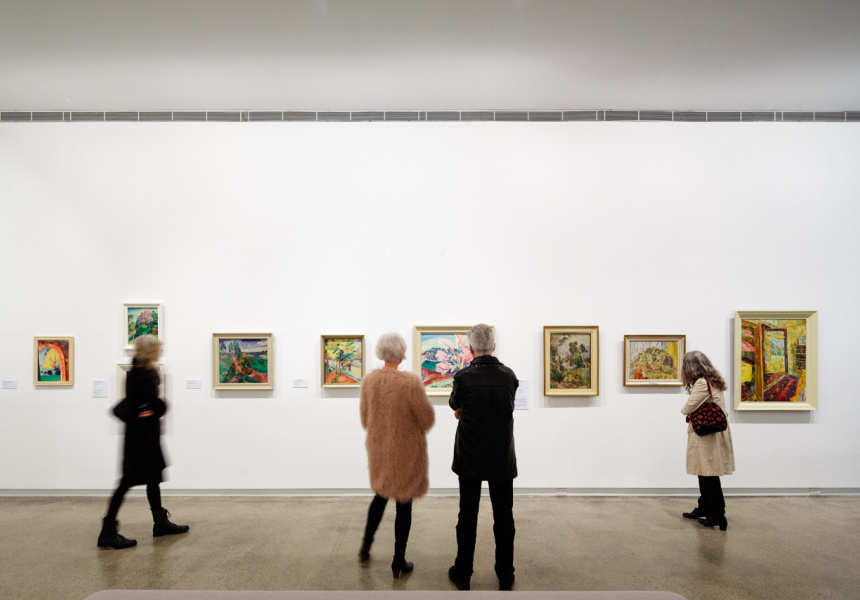 The first image in Heide’s new exhibition O’Keeffe, Preston, Cossington Smith: Making Modernism is a small, striking painting by Georgia O’Keeffe. It’s a context statement of sorts for the rest of the show. In the Patio III (1948) is a starkly minimal piece comprising three bands of New Mexican colours – sand, wall and sky – and a brown square in the middle. Modernism as a movement is about breaking free of the old European conventions and seeing things anew. O’Keeffe wanted to capture something of the New Mexican environment she loved, without resorting to traditional landscape painting.

The exhibition also charts the development of two Australian modernists.

Margaret Preston begins with still lifes: flowers and common domestic settings. As she develops across the years, her colour palettes mute as she grows more interested in Australian light and flora. By the 1940s she’s working with palettes usually seen in Indigenous painting, with deep black lines separating browns and ochres. Then, with Grace Cossington Smith, there’s an explosion of primary colours in her paintings of landscapes; the construction of Sydney Harbour Bridge; and the David Jones cafeteria. It’s kinetic. Colours overlap and fold into each other. The canvas is filled with hundreds of blunt blocks of bright colour, scattered light and coarse brush strokes.

And then we’re back to the light, open world of O’Keeffe’s New Mexico, where soft, curved deep blues and pastel pinks show nature in all its raw beauty. Her landscapes are weathered, bright and holy. Her sand is soft and her clouds look like grey silk.

Here’s the first question you might ask: why these three artists? They didn’t know each other. They never corresponded. Cossington Smith and Preston were probably aware of O’Keeffe, but she almost certainly wasn’t aware of them.

Curator Cody Hartley, from the Georgia O’Keeffe Museum in New Mexico, says it was an opportunity to show how three very independent artists interpreted the modernist approach.

“Heide’s initial idea was to bring O’Keeffe to Australia, but not just for the sake of it,” says Hartley. “What hooked me was that they wanted to use her work to make Australian audiences better appreciate Australian modernism.

“There were plenty who we could see complementing O’Keeffe, but these two had the most to say,” says Hartley. It was Cossington Smith and Preston who did the most for a distinctly Australian voice, he says, in the same way that O’Keeffe was working towards a uniquely American art.

“Look at Cossington Smith’s paintings of the Sydney Harbour Bridge, or the way Preston incorporates Aboriginal colour palettes into her landscapes,” says Hartley. “They’re trying to capture their experiences of Australia, trying to create something authentic, free from the European culture they’ve inherited.”

Hartley says it was never meant to be a statement to focus on three women. “When we came to these three names, there was this moment when we all looked at each other and said, ‘this is it: O’Keeffe, Preston, Cossington Smith’. That they were all women was a bonus,” he says. “It was an opportunity to talk about them as artists, not as women.”

But it would be disingenuous to say that their experiences as women didn’t have an impact on their careers as artists. O’Keeffe, for example, grew increasingly frustrated by critics’ reading of her work as inherently sexual.

“It’s fair to acknowledge that she was an unconventional person in her lifetime. She was comfortable with her body and her sexuality, and comfortable enough to allow her husband to photograph her nude, but she was frustrated when he showed those photos alongside her work.”

It’s the narrowness of this interpretation that bothered her. “The question itself, of whether these paintings are reflecting the human body in a sexual way, it’s a gendered question,” says Hartley. “Men would never have been asked that.”

“It tied her hands and made everyone look at her work in the same way,” Hartley explains. “She said to critics, ‘if you see that in my work, it says more about you than it does about me’.”

It is indeed limiting to see the work only along the lines of gender. But with controversy surrounding, for instance, the NGV’s focus on white European men, this is a reminder not only of the contribution of women, but of breaking free from the old Western perspectives of painting that still dominate how we look at art.