In the Galleries: Four Shows to See in October

Concrete blocks and “hazard architecture”, 29-metres of rare library books, and tapestries made by prison inmates. Here’s your month in the galleries. 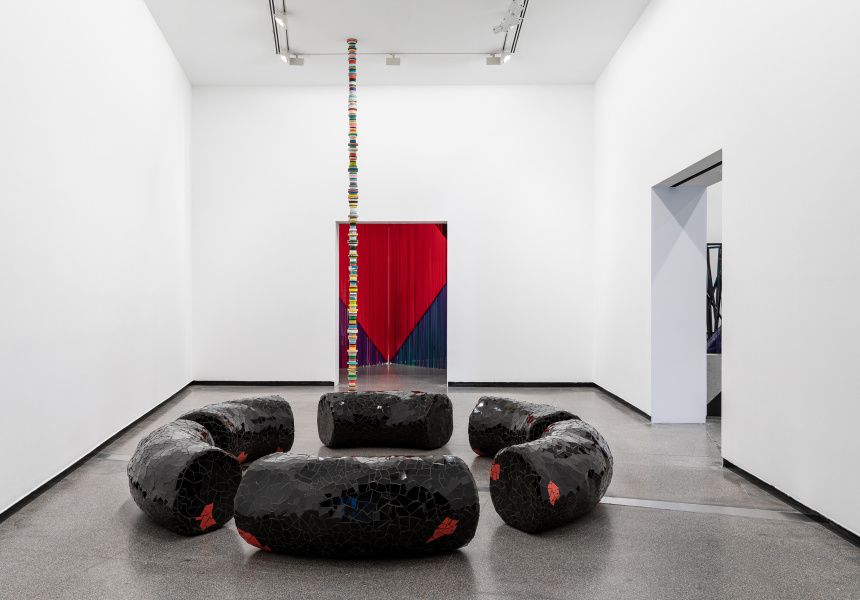 Photography: Courtesy The Approach, London
1/17
by Will Cox
Share

Kosmos by Eva Rothschild
The first thing you see on entering is a pile of concrete blocks painted with a geometric pattern. It appears to be designed as an obstruction. When we met, Irish artist Eva Rothschild spoke to me of “hazard architecture” and how it’s disrupted Melbourne’s landscape. She’s referencing the concrete blocks that now surround places like Federation Square and Southern Cross Station. She doesn’t hate them like a lot of people do. She’s interested in them from an aesthetic perspective. “There’s so much control around the built environment,” Rothschild says. “But these were just dumped overnight.”

The idea of disrupting space carries through to the rest of the show. Iceberg Hits is a five-metre-high punching bag hanging in the middle of the room. And you can walk around and inside Cosmos, a giant tangle of aluminum. The only way to continue to the final room is through A Sacrificial Lair, a cross-section of vinyl curtains.

Most of this work has been made by Rothschild this year, and this is her last show before representing Ireland in the Venice Biennale next year.

Eva Rothschild’s Kosmos is at ACCA until November 25.

Polyverse by Polly Borland
Melbourne-born photographer Polly Borland forged her career in the UK, shooting everyone from Nick Cave to the Queen, but for the past decade she’s focused on more abstract subjects. A lot of the works in this show wear the influence of Borland’s background in commercial portraiture; but what we’re used to seeing when it comes to gender, identity and beauty is sidelined in favour of abstracted bodies. A person wears a bodystocking stuffed with objects. Other models wear stockings over their heads, and wigs covering their eyes, lips and other identifying features. Borland’s camera picks out the pores, recesses, hairs and armpits while limbs layer and contort.

Borland is also working with lenticular 3D structures that show different images depending on where you stand. A series of tapestries are re-creations of her photographs, hand-stitched by British prison inmates through the charity Fine Cell Work, which teams prisoners up with artists to give them meaningful work. One depicts Borland’s portrait of Queen Elizabeth – a person at the top of the social pecking order whose image is worked on by someone at the bottom of it.

Open Book by Tai Snaith
In a part of the State Library that’s been closed to the public for 15 years, a large, new, permanent artwork has been unveiled. Tai Snaith is an artist and author of children’s books, including the charming The Family Hour in Australia. Spanning a 29-metre-long wall, Snaith’s work Open Book is a personal exploration of the library’s collection: a series of enormous photographs of books juxtaposed against found objects that represent them. Snaith has an eye for curios and has pulled out some of the library’s more obscure books on seeds, cacti, typology, flowers and weather. A book on the history of rats is propped open with a 300-year-old rat-shaped lock Snaith found in a second-hand store years ago.

Snaith tells me it’s an ode to the library and places like it. “All of our creative endeavours come from a point in the real world at some stage,” she says. “I wanted to show the act of opening a book, the act of acquiring knowledge, as if you’re physically experiencing it.”

Tai Snaith’s Open Book is at the State Library of Victoria permanently.

The Lost World by John Stezaker
British collage artist John Stezaker does (in a practical sense) very little. Taking to vintage photographs with a blade, he cuts into the past, finding new meaning through simple edits. Most of the images in The Lost World are chintzy, old, forgotten commercial images – advertisements for unloved B-movies and tacky postcards – but he introduces danger, gender ambiguity and slapstick.

Some are very simple: with a series of photos of people cut off at neck level, he obscures identity and implies violence. Perfect circles of white invade images of happy, smiling subjects like inter-dimensional portals, blocks of nothingness in the middle of cosy, sepia-toned worlds. It’s hard to say if the cuts are an absence or a presence. Is he adding something? Or taking something away?

A couple on the verge of kissing become two ancient rock faces, the gulf between them an impassable river with a wooden walkway built alongside it. In the absence of faces, the eye is drawn to complete the face with the information it’s given: a moon is an eye, and a shoreline is a mouth. Hair and geology clash and merge in unexpected ways. Then a mad, flickering video of hundreds of photos in quick succession, faster than the brain can process. New images start forming in the cuts. If you can stand it, dive in as if into river rapids.

John Stezaker’s The Lost World is at the Centre for Contemporary Photography until November 11.

A few other shows I’d recommend checking out: Gertrude Contemporary’s Zzzzz: Sleep, Somnambulism, Madness explores sleep in contemporary art. It includes work by British artist Lee Hadwin, a nurse who – despite possessing no artistic ability in his waking life – draws prolifically in his sleep. CBD gallery Daine Singer is moving to Fitzroy. The first show in the new digs is Luce Rossa by collage artist Zoe Croggon. Croggon cuts up and rearranges images from old Italian porn mags in an exploration of the way the female body is represented in the media. And Mike Parr presents Kindness Is so Gangster at Anna Schwartz Gallery. It’s a series of sculptural works created with senses other than sight, via a process the artist calls “blind negative modeling”.