In the Galleries: Five Shows to See in March

An art collector’s home turned into a neon and LED light show, mesmerising aerial shots of Lake Eyre, Cape York and the Simpson Desert, and an anxiety-inducing karaoke version of Advance Australia Fair. Photography: Courtesy of the gallery
1/27 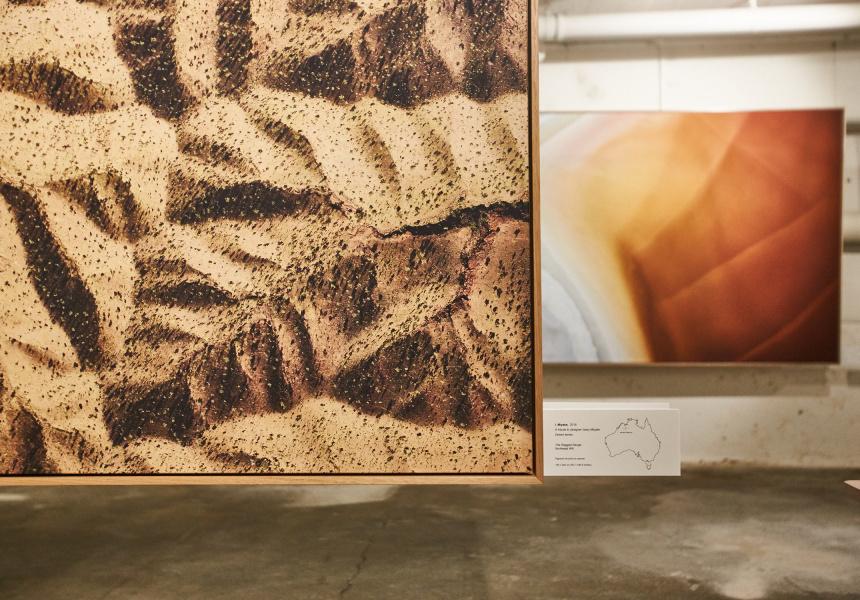 Photography: Courtesy of the artist
1/27 National Anthem and A New Order by various
The ground floor at Buxton Contemporary is home to an assemblage of political statements, from the gently simmering to the outright furious, and seeing decades of despair and rage at the state of Australia all together in one place is electrifying and infuriating in equal measure.

National Anthem brings together 24 artists of different ages and cultures, all commenting on the state of Australian national identity. Spoiler: they’re not impressed. Text plays a big part, from the large billowing white flag with “HOME” written across it (by Abdul Abdullah), to Juan Davila’s trio of oil paintings with phrases like “Un-Australian”, “Die elsewhere” and “Detained” scrawled across them. In a difficult-to-watch video work from 2003, performance artist Mike Parr has his lips sewn together, as nearly 60 asylum seekers in Australian detention camps had recently done.

While you’re looking at other works from Tracey Moffatt, Hoda Afshar and Eugenia Lim, Advance Australia Fair, an anxiety-inducing piece of music for a lot of Australians, can be heard all over the gallery. It’s coming from a karaoke-style video work by Chinese-born artist Siying Zhou, which invites you to perform the anthem in phonetically-translated Mandarin.

The show upstairs, A New Order, is a collection of abstract imagery, spatial distortions and perceptual challenges from artists including Emily Floyd, Diena Georgetti, Daniel Von Sturmer and John Nixon. In several works, time and space are collapsed: Daniel Crooks’ video sends us through dozens of Melbourne laneways, all collated into one space-defying journey, and Marco Fusinato alters pages of sheet music to suggest that we play every note simultaneously in one catastrophic thrum.

National Anthem and A New Order are at Buxton Contemporary until July 7.

Longitude, Latitude, Solitude by Andy Vukosav
Andy Vukosav is a commercial photographer by trade, and initially took up flying light aircraft as a means of escape. But his photographer’s eye took hold. The shots in Longitude, Latitude, Solitude were taken from a camera rigged to the underbelly of his Cessna, from heights ranging between 100 and 7000 feet (above that it gets a bit hazy, Vukosav tells me). The results are compelling.

Vukosav has the advantage that he can go almost anywhere, given enough time and fuel. He flew 46,253 kilometres to take these photographs, which show the variety of the Australian landscape. We see the western side of Cape York, animal tracks in the salt crust of Lake Eyre and the dunes of the Simpson Desert. From this height the landscapes are abstract, shaped by seismic shifts, water and time. At their best, the images recall the landscape paintings of John Olsen.

Let There Be Light by various
For more than 40 years, Charles and Leah Justin have been collecting contemporary art. Now, in the lower levels of their home, a selection of light-based art built on reflections, refractions and projections is open to the public.

On the ground floor, photographer Michael Norton’s image of the moon and clouds recalls the pupil and iris of an eye. David Stephenson uses long exposure photography to turn stars into confetti, effectively using light like paint. But it’s upstairs where things get really interesting, in a darkened room filled with gently oscillating light. To paraphrase James Turrell, whereas most art is about how light reflects off surfaces, this work simply is light.

Gina Jones’s 10-centimetre-square piece made from mirrors, perspex and LED lights creates the illusion of an infinite pit of light. Taree Mackenzie’s Pepper's Ghost, Diamonds, Green and Magenta (2018) throws spinning objects, a one-way mirror and green and magenta LEDs together, letting the eye do the colour-mixing, and Julian Day’s rhythmically flickering neon sign reminds us to “BREATHE IN / OUT”. With most of these works throwing light around the room, you never see one piece in isolation.

Let There Be Light is at the Justin Art House Museum until June 12. Visits by appointment.

Linden Art Prize 2019 by various
The Linden Art Prize is an annual award for artists graduating with a Masters or PhD in Victoria. On show now is the work of the winner, Siying Zhou (who also features in National Anthem above), runner-up Andrew Atchison and six finalists, all interesting voices at the beginning of their careers, mostly concerned with self-representation and culture.

Atchison’s sculptures – a huge hanging mobile of differently weighted objects and a textile möbius strip – are abstract representations of queer identity, while Tammy Law’s photographs reflect the stateless, hybrid existences of refugees by projecting images of Burma onto humdrum Australian domestic settings such as cars, suburban houses and backyard sheds. Shane Nicholas offers a sculpture of a scrappy, glitchy figure with multiple arms and faces. Jaye Early’s confessional-like video works, in his own words, oscillate “between self-mockery and sincerity”.

“Sometimes I don’t know if I’ve had the lived experience to be called Indigenous,” the artist says. “To experience racism … to be treated like a rodent.“

The winning work from Zhou is refreshingly comfortable with its hybridity. Speakers and old TV sets are bound to a sculpture that looks like an eroded rock, depicting two older Chinese Australians making steamed hot cross buns.

The Linden Art Prize is at Linden New Art until April 28.