We speak to artistic director Lesley Harding about Heide Editions, a range of artworks and bespoke objects commissioned to celebrate the museum’s fortieth birthday. 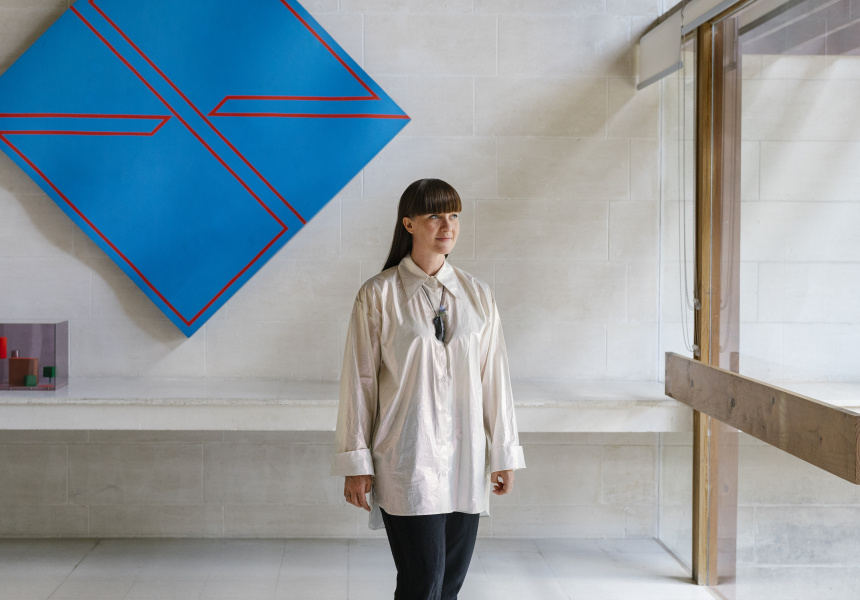 Over the years, it’s had “some fantastic landmark and ground-breaking exhibitions”, Harding says, showcasing historical artists like Louise Bourgeois, Georgia O’Keeffe, Joy Hester, Mirka Mora and Charles Blackman as well as contemporary practitioners like Natasha Johns Messenger, Robert Owen, Kathy Temin and Emily Floyd. But despite this illustrious back catalogue, it remains very much future-focused. “I’m excited about Heide’s future and the prospect of redeveloping the museum to bring us very much into the 21st century in terms of our exhibition spaces and ambitions for our program,” she says.

Heide’s planned birthday celebrations were sidelined by the pandemic, with lockdowns delaying a series of exhibitions marking the anniversary: Sidney Nolan: Search for Paradise and Dean Cross: Sometimes I Miss the Applause, both due to open in 2022, and House of Ideas: Cynthia Reed’s Studio, which opened on November 6. “We tried to triangulate the touchstones of Heide’s past, looking right back to the 1930s when the Reeds first bought the property [through to] a contemporary reflection on Nolan’s contributions to Australian modernism through the eyes of an Indigenous artist,” Harding says.

Covid-19 led to “a tricky couple of years” for Heide, Harding acknowledges, as the programs are planned up to three years out. “All museums have been in the same boat. Dealing with uncertainty is the hardest part,” she says.

However, the lockdown period yielded some positives, particularly “the time to reflect on where the museum is now, how we can do things better and what the next five to ten years is going to look like for us”, she says.

“[We learned that] museums can be spontaneous and flexible and reactive when they need to be. It has also generated a great sense of collegiality among the art community… and new partnerships and ideas.”

One such new idea is Heide Editions, a series of limited-edition artworks and objects created by artists to celebrate the institution’s milestone anniversary, with a view to it becoming an ongoing program. Heide Editions was a “lockdown project” that Harding says began as “a germ of an idea I’d been thinking about implementing for a while”.

“Artist editions are something that have always interested me … [they serve] as an entry level into the art-collecting market. It’s also a way for us to extend the experience of seeing an exhibition at Heide,” she explains. When the pandemic sent normal life into disarray, she says it seemed like “the right time” to make the idea a reality.

Harding invited artists and designers who have a connection with Heide to “create something to help us celebrate Heide’s birthday that responds to the Heide story … or their personal experience of Heide”. Harding likens Heide Editions to buying a 40th birthday gift for a loved one – but in reverse. “I wanted people to purchase something that would support the museum that would also mark Heide’s 40th anniversary,” she says.

Dean Cross, a visual artist, choreographer and performer with Worimi heritage, has created a double portrait of Sidney Nolan and Sunday Reed for Heide Editions. “He picked up a leaf from the beautiful oak tree that John Reed planted behind the original Heide cottage,” says Harding. Using both sides of the leaf, he produced “a symbolic artwork” that Harding says straddles Heide’s past and the present moment.

Glenn Barkley left his role as senior curator at Museum of Contemporary Art in Sydney to pursue his love of ceramics. For Heide Editions, Barkley has produced Lockdown Soap Dish 2021, 40 one-off ceramic vessels created in his inimitable, highly textural style. Barkley has a long association with Heide. “Glenn has co-curated three exhibitions with me since 2012 and curated and exhibited in a fourth,” says Harding. “He has a very deep connection with Heide. He knows the place intimately having worked with us over a number of years, on a number of projects.”

Melanie Katsalidis is a Melbourne-based jeweller who often visited Heide as a child with her father, an architect. “We very much connected over the Heide story,” says Harding. “She loves visiting and thinks it’s one of the most special places in Melbourne.”

Harding asked Katsalidis to design a piece that was “intrinsically Heide”. In response, Katsalidis created a series of opal pendants inspired by three of the strong and singular women associated with the museum. “Mel is very interested in Australian opals and has been working away quietly reclaiming them away from the kitsch tourist market ,” Harding says.

Katsalidis’ offering includes the Sunday pendant, inspired by the museum’s founder Sunday Reed; the Cynthia pendant, celebrating Cynthia Reed Nolan’s contribution to Australian art; and the Mirka pendant, in honour of artist Mirka Mora’s achievements. Mirka is a figure “who we all know and love,” says Harding, who – with her colleague Kendrah Morgan –co-wrote the book, Mirka & Georges: A Culinary Affair. “She’s not only a Melbourne institution but she’s very connected to Heide. We’ve worked very closely with Mirka over the years,” Harding says.

In early 2021, Georgie and Alex Cleary, the sibling duo behind Melbourne label Alpha60, collaborated with contemporary visual artist Patricia Piccinini under the auspices of Heide to create a stunning series of limited-edition jacquard blankets featuring three of Piccinini’s arresting artworks.

“They were eager to work with us again, and we with them,” says Harding of the Cleary siblings. “They too love the architecture and atmosphere and simple palette of Heide Modern.” The designers came up with a raft of ideas, says Harding, “but we settled on a scarf using imagery from our beautiful modernist building”.

The finished product is Stairs in Heide Modern Scarf, a woven jacquard scarf inspired by the museum’s steps, the designers’ favourite part of the space. Georgie, who was married in the gardens, says “Heide is a magical place for us”. 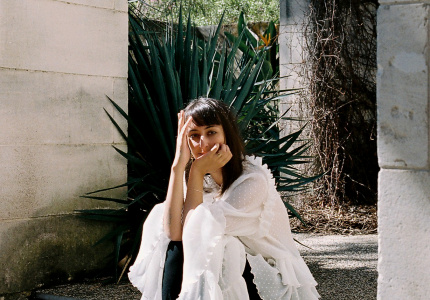