Flowers, giant skulls and collapsing borders – this groundbreaking summer blockbuster is a kaleidoscopic ode to the breadth of artistic experience. You’re going to want to come back. 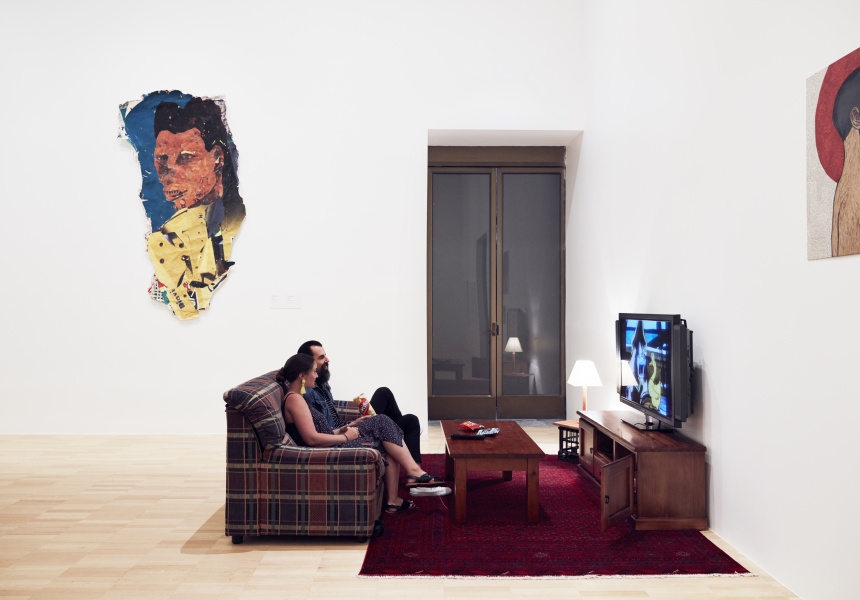 Installation view of Einat Amir, Coming soon near you, 2011–17, on display in NGV Triennial at NGV International, 2017 When I’m finally handed a map and let loose in the National Gallery of Victoria’s inaugural Triennial, it becomes clear I’ll never see it all in one visit. Maybe I should rephrase that. I’ll never take it all in with one visit. And I’m fine with that.

There are more than one hundred artists from 33 countries packed into all four floors of the NGV International, from room-sized installations to unobtrusive little paintings. Space is tight. You might trip over some art, or bump your head on it. In a corridor, there’s pile of painted rocks from Pascale Marthine Tayou. Alexandra Kehayoglou’s Santa Cruz River – a landscape woven from a huge wool rug – covers a floor and climbs up a wall. David Altmejd’s fossil-like blackened polystyrene sculpture hangs upside down from the ceiling in a hallway.

Then there’s the virtual reality pirate ship tucked away on the third floor, which is a wild, if sea-sickening, ride. Beyond that, there’s a work hidden in a QR code that I didn’t have time to download.

The Triennial is a vast, humanist odyssey through a mass of global experiences, incorporating, in no particular order: hallucination, cartoons, bile, death, fashion and religion. Borders are ruptured – between genres and between countries. The movement of refugees is a recurring concern, as is environmental destruction. Everything counts, and everything is intriguing.

Refreshingly, the blockbuster pieces – 20 large-scale artworks were commissioned specially for the exhibition – aren’t all front and centre. Ron Mueck’s huge pile of skulls is on the second floor, hidden behind several rooms of 18th and 19th century portraiture and landscape painting. It’s a complex piece, simultaneously flippant and harrowing. The more conservative wing of the gallery is a perfectly natural home for it, giving it room to breathe away from the louder works, and putting it in the context of the history of art. (Walls full of dead white royal families + giant sculptures of skulls = hearty chuckle).

Yayoi Kusama’s highly-anticipated Flower Obsession isn’t a single room, as we reported it would be back in February. It’s an entire, spacious apartment. In reference to the iconic Japanese artist’s hallucinations, visitors are given a sticker of a red flower and asked to slap it wherever they like. We’re only given one, but clever undercover reporting reveals if you leave and come back, you’ll probably be given another. The walls will be plastered with red florets within a week.

By the time I get there, Kusama’s apartment is already swarming with kids and thoroughly stickered. A child in a bowtie staunchly refuses to vandalise this crisp, spacious apartment, preferring to keep his sticker for later. I leave mine on a wall and exit through a perfectly white room of shiny silver Nendo manga chairs, which you can absolutely not plaster with flower stickers.

Back in the real world, the rollout of the Triennial has been besieged by protests over the gallery’s continued contract with Wilson Security, the firm that also services the offshore detention facilities on Manus Island and Nauru. At a VIP preview on Thursday night, protesters blocked the main entrance, and donors and artists snuck in a side door. On launch day, it became apparent that the protests had influenced the art itself. The works of artists Candice Breitz and Richard Mosse, both of which directly address the refugee crisis (Mosse, in one of the most staggering and affecting pieces in the exhibition), have been altered at the last minute to call out the connections between the gallery and Wilson.

Given the subject matter, it’s a powerful move to use these works to critique the very institution that houses them. To its credit, the NGV has embraced them. In a statement to Broadsheet, a spokesperson said simply “the NGV supports artists’ rights to express a range of viewpoints.” Broadsheet understands Wilson was appointed by the state – not the NGV – and the gallery will reassess its security through a tender process.

In light of all the politics, I haven’t even mentioned Sissel Tolaas’s scented, playful sculptures, which you'll go up to and sniff and rub – despite feeling like an idiot. Or Brodie Neill’s inky table made from blue and white plastic waste from the ocean. Or teamLab’s addictive interactive installation, in which your movements create waves on the floor. Your actions, the work reminds us, impact your surroundings more than you could anticipate.

It’s a little overwhelming. It’s very, very easy to walk straight past Paulina Olowska’s paintings, which draw on realist portraiture and Slavic folklore, because you’ve caught a glimpse of Neri Oxman’s 3D printed death masks in the next room, or because you’re distracted by a group of teenagers sitting on an op shop couch with a packet of Twisties, watching knockabout comedy The Benchwarmers on DVD.

As I said, you’re going to want to come back. Multiple times. And why not? It’s free.

The NGV Triennial is on until April 15.