The much-hyped concept is by the man who brought us Bar Americano and Der Raum. He hasn’t opened a bar in Melbourne in almost four years – and he’s hoping this one’s polarising. 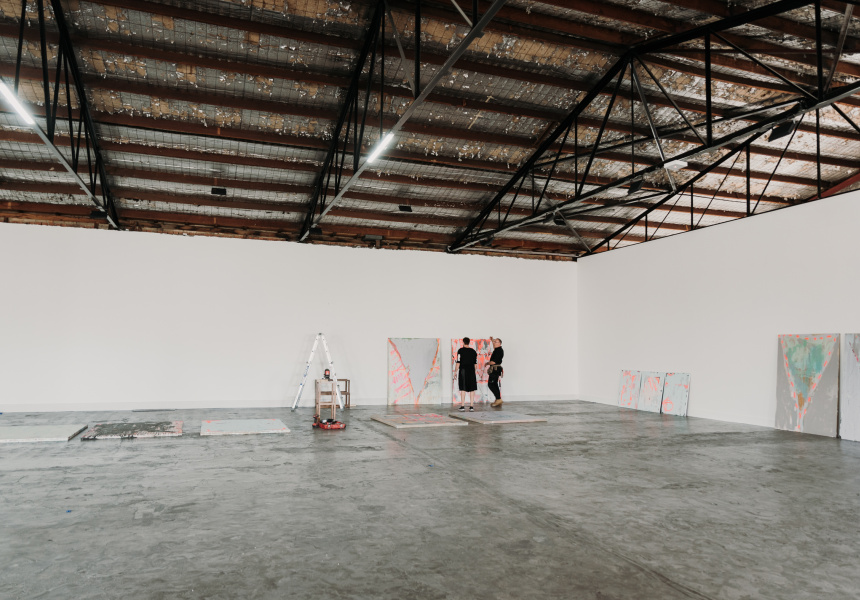 Matt Bax is known for creating unconventional spaces. In 2001 Der Raum set the pace for cocktail bars in Melbourne, with bottles hanging from the ceiling and syringes filled with Aperol. After that came Bar Economico, delivering Jamaican shanty vibes to Richmond, and hidden behind it was Bar Exuberante, dripping with Wes Anderson quirk.

They are all now closed, but we still have Bax’s ever-charming Bar Americano, the 10-person, standing-room-only speakeasy with Italian influence.

Now Bax – who is an artist as well as a bar virtuoso – is turning his attention to an ambitious gallery-bar amalgamation called Grau Projekt. It lives in a 1050-square-metre space (Bax describes it as “really, really, really big”), where contemporary art will be shown alongside bespoke drinks matched to the works. As you walk up the stairs and enter the main room, the huge expanse of the space is revealed, and light spills in through large windows that wrap around the building. But Bax is less concerned with the canvas.

“The walls and room shouldn’t take centre stage,” he says. “Art is great, drinks are great, consuming them together is amazing.”

Grau Projekt is almost four years in the making, and while the former clothing factory has been left pretty much as he found it, Bax calls it the “most intense” project he’s ever done. He says even the most minor tasks were made complex simply because of the scale of the space.

Bax is launching the gallery with his own Cockrocker exhibition; what he describes as challenging modern sensibilities around masculinity. He refers to it as “dick-swinging abstract art”.

“I think we live in a society now looking to be offended,” Bax says. “Masculinity is just as relevant as any gender discussion but today it seems to be a dirty word.”

But the idea of celebrating masculinity with “dick swinging” art is an out-dated and binary reflection of gender in 2018. Masculinity and dick swinging increasingly don’t – and shouldn’t – go hand in hand. Bax wants to be controversial, but it’s hard to know if he’s out of touch or being deliberately provocative. Either way, the abstract nature of the works leave it all very much up for interpretation. The fact they look diminutive sitting under the exposed industrial roof, on the gallery’s 4.5-metre-high stark white walls, could be a statement in itself. Bax is well aware that not everybody will be interested in the art though, and reckons a cocktail at dusk looking out from the graffiti-covered windows, without “the glare of studio lighting” you often find at a gallery is worth a visit alone.

There are five cocktails to choose from, all exploring the same themes as his exhibition. Bax’s almost mythical Hot Cold Pina Colada returns, but now with new name: +/- Pinas (we’ll let you read into that what you will). Then there’s Krug or Krap, a tribute to artist Francis Bacon, and Are You Woman Enough To Be My Man, a red cocktail that’s a nod to the Pearl Jam lyric and Eddie Vedder’s love of wine on stage. Drinking Alone With my Bluebird takes influence from Charles Bukowski and features Scotch, fruit and herbs. And it wouldn’t be a celebration of masculinity, booze and art without a tip of the captain’s hat to Ernest Hemingway. Here, the Pilar Panache celebrates Hemingway’s wife and his favourite drink – Vermouth Panache – but gives it a Spanish twist with fino (similar to dry sherry) and Pedro Ximenez.

Victorian artists Ravi Avasti and Suzie Blake are next to exhibit, and from there Bax has a long list that includes some big international targets. Although he won’t be drawn on names just yet, with his international reputation both in the cocktail and art worlds, Bax is probably the right person to pull it off. He’s well aware of how divisive this could all be, but that sounds like it’s part of the fun.

“The best thing about art is that it doesn’t have to appeal to everyone all of the time,” Bax says. “If everyone loved every show we put on, something would be very wrong with our curating.”

There is no charge to visit the gallery, but to purchase a drink visitors will need to book a gallery tour. Tours cost $25 with one drink, or $40 with two drinks. Cockrocker launches Thursday November 22. Tickets here.