Produced by Broadsheet in
partnership with Australian Centre for Contemporary Art.

Pop culture meets philosophy in Feedback Loops, a new exhibition by artists drawing on aesthetics of the internet to create new worlds. In partnership with ACCA, we speak to the curator behind the exhibition. 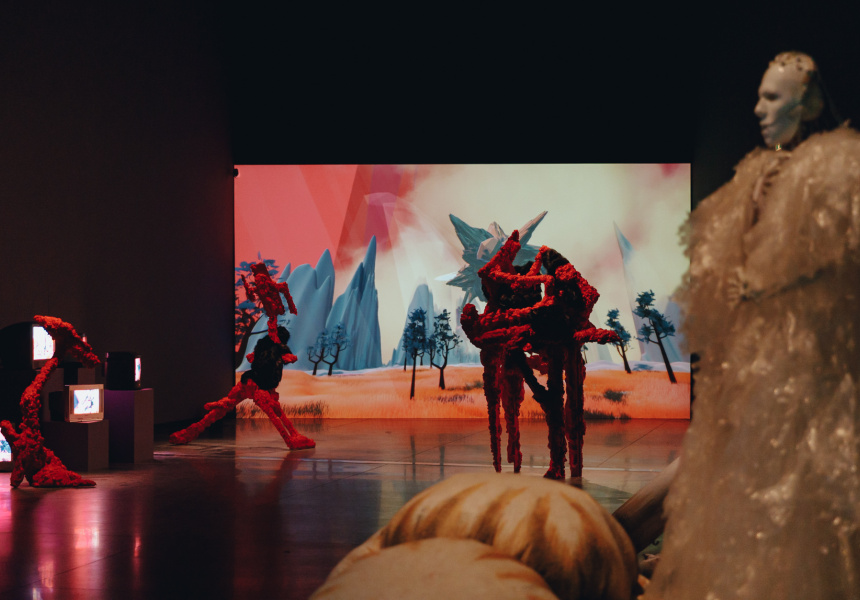 Feedback Loops is a new summer exhibition at the Australian Centre for Contemporary Art’s featuring immersive, technological-minded artworks by six contemporary artists born in the 1980s.

According to ACCA curator Miriam Kelly age isn’t all they have in common. The group’s embrace of technology in their work shows “just how much impact technology has had on how we think, the way we engage with each other and the world around us” says Kelly. “[They] have a very natural approach to new media. For them, it’s just another tool among many. Or as [participating] artist Lu Yang describes it, the way she uses computer game development software is ‘just like a painter uses a paintbrush’.”

Working in performance, digital media and installation to interrogate how we make sense of our past, present and future “in fantastical and spectacular ways,” says Kelly, the group’s comfort with gaming software and CGI, as well as ripping and repurposing online content, sits alongside the material practices of sculpture, textiles, drawing, painting and live performance to explore links between popular culture, mythology, spirituality and philosophy.

Kelly says it’s this relationship with technology and new media that sets them apart from preceding generations. We asked her to give us a breakdown of each artist and their work.

Set to a pumping techno soundtrack, the game is Yang’s most ambitious to date, says Kelly. “[It’s] a brilliantly nuanced exploration of moral and philosophical considerations of belief, spirituality, fear, desire and posthuman philosophical debates,” says Kelly. “When you start playing the game, you find Yang actually challenges you not with fights or feats, but rather with philosophical questions about life, the universe and our material world.”

Madison Bycroft
France-based, Adelaide born Madison Bycroft is another artist presenting a live performance as part of Feedback Loops. Philosophy, art history, mythology and pop music references populate Bycroft’s performance art and video installations, “sampled liberally from the internet in the form of found video footage, images and music,” says Kelly, “along with purpose filmed new performances. You’ll never entirely know the whole meaning of Madison’s work, but that’s sort of the point. Madison throws up all of these signifiers that land in new and beautiful ways, disrupting meaning and interpretation but also creating this wonderful holistic image.”

Bycroft’s works – like fellow-participating artist Zadie Xa – “are ‘mash ups’ that characterise the way we’ve become accustomed to consuming images in the post-internet age,” says Kelly. “Both Bycroft and Xa’s video artworks bring together high and low culture in the same visual sentences. Their works are playful and funny, but also richly layered with meaning.”

Zadie Xa
Personal mythology, the role of women and the Korean diaspora are central to the practice of artist Zadie Xa, who was born in Canada but lives and works in London. Her work draws on an array of influences, from shamanism and marine life – particularly orcas, which live in matriarchal societies – to pop culture and fashion.

For Feedback Loops, Rahal has created large-scale sculptures from found objects, including old furniture and discarded industrial materials, which he coats in builder’s foam and paints. “They become quite like animals or creatures, but not creatures that we know,” Kelly says.

Justin Shoulder
The career of Justin Shoulder, an Australian performance artist who presents live works in theatres, galleries and the queer club scene, has grown exponentially since Kelly first met him in 2013. For Feedback Loops, Shoulder is developing the character of Carrion, one of a series of alter-egos he embodies in his work. Shoulder echoes the exhibition title with a costume made from found plastic, which will be worn by the artist during a live performance at ACCA in February. “Shoulder describes this performance as Carrion episodes,” says Kelly, “named after one of many fantastic creatures he embodies. He seeks to explore all aspects of what it might be like to live as one of his characters. How they see, feel and experience the worlds they inhabit, how they might communicate, and how their environment – along with costuming aesthetics that define their physical form – impacts their bodily movements.”

Tianzhuo Chen
Tianzhuo Chen is the driving force behind multidisciplinary performance art group Asian Dope Boys, and an artist Kelly has been following since she saw his solo exhibition at Palais de Tokyo in Paris in 2015.

Chen’s work, influenced by both Buddhist art and British rave culture, considers the possibility of reframing the nightclub as a modern-day temple. The Chinese born, globally celebrated artist is known for his “free-minded approach to sampling and popular cultural references,” says Kelly, as well as his personal reflections on collective consumption and spirituality.

“His works are highly distinctive, exciting and a little bit provocative,” says Kelly. “The new videos in Feedback Loops oscillate between demonic divine warning of the impending apocalypse and whole-hearted embrace of hedonism , where everything and nothing are sacred.”

Feedback Loops is on now at ACCA until March 22, 2020. Find out more about the performance program here.

This article is produced by Broadsheet in partnership with ACCA.

Produced by Broadsheet in
partnership with Australian Centre for Contemporary Art. Learn more about partner content on Broadsheet.