A step forward – or a potential backfire? 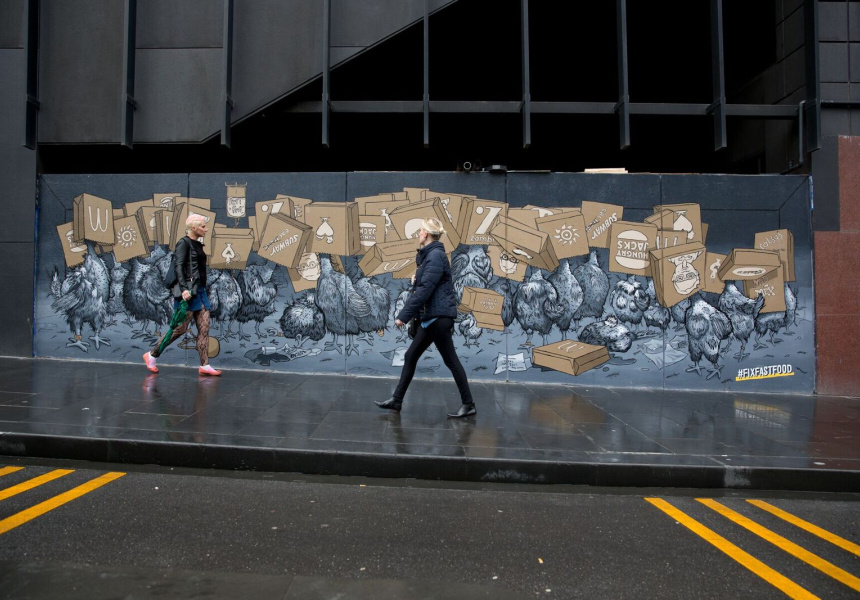 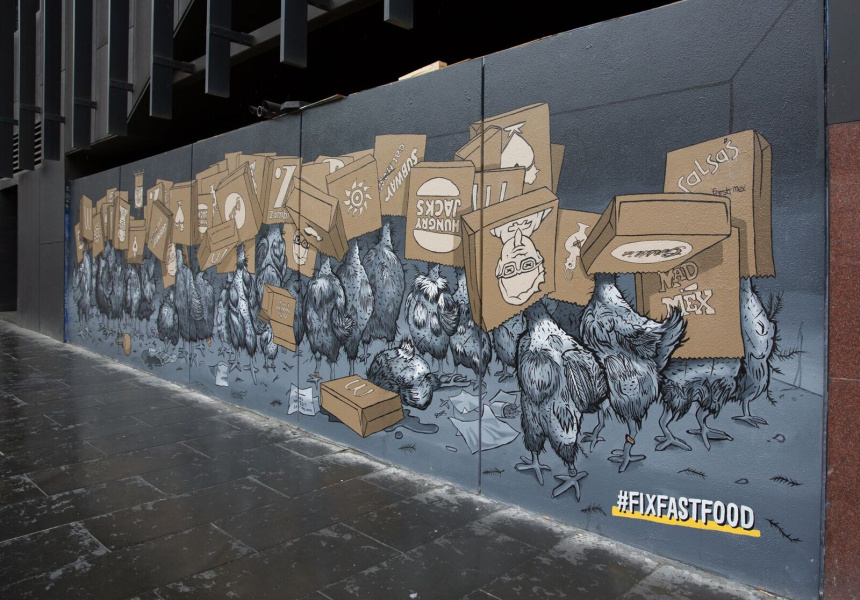 McDonald’s. Hungry Jack’s. Subway. KFC. Mad Mex. Grill’d. These are a few of the fast-food restaurants explicitly named and shamed in a new mural on La Trobe Street. Many of the stores are within eyesight of the mural. Nando’s is next door.

Unveiled last Friday, the mural features imagery of sick-looking or dead chickens with chains on their legs and branded paper bags over their heads. Between the confronting pictures and the underlined #fixfastfood in the corner, it’s obvious the mural is there to stir up talk.

But who’s behind it, and what are their motives?

Although it doesn’t say so anywhere on the work, the mural, painted by Apparition Media, was commissioned by Mexican-food franchise Guzman y Gomez as part of its Fix Fast Food campaign.

The campaign is intended to draw attention to Guzman y Gomez’s decision to serve 100 per cent free-range chicken across its Australian stores. On the Guzman y Gomez website, a graphic explains its chickens, supplied by Lilydale, have access to outdoor areas, are not treated with antibiotics and do not have their beaks and toes trimmed.

As part of the campaign Guzman y Gomez is also organising a “Freedom Rally”, on Friday September 16 in Sydney’s World Square to “make a stand for free-range chicken”.

Lilydale is owned by Baiada Poultry, one of Australia’s largest poultry-processing companies. The parent company has previously been under fire for falsely selling products as “free range”.

For a fast-food chain that sells meat to call public attention to its animal-welfare practices is a risky move. Even riskier is throwing stones.

Especially becauses Guzman y Gomez isn’t the model of perfect ethical practice. For example, it does not serve free-range pork.

Can the company handle the stones that will be thrown back?

“It’s pretty disruptive, what’s on that wall,” he says. “It’s going to create a conversation, which I think has to happen.”

Although Guzman y Gomez’s new stance on free-range chicken might influence the way big fast-food outlets buy chicken, it’s hard to ignore the publicity that calling out its competitors will bring.

Marks says he made the decision to commit to free-range chicken in June, despite it costing his business an extra 20 per cent.

“Sixty per cent of what we sell is chicken,” he says. “I said, ‘I can’t do this barn-raised chicken anymore – we’re going free-range. And it’s a lot more expensive.”

Free-range accounts for around 15 per cent of the Australian chicken-meat market. Marks believes fast-food companies have the scale to influence meaningful growth in free-range farming in Australia.

“If we can create this conversation with traditional players and convince them of what the benefit of this is, you can create huge change. Because they buy so much,” he says.

Guzman y Gomez commenting on animal welfare – and leading rallies on the issue – is going to invite legitimate questions about a company that can’t yet claim sow-stall-free pork (a cruel practice that confines sows in small cages).

Marks says the plan is for Guzman y Gomez be completely sow-stall free and have free-range pork on the menu, although he can’t say when.

So what’s the hold up?

“The problem is free-range for pork in Australia is such a small market. There’s a supply problem,” Marks says. “So you need conventional pig farmers to believe that higher welfare can be sustainable and profitable.”

Major American fast-food chain Chipotle Mexican Grill famously professes its commitment to animal welfare and serving “food with integrity”. It released a series of emotional videos on YouTube demonising factory farming and boasting about its support of honest farming.

In 2015, Chipotle stopped serving pork at a third of its restaurants after one of its suppliers was found not to be meeting the company’s ethical standards. Two years prior, Chipotle reverted to serving “conventionally raised beef” after it became clear there was no longer enough antibiotic and hormone-free beef to meet demand.

At the time, a Washington Post opinion piece said: “The company’s success has also been a lesson in how hard it is to scale the entirety of a business like Chipotle, with its promise to sell ‘food with integrity’.”

Guzman y Gomez, which launched in Sydney in 2006, currently has 74 stores Australia-wide (as well as two in Tokyo and four in Singapore). It’s still rapidly expanding, raising questions about whether its scale will ever be able to realistically support an accountable and sustainable model.