After more than 10 years as a wholesaler, fashion label Viktoria & Woods began its foray into retail last year. To translate her philosophy into a physical space, founder Margie Woods turned to designer Fiona Lynch. 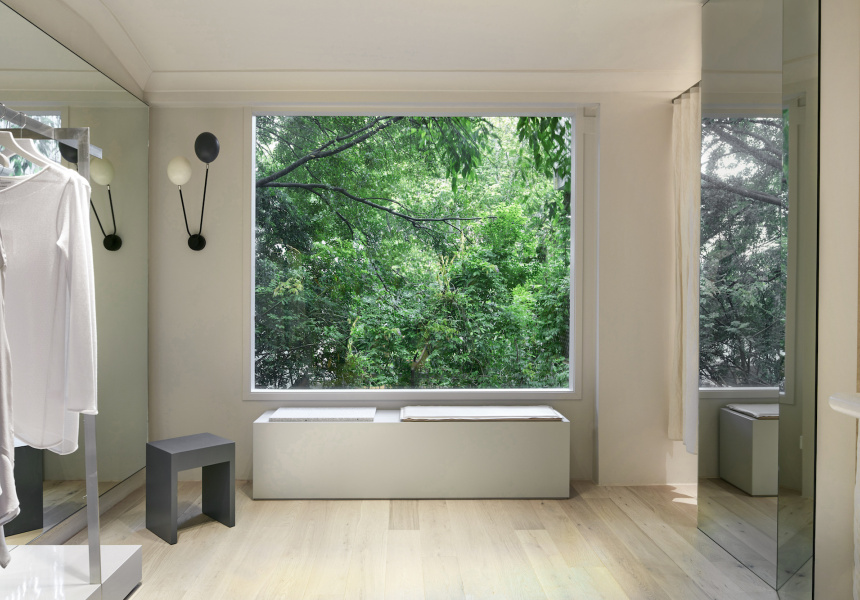 The new look Viktoria & Woods boutiques are not an overhaul, but rather a mark of quiet evolution for a brand whose foray into retail is still relatively fresh. “My commitment as a designer is to keep it simple and hopefully meaningful,” Viktoria & Woods director Margie Woods says. “I want to make sure each item feels more cherished in the wardrobe. It’s the same approach to the interior space. I want the customer to feel a simplicity and approachability.”

Woods and Lynch first worked together on Viktoria & Wood’s Paddington boutique in Sydney earlier last year. There’s continuity between the stores – a tonal palette of greys, creams and white, and a balance between soft femininity and an industrial feel. Subtle details are adjusted to reflect each location. At the Paddington boutique, the building façade is kept in line with the other fronts on Glenmore Road.

At the Emporium store – which Woods describes as a “blank slate” – customers are welcomed through an angular, textured grey archway. A supple caramel-coloured leather ottoman sits in the centre of the room, while a sculptural counter juxtaposes a razor-thin steel shelving unit behind it.

“Fiona’s work has this modern femininity,” Woods says. “She really aligned with our brand, and also challenged me with concepts that enhanced the store.” As an example, Woods had initially imagined a store with wood floors and marble countertops – Lynch, in contrast, encouraged the use of different materials. “From the memory curtains that kind of stiffen when you crush them, to the angled mirrors,” Woods explains. “It didn’t feel similar to anything I’d seen before in a retail space.”

Lynch sees her role as being something beyond the bricks and mortar design, as helping businesses build their brand and story.

“We wanted to make Margie a force within the industry. Designing a store can actually do that. You’re curating how you want your clothes to be seen, rather than relying on others to display your clothing.”

“The experience is much more holistic now,” Woods adds. “We’ve mostly been a wholesaler before the last few years.”

For Lynch, the pressures of retail add to her sense of responsibility. “Knowing how much rent the brand pays, you just want to make sure people understand and enjoy the brand,” she says. “People may not necessarily know why they like coming into the space but there are all these little clues as to how to do that. It’s about having elements that are unique.”

She points to a bespoke light by Melbourne designer Christopher Boots, which hangs near the entrance of the store. The linear glass tube, affixed to a piece of onyx could easily be mistaken for a piece of art.

Another unique point is the natural light flowing through the back of the store, a rarity in a shopping complex like Emporium. “Originally the design was to cover the windows,” Woods says. “We decided to let natural light come in.”

“Those steel windows are part of the building’s heritage,” Lynch adds. The pair made a similar decision at the Paddington store, choosing to retain an existing window looking into the lush courtyard. “Rather than having artwork, we let the outside come in,” Woods says.

“Collaborating is a different way of looking at the very same thing,” she says. “It keeps things exciting, fresh and I think it makes me more creative.” 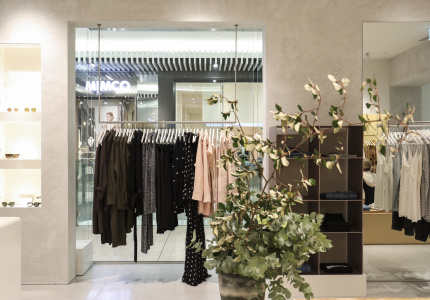 Unapologetically Blak and What It Means To Me