The sea air was tinged with the smell of gunpowder in Williamstown yesterday as the Chinese-born, NYC-based artist lit the fuse on a new gunpowder painting. 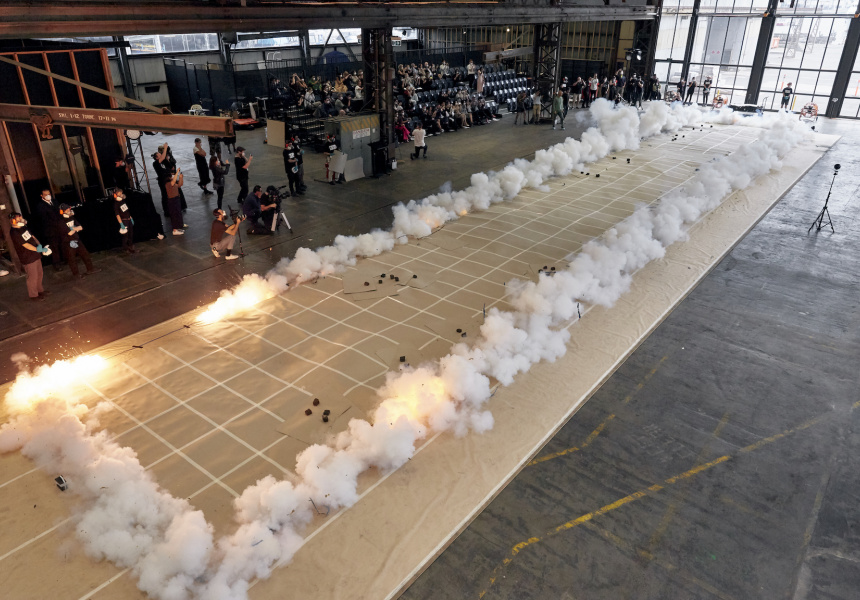 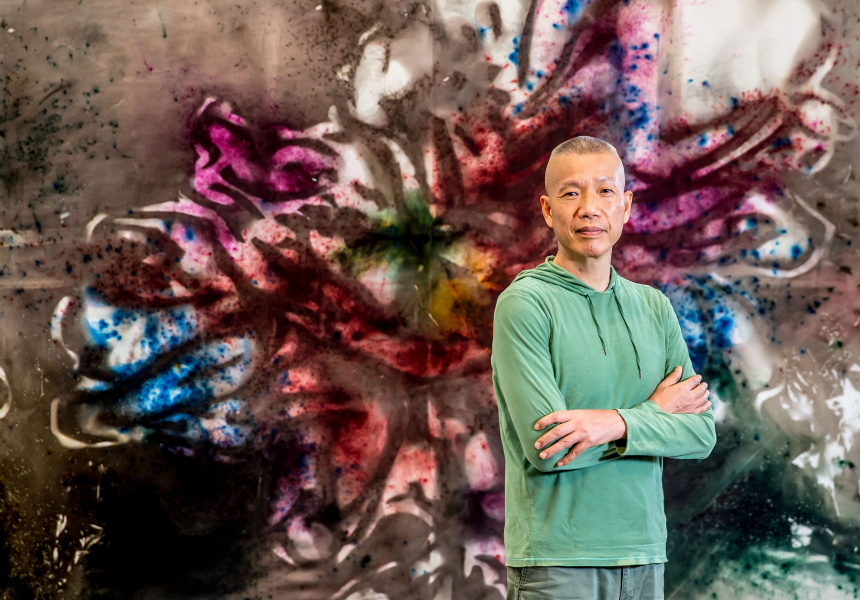 In the shipyards of Williamstown, a huge warehouse has been converted into a makeshift studio for visiting Chinese artist Cai Guo-Qiang. A 31-metre panel of cardboard is stretched along the floor and weighed down with bricks. Beneath it are 11 layers of silk, cuttings from trees, shrubs and flowers, and the key ingredient: a smattering of gunpowder. And at one end, there’s a fuse.

In a few minutes, this will be Transience II (Peony), a new artwork commissioned for Cai’s exhibition at the NGV, The Transient Landscape, opening in May. The NYC-based Chinese artist draws parallels between contemporary and ancient Chinese cultures, and is known for his explosive art.

Today’s work is the third and largest of the gunpowder paintings Cai has made for this show. According to the artist, the work we’re seeing made today will depict the blooming process of the peony flower, but for now it’s just coloured gunpowder sprinkled on silk.

There’s a lot of interest in Cai’s work, and there’s a huge media presence for this fiery display. Journalists and photographers are directed to a row of bleachers to watch the piece burst into existence. Under every seat is an envelope with a paper facemask and a pair of earplugs.

It’s a huge undertaking. Dozens of assistants in black NGV T-shirts are on hand to assist Cai, and dozens of cameras are poised to capture the moment of creation.

The artist has been here since early this morning, drawing complex gunpowder patterns straight onto the sheets. He’s tired, but a consummate showman.

“Making an exhibition is like having a relationship,” he tells us, through his studio manager and translator. “Making a gunpowder painting is like making love. It’s very spontaneous and passionate. So, like making love, I won’t say too much. If it’s good you’ll know, and if it isn’t, I’ll try harder next time.”

It’ll take three seconds, Cai tells us. Then he approximates what it might sound like, which is “drrrrrrrrrrrrrrum”.

He lights the fuse and steps back. The blast lasts a single second. The crowd jumps. Smoke billows. A smoke alarm whirs into action, which someone thankfully switches off. Then it’s over.

The team steps in and starts cleaning up bricks, layers of charred cardboard, a scorched plastic sheet and some burnt branches as the smoke escapes through the open warehouse door. Finally, about a quarter of the finished work is salvaged from the wreckage and nailed up on a white wall for us to see. From a moment of noise and light comes a charred painting of peonies in bloom, splattered with purple and blue. Cai looks pleased. The gunpowder smell mingles with the sea air.

Transience II (Peony) will debut as part of Cai Guo-Qiang: The Transient Landscape, opening at the NGV on May 24.