The Evolution of Ben Quilty

After taking his exploration of Australian identity and masculinity to Europe, the Archibald Prize-winning artist is in Victoria for a new exhibition. 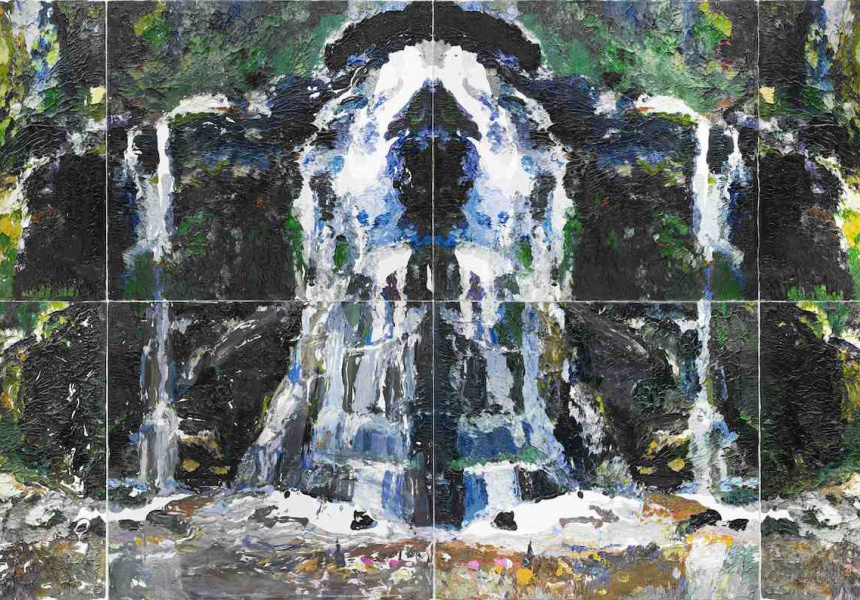 Broadsheet last visited Ben Quilty at his studio in country New South Wales in February 2014. He’d just won first prize at the Prudential Eye Awards in Singapore, an honour that included a solo exhibition at London’s Saatchi Gallery in the middle of last year.

“It was surreal in the lead up to it and it feels unreal now,” Quilty says of the experience. His voice is gravelly and his manner is relaxed but energetic as he talks about the anxiety surrounding that landmark show. He pays tribute to the installation team at the contemporary art gallery – a “smart, down-to-earth group of people” who “helped take the edge off.”

It’s difficult to imagine Quilty on edge, although it’s not surprising he felt nervous. He’s the first Australian to have been granted a solo show at Saatchi, an institution with a reputation for igniting the careers of the emerging artists who show there and one of the most visited galleries in the world.

The suite of works in that exhibition – two enormous landscape paintings, one massive self-portrait and a 16-picture series called Inhabit – has since been crated and shipped back to Australia – specifically, Victoria, where it will be on show at the Bendigo Art Gallery until March 1.

The exhibition showcases Quilty’s expressive compositions, which explore Australian masculinity, identity and history. It’s an understatement to describe his work as painterly – his colourful canvases are covered in thick, tactile licks of oil paint that can take up to three years to dry. For one of them – a portrait of artist Margaret Olley – he won the 2011 Archibald Prize.

The Inhabit series on show in Bendigo is from 2010, and moves from abstract and figurative images of Captain Cook into self-portraits and then, “Into obliteration,” Quilty says.

The paintings are, “A light-hearted take on my own role in the colonisation of Australia, placing myself in that heritage,” he explains. It’s a subject the 41-year-old artist explores regularly.

The two giant landscape paintings in the exhibition also deal with the history of white settlement in Australia, specifically its darker parts. Fairy Bower Rorschach and Evening Shadows, Rorschach after Johnstone both depict places where Aborigines were massacred.

These ambitious, multi-panelled landscapes – which Quilty fashions by pressing canvas against canvas to get the mirrored image – are named for the famous psychological inkblot tests conceived by Dr Hermann Rorschach in the 20th century.

“Looking at a Rorschach is about psychoanalysing yourself, about discerning who you are and working out what’s wrong with you,” Quilty explains. His own Rorschachs coax viewers to question and rethink the seemingly picturesque, untainted landscapes in front of them, and also make a comment on his own frustration with the treatment of Indigenous Australians, past and present.

The multi-painting series he had intended to show at Saatchi instead of Inhabit was a newer collection of familial portraits, called Straight White Male. They are about, “A sense of place and identity and Australianness, and the fractured and flawed nature of my own Australianness,” he says. “I don’t want to over-theorise things, I just try and tell the truth about my own existence.”

Straight White Male is currently on show in Hong Kong at Pearl Lam Galleries, one of Asia’s premier contemporary art exhibitors and dealers. Quilty says having a presence and, “Really serious representation in Asia has always been a goal.” His reputation, and his practice, is evolving.

In recent years Quilty's evocative portraits have extended to porcelain forms and beyond the painted works that made him famous. These ceramic pieces came about because of a painting he did of a Vietnam War veteran called Private Phil Butler. He painted Butler with a handle attached to the side of his head – a symbol of his conscription.

“I often make paintings with the idea that I’m making a sculpture in two-dimensional form,” Quilty explains.His porcelain heads are shiny and misshapen with melancholic or tormented expressions. He has sculpted faces – all men, all white – onto earthenware washstand jugs he found in antique stores all over Australia, vessels that were then recast in china.

“By learning a new language you’re improving your toolbox; you’re expanding the tools that you have to tell the stories that you want to tell,” Quilty says. “Often its not very pleasurable starting to use something else,” he adds. “To start using watercolours, for example, is very tedious and incredibly stressful. But once you learn how to use it, it’s like magic. Suddenly you have command over something that up until recently you had no idea how to use.”