We visit internationally recognised taxidermist Gary Pegg in his Melbourne warehouse studio to talk about his unusual career choice. 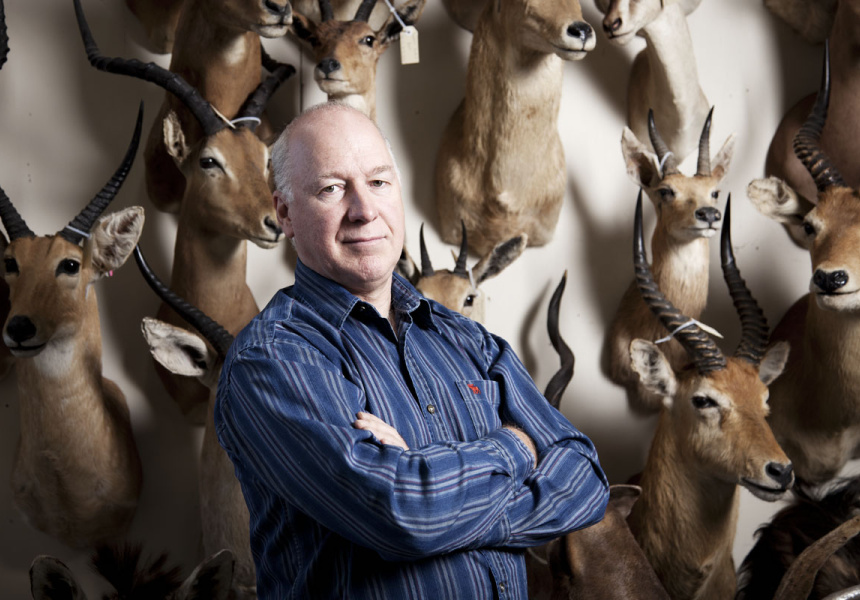 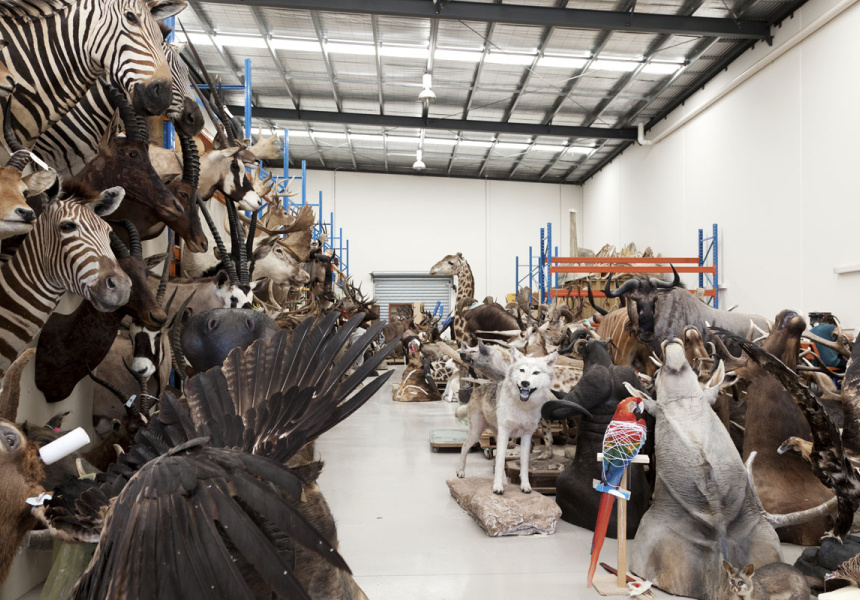 On meeting master taxidermist Gary Pegg at his northern Melbourne studio, the initial feeling is one of relief. While most would expect this industrial site in the back blocks of Thomastown to resemble a house of horrors, Pegg’s warehouse for the deceased maintains a very different air.

Animal heads fill the wall space and spill across the floor of the factory, the only one of its kind in Australia. While most taxidermists work out of backyard studios, Pegg’s South Pacific Taxidermy is the only commercial premises in the country that operates on this scale. Here you can find anything from elegant antelopes and well-groomed deer, to cheeky foxes and enormous elks, all combined to form a mix-match menagerie.

The day we visit, Pegg’s team, consisting of two fulltime employees, work quietly in the background. They are busy removing the skin from a dog, someone’s beloved pooch. It is a time-consuming task, yet surprisingly not all that messy. Prior to its removal, the skin is first preserved through a tanning process, to prevent the break down of any naturally occurring bacteria. Pegg and his team then go about reconstructing the body of the animal through the use of moulds or hand carved sculptures, discarding the skeletons along the way.

“It’s not like doing paperwork, where you’re just fiddling with numbers or the same old, same old,” says Pegg with a smile.

Pegg has sold his work internationally to clients including the Prince of Saudi Arabia (who commissioned some kangaroos) and the Hong Kong Jockey Club. Closer to home, a giraffe moulded and stuffed by Pegg now enjoys Friday night drinks with punters at the Carlton Club, while schools are examining his specimens in their biology departments. Pegg also finds himself renting animals to the film industry for special effects, from Heath Ledger's Ned Kelly to two of his polar bears starring in a Bundaberg Rum commercial.

Deceased beasts haven’t always populated Pegg’s world. In the late 1970s, he experimented with a more conventional professional life, working as a draftsman for six years in the public service. But taxidermy was a lingering passion. It all started in his youth in rural Victoria. An old taxidermist in his hometown of Shepparton – who, following one of many hunting expeditions, stuffed some ducks for the family – sparked Pegg’s initial interest and it all snowballed from there. Today, the 53-year-old is the only Australian taxidermist (and one of only a handful outside North America) to have received certification by the National Taxidermists Association of the USA.

Compared to America, the Australian taxidermy industry is considerably small, so when strangers learn of Pegg’s peculiar profession, he often becomes the topic of conversation. “They meet plenty of builders or accountants or lawyers or teachers, but when you tell them you do taxidermy, they are very curious,” Pegg says.

Perhaps taxidermy draws some parallels to the zoo and the museum, both of which give us the opportunity to discover and observe exotic animals up close or in captivity. Pegg always finds it interesting to observe people's reactions when they visit the studio for the first time.

"We've had people who are a little bit dubious when they arrive, expecting that maybe they’d be offended. But you can see almost relief in their face. They’ve just been fascinated and spent the rest of their time looking around amazed.”

When taxidermy originated in the 1700s, it was considered a crude and unrefined process in which animals were literally gutted, stuffed with rags or cotton and sewn back up for display. With no means of preservation, the creature would eventually rot. “I think it’s a legacy of what was back then, and that’s all part of the evolution of our whole entire industry,” says Pegg. “Nowadays, because the public perception of what we do is so intense, we have to conform to all these requirements, which then legitimates what we do."

With the laws as they stand on hunting native wildlife and game species, it is a very stringent and quality-controlled process. Federal government departments such as quarantine and customs make it one of the most regulated industries around.

When asked about the psychological or emotional impacts of working with dead beasts, Pegg explains: “You develop a sense of what you need to do. You look at it more as a process, rather than getting too concerned about the gory sides of it, or the things that people think are gory. You think of it more as a challenge to achieve the task.”

Speaking of which, it was the challenge preserving a rare mountain gorilla named Buliman from the Melbourne Zoo that stands out most in Pegg’s memory. “It was scary in a way,” he recalls. “They are just like us. To see the nails and the fingerprints, it really does hit home just how close we are to the great apes and where we are in the circle of things.”