Broadsheet heads to New York to catch up with Peter Lawrence, who left a career managing Melbourne nightclubs to open a hotel in a big old factory on the Brooklyn waterfront. 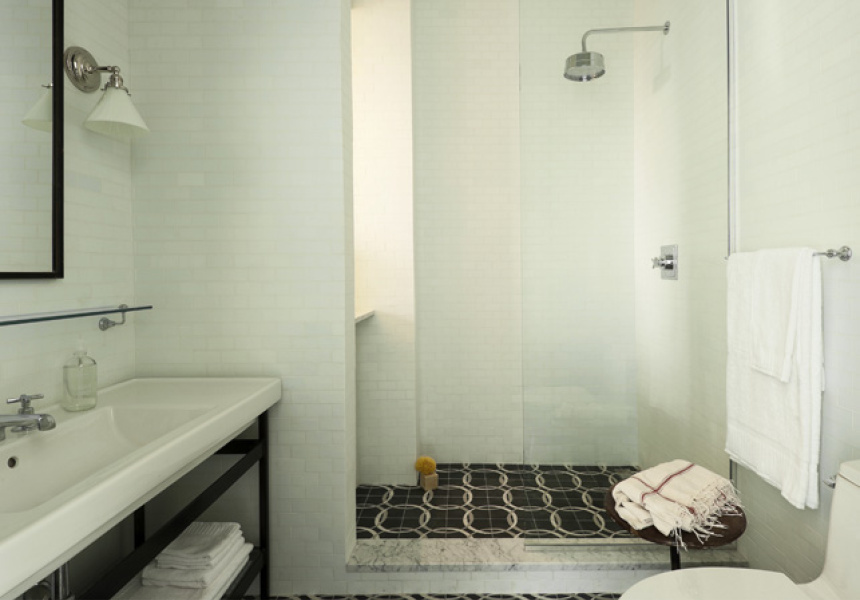 If you walk a few blocks west from the Brooklyn hub of Williamsburg, you'll find yourself in a quiet, post-industrial neighbourhood perched beside the East River, overlooking the vast Manhattan skyline. One of the large, unassuming brick buildings you’ll encounter is adorned with five letters in a vertical configuration, which read: ‘HOTEL’. The road sign above you reads: ‘WYTHE’.

In an industry that is typically geared towards vacationers and those less concerned with the local community, the Wythe Hotel stands apart on several levels. “We want it to be a local place for people that live and work and play in the neighbourhood, whether they come at 5pm with their kids for a glass of wine or at 11.30pm on their way home,” explains Peter Lawrence, one of the three partners (along with Andrew Tarlow of Diner and Marlow & Sons and Jed Walentas) who run the newly established hotel.

Opening its doors to locals isn’t the only way the hotel has incorporated the community into its framework. Lawrence points out that much of the hotel’s furniture was either made by craftsmen in the neighbourhood or sourced from timbers salvaged from the building’s former life during the renovations. The contents of the liquor bars in each room are all locally produced and even the wallpaper was created by an artist based just a few blocks away. “We’re surrounded by such amazingly talented folks in this neighbourhood that it would be ridiculous to have things done elsewhere,” says Lawrence.

Lawrence is not a newcomer to this business, though his take on it is certainly unique. He began working at five-star hotels in Melbourne at the age of 16, though soon after he began managing what he described as “these horrible big nightclubs”.

“We would open at 7pm and close at 7am, and then send everybody to the afterhours place,” he recalls.

Suffice to say, he needed a change. “I came to New York because I didn’t want to be one of those 45-year-olds who still owns a nightclub, and has to do all the things that you have to do when you own a nightclub. It’s not so much fun.”

Perhaps this is partly what drove his ambition to pursue a new model in the hospitality industry. Indeed, the Wythe boasts not only a 72-room hotel, but also a rooftop bar, underground screening room, a terrific restaurant (Reynards) and an unparalleled appreciation for local production and the heritage of the building itself. The interiors reflect a sense of simplicity, industriousness and subtle adornment. Formerly used for fabric manufacturing, the building now features mostly original brick walls and timbers, with gleaming white tiles and the occasional Victorian flourish. A large glass box sits atop the hotel roof and houses a few suites with 360-degree views of NYC.

The popularity of the bar and restaurant in particular have presented Lawrence with something of a “lovely problem”, as he puts it. “The idea that we have a line of people standing in our lobby is very bizarre,” he smiles. “We’re still trying to figure out how best to manage that.”

Lawrence lived in SoHo when he first moved to New York in the mid-1990s. “Crosby Street is a good bell-weather of how different Manhattan is now. At the time, my then-business partner had a beaten up old Land Cruiser and we would tie a big sheet of plywood and drive around surfing on the back of the truck and no one cared.”

While such antics aren’t as common nowadays, you’ll find that the Wythe has several eccentric elements that you wouldn’t find elsewhere. Two of the hotel suites were converted into “band rooms” for example, outfitted with three bunk beds and a small lounge to accommodate the bands that pass through town on tour (across the street is the popular music venue Brooklyn Bowl). Below the ground floor is the newly installed screening room, accompanied by a small, darkly lit bar, and under the hotel’s courtyard is a private dining room with the original brick vaulted ceiling.

“We’re trying to figure out whether we’ll end up being the place where you come when you have visitors in town and it’s a special place to bring people, or whether we really can just become the place where you go on Thursday afternoon to meet your friends and hang out,” he says. “The latter would be the hope.”