We travel to the USA's pacific northwest to chat to Georgia Frances King; new editor of quarterly independent food and lifestyle magazine, Kinfolk. 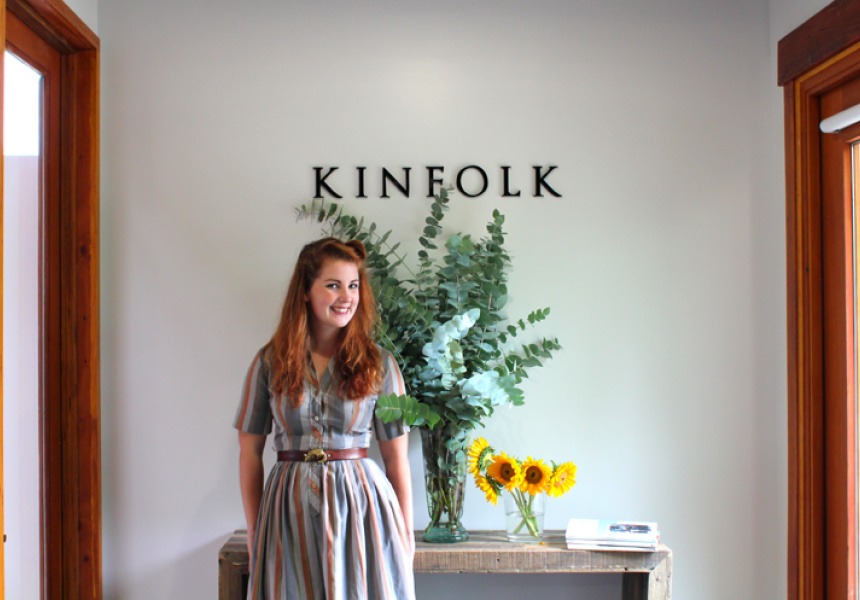 The couple of days that we visit Portland, Oregon to chat to Melbourne-born Georgia Frances King happen to fall on the print deadline for her first issue as editor of Kinfolk magazine, and she answers the door to her house both a little flustered and wrapped in a bath towel. Admittedly, we’re early, though this doesn’t seem to faze her too much. She sits us down on a vintage couch and leaps upstairs to change, chatting excitedly about the fennel and dill frittata she made the day before for us to eat while we talk.

Being questioned doesn’t come naturally to this effervescent and disarmingly ambitious young woman, who at the time of our conversation is just two weeks shy of her 24th birthday. The last two and a half years saw her honing her skills at Frankie in Melbourne as the magazine’s editorial assistant and online editor, interviewing the likes of Beth Ditto, Bon Iver’s Justin Vernon and Amanda Palmer. “Kicking and screaming” but determined to scratch the itch of making it as a freelance writer in New York, Frances King relocated there in March of 2013, or rather to “a crappy apartment in a crappy part of Greenpoint.” After having her work published for a range of magazines including The FADER, Interview and Kinfolk itself, Kinfolk’s co-founder and then-editor, Nathan Williams, convinced her to visit Portland and interview for the job at the helm of the small editorial team. It’s a daunting role, and she’s the first to admit it, though she’s relishing the challenge. Fittingly, her first issue as editor is concerned with the theme of age; and specifically, things that improve as they get older. Considering her tender years, it’s an auspicious place to start.

As you might expect of someone who had their eyes fixed like laser beams on the bright lights of New York, the soft-edged, deeply individual city of Portland never appeared on her radar until her dream job did. “People don’t move here for the weather, clearly,” she says, gesturing to the gusty wind and early autumn rain falling outside the window. “People move here for a way of life, and that’s what’s really nice... In New York you spend so much time just trying to make ends meet and trying to be somebody rather than actually just being yourself.”

It’s impossible to talk about Portland without mentioning the satirical television series Portlandia. The series depicts various artistic types and progressive personalities that make up an ultra-liberal community where public nudity is legal, everyone grows their own vegetables and attending clown school considered a perfectly normal notion. Though the characters in the series are obvious caricatures, there’s an underlying truth – Portland is intrinsically unique. Frances King recalls the second night she’d been living in this city, when a bunch of people riding on bikes attached to each other with fairy lights, wearing tutus and playing flutes passed her in the street. “There were maybe six of them!” she says; keen to point out the wackier side of the city. As of recently, she’s also the first straight member of the Portland Lesbian Girls Choir - which, according to her, is “the most Portland thing you can do.”

The city is surrounded by a beckoning thick blanket of forest, the trees concealing hot springs and hiking trails that traverse rivers and steep mountains. Within these surroundings, it’s no wonder that the people of Portland collectively have a fierce loyalty to and respect for nature. It’s also no surprise that a magazine like Kinfolk sprang up here, positioning itself as a “guide to small gatherings,” a lifestyle and entertaining journal that does away with the exhausting, finicky, Martha Stewart-era style of entertaining, replacing it with something more simple and down to earth. In its wake, Kinfolk’s aesthetic can claim credit for the ripple of similarly clean, natural colours and textures in countless lifestyle publications and blogs around the world.

Just as Portland itself and the perfectionist Martha Stewart style have become typecast and stereotyped, Kinfolk, with its instantly recognisable aesthetic, is in danger of being similarly pigeonholed. However, with the appointment of Frances King as editor, their style and direction is changing. “I think there is confidence in playing to your stereotype at times,” she says, “But also being aware of it enough that you still surprise your readers. We want to show people that we can do more than just beautiful food shots and ridiculously good looking bearded men baking fish in sand pits after getting off their row boat,” she says with a wry smile. “Kinfolk are young and are still finding their feet. I hope I can try to help them put those toes on the ground - as the crazy, redheaded, vintage- wearing Australian girl who’s going to be here for a while... Until I poison everyone with my cooking or something.”