This Melbourne-born artist treks into the Australian desert to find cars transformed by the elements, and then slices them into vivid planes of sculpture. 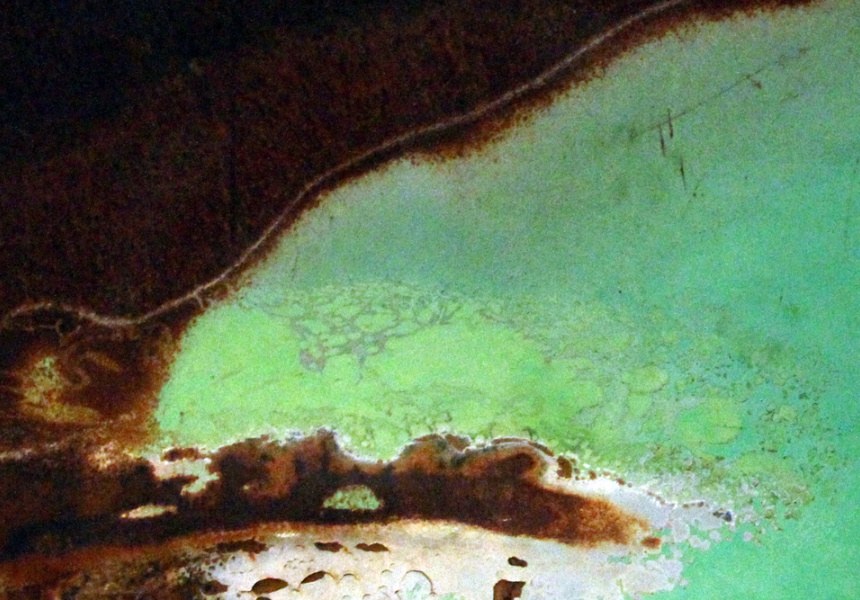 In her time as a field officer for Papunya Tula Artists, a group credited with putting Aboriginal art on the world stage, Saskia Folk travelled thousands of kilometres between isolated indigenous communities in the Northern Territory and Western Australia from her base in Alice Springs.

On these drives Folk passed hundreds of marooned cars – abandoned vehicles stripped bare, corroded and decayed after decades in the harsh conditions of the desert. Similarly discarded cars were stacked high in the junkyards of each far-flung community she visited.

Armed with a hacksaw in 2009, Folk began gathering a collection of panels from these cars. She quickly replaced the saw with a cordless angle grinder – a small but serious piece of metal-slicing machinery – that cuts through steel, “like butter” she says.

Folk’s first collection of these slender sculptures sold out at Scott Livesey Galleries in 2011. Folk is exhibiting her new series, Panel Work, at her home in North Fitzroy this week to coincide with the Melbourne Art Fair. There are 39 new works on display and viewings are by appointment only.

“The desert played a really vital role in preserving the colours and the patterns and different textures” of each panel, Folk says. “There’s very few abstract painters that could even get that kind of effect, and make it look the way it does.”

Folk’s panels are abstract landscapes, with sections of both vivid and faded colour, ravaged by rust or even fire, and riddled with dints and scratches. There are panels with sections of lime green and silvery white; magenta and indigo; and ochre. There’s an eye-grabbing sheet of flecked blue with a spattering of bullet holes.

Folk doesn’t alter the surface of the panels she’s removed but she may jump on or drive over them to flatten them out. In Alice Springs she files the edges of each piece, and scrapes the heavy black tar – used in times past to deaden sound inside a vehicle – from the backs of the panels.

Describing her work, Folk talks about Marcel Duchamp’s theory of ready-mades, in which everyday, mass-produced objects are presented as art. Though cut, cleaned and housed in their white frames, Folk’s car-part-turned-artwork is definitely an extension of this idea. That the panels barely resemble their original state is one of many reasons Folk's works are so intriguing. “You look at the cars we drive now and they’re all white and black and grey. Sure, you’ll get the occasional commodore in some metallic fluoro, but they haven’t got that beautiful richness they used to have,” Folk says. “With 60 years of aging, these cars have softened, and in their day they would have been the most amazing looking things to see drive through the desert.”