Slicing and Splicing with Zoe Croggon

Collage is about tearing things up and destroying other people’s work. But it can also be gentle and beautiful. Installation view of Zoe? Croggon: Tenebrae at the National Gallery of Victoria. Presented as part of the NGV Festival of Photography. Artist Zoe Croggon doesn’t have a TV at home. But since late last year she’s been at the ACMI Mediatheque, in a comfortable little cubicle, watching VHS tapes.

This archive contains approximately 120,000 hours of analogue content, and 1000 hours of digital content. For seven hours a day, seven days a week, Croggon has watched everything from home movies and documentaries on ’70s Australian Sharpie youth gangs, to origami tutorials. She’s taking notes and requesting copies of anything that might sit well in a film she’s making for the NGV.

“I sometimes think I’m too patient,” she says. “I’ll sit and watch anything for hours. I can’t use it all, but the idea is to be open to things.”

Croggon is working on Tenebrae, a new video work for the NGV commissioned as part of the gallery’s Festival of Photography.

You might be familiar with Croggon’s non-filmic work; it has appeared in countless exhibitions in recent years at the NGV, the Centre for Contemporary Photography, Monash University Museum of Art and the Ian Potter Museum, among others. She’s been building acclaim in Australia, and this year alone has three solo exhibitions at the NGV, Gertrude Contemporary and the Mornington Peninsula Regional Gallery.

Her still collages are unlikely juxtapositions of two worlds; for instance, the human body and architecture. With a simple cut into a bit of paper, she brings new life to both.

“The way Stezaker talks about collage has been really informative for me,” she says. “He’s all about reminding people that objects have physical forms, and how they relate to other objects.”

But Croggon’s work is less satirical and more sensuous than Stezaker’s. Her film Tenebrae takes the same approach and applies it to the moving image.

The work is spread across five 55-inch screens. It’s short but complex and hypnotic – gently interacting juxtapositions capture you then let you go: the tip of a bird’s wing, an arm, a torso, rippling water, a marble statue. Transporting collage from two dimensions into the moving image isn’t a big leap – cutting from one thing to another and suggesting a relationship between the two is the most basic principal of film editing.

But as with her still works, Tenebrae is composed entirely from found images. “I never search for a particular kind of image, or a particular shape. It’s chance-based,” she says. “It could be a terrible film, but there might be something beautiful that happens with a gesture.”

Looking through this mass of imagery and refining it to make it look coherent is an exciting but protracted process. When I meet Croggon at ACMI she’s in a state of deep concentration watching a VHS tape called Monuments to Man, a low-budget instructional film about the history of concrete.

I try to ask her questions, but she is repeatedly drawn back into the images. The video is an hour long, and most of it is ropey historic re-enactments of the Romans discovering concrete. So why did she pick this one? “The catalogue is quite detailed,” she says. “There was a note that it had beautiful architectural images in it. Most of this I won’t use, but there’s a couple of minutes that are exquisite.”

When she was younger, Croggon was a dancer and this triggered a fascination in human movement.

She studied drawing at art school, but soon started experimenting with collage. “It was enormously satisfying to find this imagery and then find resolution for it,” she says. She was inspired by the possibility of a dialogue between images.

Croggon still watches a lot of dance. She’s drawn to how the body navigates artificial space, consciously and unconsciously – how our environment dictates our movement. Her work makes that interaction a little more obvious – all she has to do is keep an eye out for the natural crossovers.

“I think collage can be seen as violent and aggressive,” Croggon says. “You’re tearing things up, destroying other people’s work ... Well, that’s part of it. But I think it has the potential to be really gentle. Placing one image on another and allowing collective meanings to happen, without too much intrusion.”

When Monuments to Man finishes the tape dissolves into static and we go through the archaic process of rewinding for the next viewer. Croggon might be the only person in the world to watch this unloved film this year.

“Probably, she says. “Think about the wealth of imagery and footage across the world that’s gathering dust … I salivate at the potential.” She laughs. “My god!”

Tenebrae is showing at the NGV from March 17 until July 30. Croggon also has a show at Gertrude Contemporary, In the Back of My Mind, from March 24 until April 22. 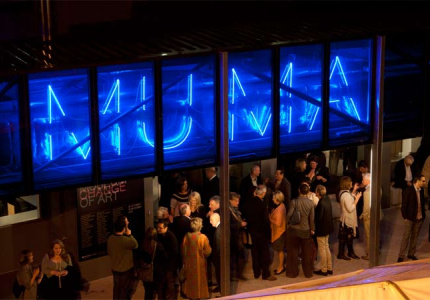