Cutting Into the Past In Ballarat

A heritage building dating back to 1863 has been transformed into a haunting sculptural work about time, loss and history. But you can only catch it for a few more days. 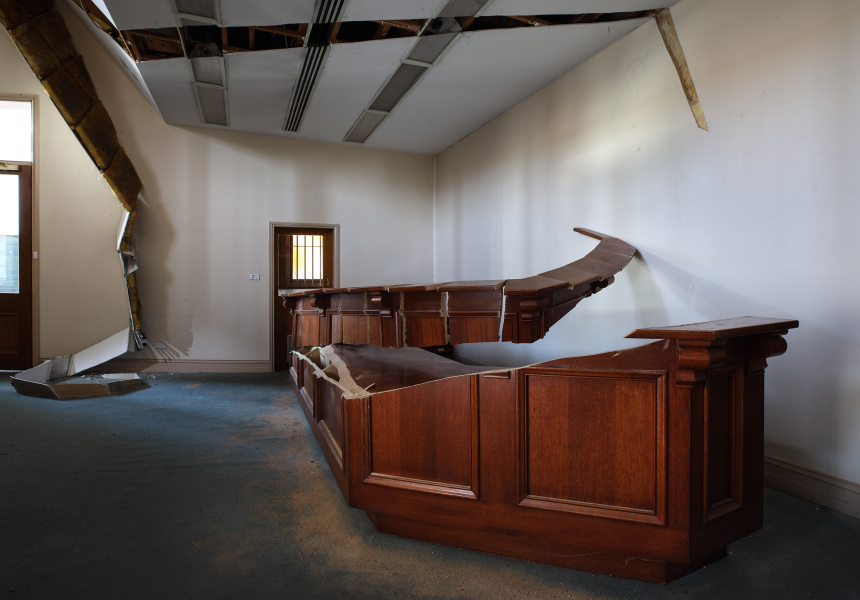 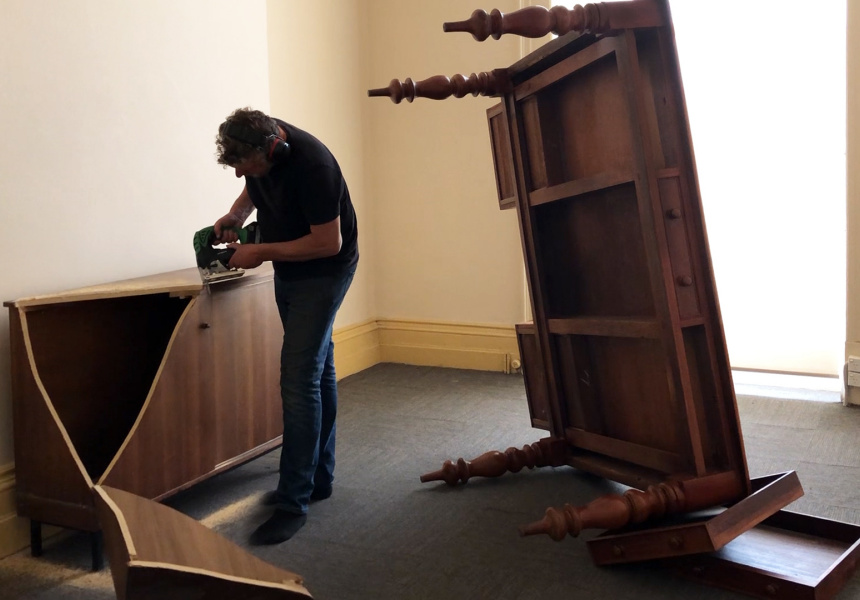 Photography: Courtesy of the artist
1/4
by Will Cox
Share

On Lydiard Street in Ballarat, situated among countless grand gold rush facades, is the old Union Bank building. Inside the empty building, the reception desk is diagonally split open, the top half curling inward like a leaf. Upstairs, some of the ceiling has been pulled down and turned into a sculpture on the floor, and a precisely segmented office wall folds in on itself, cutting the room in half. A filing cabinet has been split down the middle, and lies splayed on the ground.

This is Robbie Rowlands’s Incremental Loss. For two weeks only, the whole building has been transformed by the artist into a site-specific installation, cutting to the core of the building’s long life.

Rowlands has been careful not to damage anything with heritage value, but there’s still plenty left to play with. Through these deep cuts, he asks us to look under the surface, to consider what we value and what we want to keep. The title Incremental Loss is a banking reference, but it also serves as social commentary.

“It’s about loss, about being accountable, about what we lose in our gains,” says Rowlands. “Over time, despite progress, we lose things.”

Vast amounts of gold rush money once flowed through the heritage-listed Union Bank, which was built in 1863. Later, the building was subdivided into a multipurpose office space. There was an accountant in here, and a dentist. More recently, it’s been empty, consigned to history. Soon it’ll become the National Centre for Photography, a new gallery and home to the Ballarat International Foto Biennale.

The history of the building is etched into every corner. A telephone fitting bears the ’80s Telecom logo. I spot some graffiti scratched into a window: “Olive Lees ’86”. That’s not 1986 – it’s 1886. But Rowlands doesn’t want to get into the specifics.

“I’m not going to get in deep on the history, who was the bank manager in what year and stuff like that. It’s not a bank anymore. It's material,” Rowlands says. “It’s all up for grabs. You can consider everything from 60,000 years ago, right up to now if you like. The framework is loosened up.”

It’s a disorienting space. Corridors twist and wind. Staircases of varying widths and safety standards lead to other, narrower staircases. Doors have been blocked off with chipboard, and grand rooms have been subdivided into claustrophobic offices. Windows start at the ceiling and continue into the floor above. The overall design is by no one person, instead it’s been thrown together by simple economics and necessity across decades.

Rowlands cuts through it all in ways that are sometimes obvious, sometimes subtle. There’s a liberating anarchy to it. While he’s showing me around, I stop to admire a patch of beautifully peeling paint on a wall, a layer of present curling into the past. That’s not an artwork, Rowlands tells me – it’s just some peeling paint. But my god, it works.

“Things that aren’t mine become mine,” says Rowlands. “The whole site becomes my work. You can’t tell what I’ve done and what I haven’t.”

Rowlands is a sculptor and photographer; his camera is usually deployed to capture his temporary sculptural installations for posterity. Images of this work will be displayed in the National Centre for Photography when it opens in August. But if you want to see the real thing – and you should – it’s on display right now.