In our new series, Broadsheet takes a look at creative living spaces – buildings that are unusual, historical or even largely unnoticeable – and the people who build their lives within them. This week, we take a peek inside an intriguingly exposed building on Little Lonsdale Street. 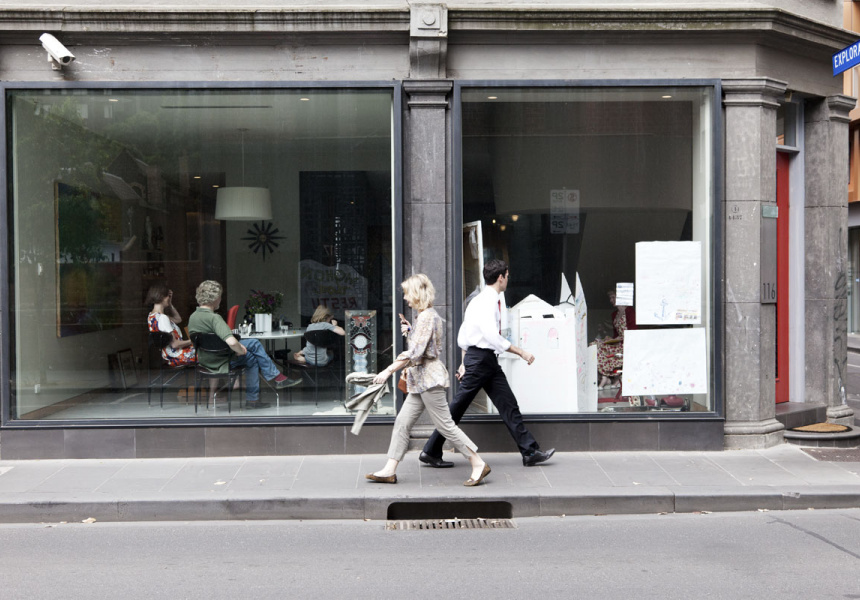 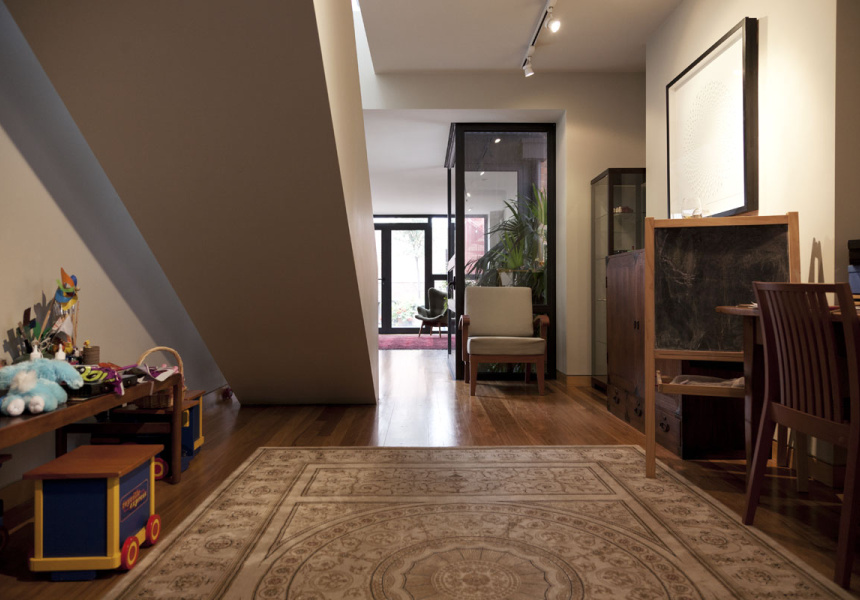 If you've ever walked past League of Honest Coffee, you're bound to have been intrigued (or at least a little perplexed) by this seemingly exposed property, standing opposite the cafe on the corner of Little Lonsdale Street and Exploration Lane.

Much like a shopfront, this four-level home is pressed against the footpath with only a glass window dividing its residents from the streetscape. This is the home of couple Prue Willsford, Michael Kennedy and their young daughter Alice.

The family's dining table faces a constant flow of inner city foot traffic. There are no curtains or blinds, and no attempts to hide. It certainly challenges our conventional perceptions of privacy.

The building has had many lives. It was the premises of the historic Exploration Hotel in the 1860s, a varnish factory in the 1930s and various incarnations of office suites until the 1980s, when it was converted into a residential property. The refurbished facade still remains. As testament to its historical significance, the State Library of Victoria still exhibits an old photograph of the building as part of its Little Lon collection. Back in the 19th century, 116 Little Lonsdale took prime position at the pulse of the Little Lon Red Light District, characterised by slums, poor immigrant populations, factories, cottages and of course prostitution and crime. Quite a difference from the cosmopolitan townhouse we see there today.

Willsford and Kennedy bought the property at auction in 1996, with the intention of using it as a factory for their glass-blowing studio. The decision to live there was more of an unexpected development and simply “made sense” at the time. Back then the CBD was sparse compared to the vibrant community we know today. The closest supermarket was the Woolies (then Safeway) in Carlton, few bars or restaurants existed nearby, and there was a local butcher near Flinders Lane. “Nothing was open on a Monday” says Willsford.

Six years ago, the couple decided to renovate through necessity, when Willsford became pregnant with Alice and they realised they would require another bedroom. This was the catalyst for commissioning John Demos, the architect who redesigned the space, and interior designer Kathy Demos.

In terms of design, significant consideration has been given to the efficient use of space; this is a far cry from the sardine-tin living style that is so common amongst modern CBD apartment complexes. The luxury of free space has provided maximum opportunity for creativity, right through from the ground-level atrium, to the upper-level courtyard and the underground cellar –cleverly lit by skylights aligned to span all four storeys. There's even an indoor 'cage', which acts to separate the bathroom from the living area.

The window-front dining area was never an act of intentional exhibitionism, explains Willsford. Not wanting to lose the light or the streetscape views, and not being able to find a workable solution to the privacy issue, they just “never really got around to putting blinds up”. The family have now grown to love the interaction the windows provide with the world outside. Particularly Alice, who is as brimming with energy and fizz as a caffeinated cola and enjoys nothing more than sitting on the front step and playing her ukulele to passersby.

Touring through the property, any initial concerns regarding privacy dissipate. Given the expansive, private living space available throughout the rest of the house, the exposed front windows begin to seem like a very minor component. It's also a very different sense of exposure compared to the infringement of privacy created by the new high-rise developments surrounding the properties. In fact, it's a little disconcerting to have neighbouring apartments overlooking your bedroom, from just a few meters away.

The only rule of the house? “No pyjamas at the kitchen table”. Of course.