In a new Broadsheet series, we’re getting to know a few creative folk that span a cross-section of inspiring careers and ambitions. The second in our series are husband and wife duo Ben and Brenda Briand – a couple with a yen for collaboration. 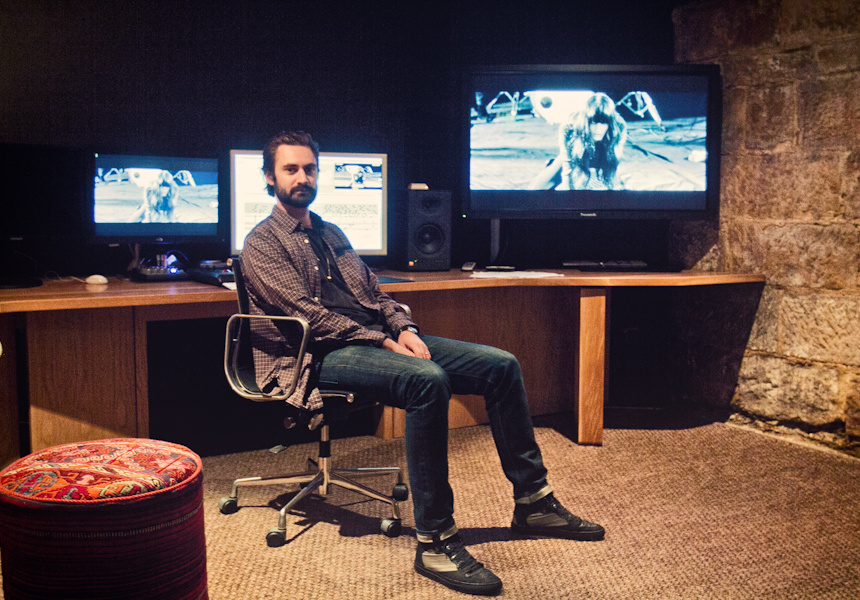 Keeping up with Ben and Brenda Briand can be exhausting stuff, our conversation darting from parenthood to working overseas, running a business and finding the perfect chai. They seem to share an intoxicating ambition where success is well within reach and failure simply doesn’t enter the lexicon.

Recently married and with two-year-old daughter Mila at their side, Ben and Brenda lead the kind of life one easily associates with inner city living – cultured, creative and, let’s face it, hectic. Despite working in different industries (Ben is in film and Brenda in fashion), they often use each other as creative sounding boards and they work together whenever and wherever possible.

Brenda is the creative director for her own high-end accessories brand, Benah. The label was inspired by her nomadic childhood, a time she acquired a skill and passion for collecting things: trinkets, bric-a-brac and all manor of flotsam and jetsam.

Working out of her studio in Chippendale, the New Zealand native manages nearly all aspects of the brand herself, from the muted retro designs of her silk scarves, to conceptualising marketing shoots or managing the busy website. Since launching in 2009, the brand has expanded from scarves-only to include handbags and leather items, cashmere accessories and even shoes. Like many fashion designers, Brenda has witnessed the explosive power of social media firsthand.

“Instagram has become really big in terms of generating sales because it attracts a certain type of audience – the visual person.”

Not surprisingly, Brenda turns to her husband when looking for help with her brand’s campaigns. His evocative short films, such as the excellent Pale Ryder, and photo shoots have helped create a thematic edge to the brand.

While the immediacy of online works well for fashion brands, for directors it can be a slower build, but no less powerful. Ben’s first short film – the award winning, Apricot – has now been watched by more than a million people, thanks to the Vimeo site.

As a director, writer and photographer, Ben has become renowned for the atmospheric and cinematic approach he applies to his commercial work – be it video clips, TV advertisements or branding campaigns. Perhaps it’s his background in fine arts – specifically video art, sculpture and painting – that has helped define his style.

“I find artists like Edward Hopper and Francis Bacon more interesting than a lot of film directors. But in film, I like a lot of the guys who came out of the 70s like David Cronenberg, David Lynch and Terrence Malick.”

At the moment he’s juggling several scripts along with advertising work and a video clip for The Preachers. But it’s that first feature film that beckons. “I was lucky enough to have some success with some short films I made a few years ago which put me in a good position for features. I’ve just started working with a writer from LA, which is really exciting.”

Knowing all too well that it’s “easier to make a first film than a second”, the first feature is not something Ben is gong to rush into, although he’s excited about the idea of solidifying his voice through a feature length film. In fact, he’ll soon go into production for a short that is an extract of his feature idea, something that’s commonplace in America, referred to as “proof of concept”.

“We’re essentially trying to make a really succinct and successful 15-minute film, which will help people understand the tone of the feature.”

Until then it’s finessing the script and making commercials. Says Ben: “The cool thing about commercials is that it’s relationship building, particularly in Australia where it’s very hard to sustain a career just in film.”

The lure of life overseas and a chance to experience more of the “LA machine” is a strong one for the Briands. Brenda has cleverly designed her business so she could essentially transport it with her wherever she went.

For now, there are day-to-day challenges of getting that precious family/work balance just so. They try not to “double screen” at home (looking at two screens like a TV and laptop) and certainly not, as Ben calls it, the “dirty triple”.