The artist behind 2017’s nostalgic milk bar installation invites you into the studio to see him creating new works that examine our relationship to our possessions. 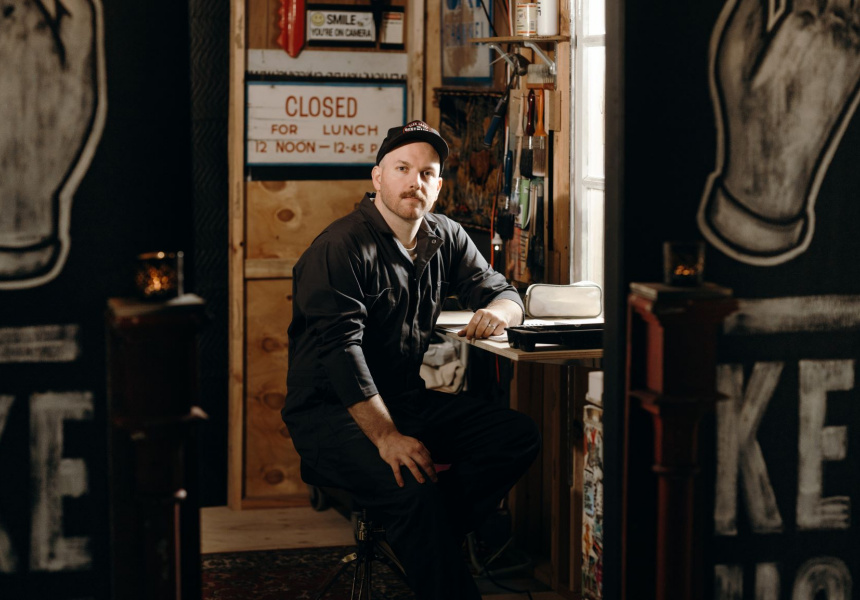 Callum Preston’s art is steeped in memory, nostalgia and the passage of time. Callum Preston’s Milk Bar – his 2017 pop-art installation – reminded audiences of simpler times with hundreds of hand-painted 1996 milk bar staples. He also worked on Rone’s Empire, a haunting and ethereal ode to the collision of nature and humanity that took over the Burnham Beeches mansion in the Dandenong Ranges earlier this year.

Everything Is Borrowed, Preston's latest show, was born from his curiosity about things he found in people’s homes while travelling overseas. The exhibition will feature a series of large-scale paintings of small everyday items on recycled timber.

“The things we collect become a museum about that one person, they tell a story,” Preston tells Broadsheet. “I’m not trying to tell my specific story – I’m telling more of an overview of growing up and ageing.”

Preston is currently working on the pieces for the exhibition in a makeshift studio in the exhibition space, and has collected items from his own home and from op-shops. He is also working from photos of interesting things he’s found on his travels to create paintings he hopes will make people question what their own belongings – especially those that often go uncelebrated – mean to them.

He explains that, in a way, all our possessions are borrowed and that as we age and grow, different objects become important to us before taking on new meanings when we die. Preston says he prizes a box of skateboard magazines given to him by a late friend but “at one point I would have said my Discman was my most prized possession.”

Although the exhibition proper opens in November, visitors can stop by now and watch Preston transform trinkets such as Zippo lighters, cameras and snow globes into works of art.

Callum Preston’s workshop is open now at the KSR Art Bar from 4pm to 11pm Monday to Friday. Everything Is Borrowed runs from November 21 to December 19.