Graphic artist and novelist Pat Grant discusses his slimy new series and the graphic novel as a legitimate form of storytelling. 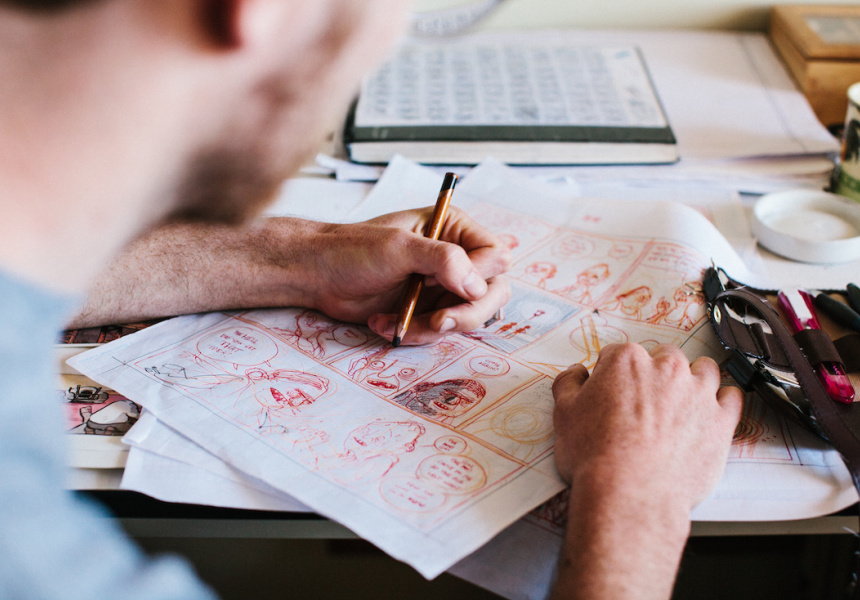 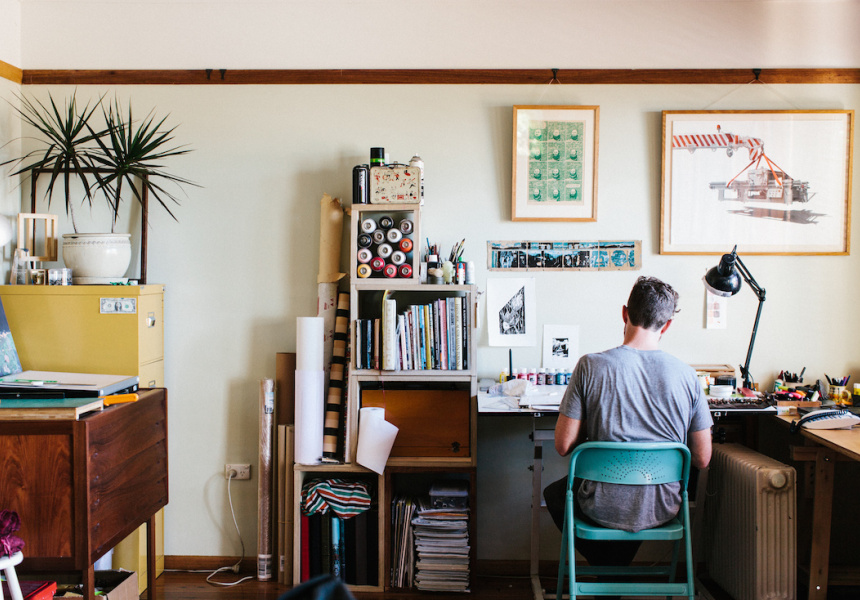 Pat Grant is an illustrator and graphic novelist whose captivating coming-of-age comics depict beautifully complicated settings. He’s best known for Blue, a thinly veiled and visually arresting metaphor for the mistreatment of asylum seekers, A Guard's Story and Toormina Video, a poignant autobiographic comic about Grant’s relationship with his father. The first instalment of Ambient Yeast, a new and much longer project, has been released online.

Grant’s cosy home-studio resides in Austinmere, a picturesque beach town one hour south of Sydney. He splits time between creative projects and teaching for UTS’ Masters of Animation degree. After Blue’s release in 2012, Grant travelled to America for a series of industry conventions where he was inspired to create the Ambient Yeast series. Grant explains that “When you do creative projects, you get heaps of ideas, but some of them you just can’t get rid of. This is one of those.”

Ambient Yeast follows four self-sufficient teenagers in a world that has suffered a total industrial collapse. The two boisterous lads starring in this first release are the spirited sons of dentists, travelling north to a boomtown. There they will encounter a ruthless pair of street-hustling girls. Visually the story is characterised by soft lines, dynamic panels, an earthy-orange palate and generous splashes of watercolour.

Ambient Yeast is Grant’s first extensive undertaking in genre writing. He believes the con-man story is a genre in and of itself, although it can often, “feel like westerns, or film noir because they’re urban, underworld stories.” The confidence man, a modern trickster character, has long held a strong presence in American, African and Caribbean literature. With Ambient Yeast, Grant looks to, “add a layer of interest to this vast mythology that’s been around for a long time.” While Blue was created to address specific political themes (asylum seeking and xenophobia in Australia), Ambient Yeast has been created mainly to explore the characters he’s created.

Grant’s method is painstakingly meticulous. After scripting and storyboarding a project, numerous drafts and total redraws are not uncommon. His philosophy is to avoid using the computer as much as possible, with approximately 10 hours spent on every page, then 15 minutes on minor digital fixes. For his latest work, the process has diverged from prior comics, which have involved digital colouring and extremely dense background detail.

To create the Ambient Yeast universe, Grant uses watercolours to separate visual elements. This is partly a form of self-discipline, as water colours demand much quicker work. In the past, his projects have become obsessions, leading to 12 hours spent in the studio, six days a week. For Ambient Yeast, however, he says, “The challenge is to find a way to get it done without putting my life on hold. To weave the practice into my life.” Grant’s methodical practice is just one example of illustration that can engage with mature forms of storytelling.

Comics are often assumed to be a medium for adolescents, full of super heroes. But with vast potential for powerful visual storytelling, you can sympathise with Grant’s frustration with that assumption. Members of his intended audience (“an adult who’s interested in literature”), regularly purchase his book, only to explain it’s for their eight year old. “It hasn’t crossed people’s minds that there might be a comic book for them,” he says. “That really upsets me.”

Grant believes the disengagement of mainstream literary audiences with comics is a result of, “generations of people who stopped reading comics at the age of 12, and who don’t have the visual literacy to actually get in.” But Grant remains hopeful. “The only thing I can do about it is to make more stuff for them.”

There remains scant detail about a time line for upcoming Ambient Yeast releases, and the final form remains unknown. It could be distributed independently as a self-printed zine, released in small comic-book issues or as a hard-back anthology for mainstream bookstores. Regardless, this warrants reading in its intended material form, for maximum slime and yeastiness.

The First Instalment of Ambient Yeast can be seen here: patgrantart.com