The Colour and the Shape: Esther Stewart at Utopian Slumps

Young artist Esther Stewart hopes viewers will recognise patterns of language and thought both within and between her distinctive geometric paintings. 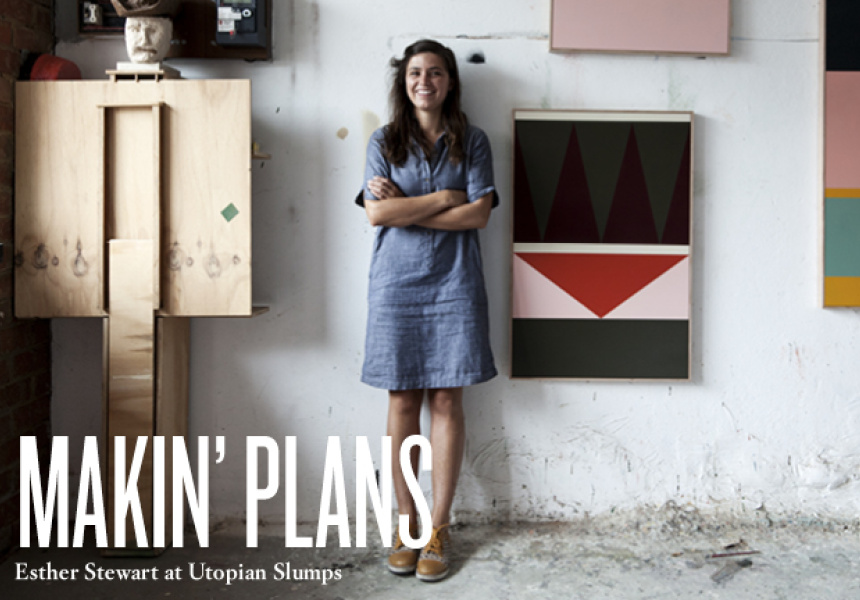 Esther Stewart shares her studio with her boyfriend Oscar Perry, also an artist. Depending on which of them is preparing for an exhibition, they each move between the lighter, open front of the studio and its more cluttered recesses. Esther’s Makin’ Plans is about to open at Utopian Slumps and her paint cans are lined up along her workspace like little tin soldiers.

“It’s more about the composition, not the palette, that binds them together,” she says of her new works. “You can’t remove what you’ve already done. You can subtract its colour but not its form, which for me is really interesting.” Stewart begins with a pencil and a ruler on wooden board, before she tapes off sections, which are latter filled in with enamel aerosol paint. “It was definitely the case for [Foldout, the artist’s site-specific work of last year]…essentially you start with a triangle and then once that colour’s done, well, intuitively, what feels good next? Whereas with Makin’ Plans you can see there’re ones that are clearly planned from the beginning, like this one here,” she says, gesturing to a right-angled oblong composition of blues with a dark horizontal stripe across the lower section of the board. “It works because it’s been planned from the beginning. It’s nice to have complex colours together that change the way they come forward or back. It’s good to think, ‘What would I naturally put here, what feels easy?’ Then go with something else.”

This kind of audacity can result in either feathers in the cap or black eyes. “Once the paint’s down, there’s a seam – you can’t change that shape because of the lining,” explains Stewart, “and that’s why some end up in the dog heap.” She points to a large board at the back of the studio, which features a broad diamond shape split down the middle. “Formally that just doesn’t work, and that’s been a million different colours. It’s good to try and keep trying with it, but also have the confidence to abandon it – to be able to decide after a while, actually, it’s not the colours, it’s the composition. There’s nothing you can do about this painting,” she laughs.

The sense that the works belong as a group is core to tis new series. “I had an idea I didn’t want it to be a sparse show,” says Stewart. “My original thinking was that I wanted it to feel bolder and more ambitious than just a couple of works to reflect on. I wanted it to be very, very close to your body, and packed and kind of an overload.

“Obviously they’re individual works within themselves, but it’s quite important that they’re part of a language. And once they go together you can see different patterns emerging, or syntaxes.”

It’s the first time Stewart has had the time and “insight into the process” to be fussy and put together a consistent string of works of commensurate quality. “When they’re all out and together, it feels really strong,” she says.

There are other aspects to Stewart’s practice. A collection of oddly shaped ceramics lines the front windowsill of the space. One looks like a warped accordion and one like an angled river stone. Stewart worked with ceramicist Roberta Gartland over a five-month period to produce these little miracles, which look solid but are actually hollow and incredibly light. “She’s a wizard, she’s incredible,” Stewart says of Gartland. “I think both of us were a little overwhelmed. It’s really complex, [the moulds have] to be perfectly engineered. I’m very immediate, so for me the process has been quite difficult.”

Stewart planned to exhibit the sculptures within Makin’ Plans, but now she’s looking at them as inspiration for her next pieces. “Maybe what’s interesting about them is that the scale could change. For me they’ve created a lot of ideas.” Her willingness to take time to contemplate and her refusal to be afraid of not knowing what something she’s created might mean to her wider practice is brave for an artist so young. Whatever happens next for Stewart, there’ll be plenty of risk as well as forethought.

Makin’ Plans opens at Utopian Slumps on Saturday May 4.