Christian Thompson took Australian art practice out into the world. A new exhibition brings it all back home. 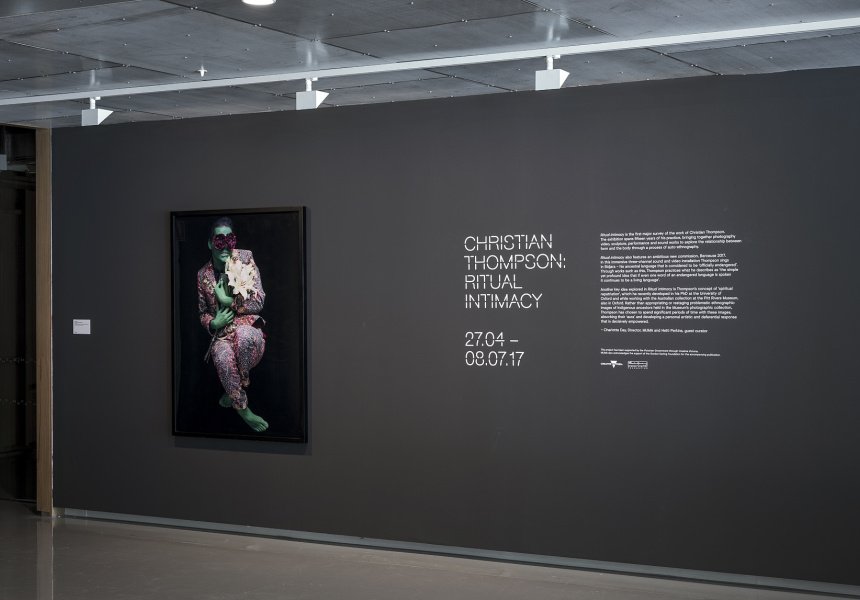 When you’re looking at the art of Christian Thompson, he’s looking right back at you. You’ll leave new survey, Ritual Intimacy, with his eyes – smouldering, intense, impassioned – burnt into yours. But they aren’t self-portraits. “I’m a convenient vehicle to express my ideas,” says Thompson. “I don’t think of them as myself. I think of myself as a kind of armature that I layer the work on top of.”

Ritual Intimacy demonstrates the versatility of that frame over the course of a decade, demonstrating why he’s one of the most talked-about of Australian artists. A Bidjara man, from what’s now Central Queensland, Thompson is the custodian of a long tradition. But the stories he tells are contemporary, using pop music, cinema and photography to heighten the traditional and skew safe interpretations. Thompson wears sculptural clothing in photographs that take cues from fashion photography, from garish pink hoodies and crowns, to headwear made from kangaroo paw and banksia that obscure his face. His work talks to Australia’s colonialist topsoil, and the indigenous roots beneath it.

Take the ominous three-channel video piece Berceuse, in which Thompson sings us a lullaby in Bidjara language. Or Refuge, in which Thompson sings a pop-ified rendition of his earlier piece Dhagunyilango (brother), accompanied by piano. Nearby, sound pieces like Decent Extremist, made from Bidjara words manipulated to sound like bee swarms, emanate from clear dishes above your head.

“I’m interested in simple aesthetic gestures that can say something— ” (he pauses, trying to avoid sounding pompous, and instead settles on a self-effacing, mock-pompous voice) “—something quite profound about the world that we live in. I tend to build images how I create a sculpture. I borrow from the world around me.”

To this end, Thompson doesn’t want to speak to Australia alone. Part of the potency with which Thompson reflects his homeland is drawn from his prolonged absence. Since 2010, the artist has been living in London, Oxford and Amsterdam. Ritual Intimacy emphasises work created outside Australia. Each of these places has had a profound impact on him, particularly Oxford, where he was part of a cohort of the first Indigenous Australians to be admitted to one of the most prestigious universities in the world.

And join ‘em he did, exhibiting in the dining hall at Oxford’s Trinity College – pulling down the dusty oil portraits of college alumni for the first time in 450 years and replacing them with his own. You can’t get further into the heart of the colonial empire than that.

Ritual Intimacy is an opportunity to see the highlights of a decade of his practice in one place, to watch his imagination spread across the world while keeping an Australian voice. There’s a lot to be said for the beauty of distance. It’s easier to talk about home when you’re away.

“You’re able to remove yourself from the local discourse, and romanticise home. When you’re displaced you tend to gravitate towards certain memories,” says Thompson. “But this is who I am. It would be weird not to express that somehow. I combine memories of my past with my lived experience and an idea of where I’d like to be … it’s all montaged into one.”

Christian Thompson’s Ritual Intimacy is at Monash University Museum of Art until July 8.