Capturing the Marks that Make Monuments

While taking architectural photographs, Christian Pearson’s eye wandered towards the marks left behind in the process of construction. His new exhibition uncovers the beauty of these stepping-stones to form. 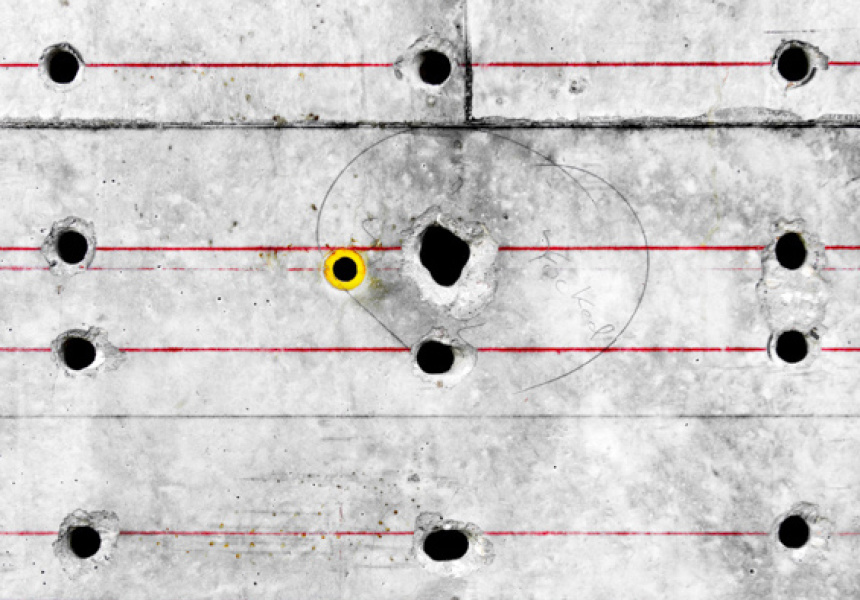 Detail from: The Drill is Kept Cool

A quick flip through Christian Pearson’s commercial photography portfolio reveals architecture as it’s intended to be seen: all sharp, carefully calculated lines and precise, sloping curves; meticulously ordered arrangements of steel, glass and concrete. For Industrial Graffiti, his new solo exhibition at Edmund Pearce Gallery, Pearson is peering past this facade. Underneath these immaculate structures, he’s found the rough and imprecise marks left behind by builders, technicians and engineers during the construction process.

The project started off almost as a distraction, idle wonderings had while making his commercial photography. But Pearson didn’t necessarily see it as being in opposition to the tasks at hand.

“I find if I don't have a personal project on the go my commercial work suffers and I get bogged down in repetitive compositions,” he explains. “I think all commercial photographers like to meet the brief set out by a client but, by the same token, I think in order to keep stimulated and keep your eye active it is best practice to not only meet the brief but also to explore other ways a job can be interpreted.”

Commercial photography has also helped his art practice by giving Pearson access to places, people and locations he wouldn’t otherwise have had. In the case of Industrial Graffiti, Pearson’s wandering eye ended up in industrial building sites, railway lines, sewer tunnels, freeways and bridges – and in front of a host of incidental marks.

Some of the marks are examples of communication; seemingly arcane, near indecipherable combinations of letters, numbers and shapes left behind by builders for other builders. Other marks are the byproducts of processes: in The drill is kept cool, a cooling fluid leaves behind a vivid splash on the wall, while glue forms a chaotic latticework of dripping lines on a freeway wall in The glue that binds.

Upsetting the scale is Primed for development, which shows a former industrial plant prepped for transformation into a housing development, shot from a helicopter 300 metres off the ground. Whether small, spray-painted scribbles or massive machine-made scars on the landscape, these residual impressions all share a similarly anarchic and carefree aesthetic, however unintentional. And all are in the end only provisional, meant to serve a specific purpose before disappearing altogether.

“I feel there is an inherent beauty to fleeting moments that have no sense or objective towards an aesthetic,” Pearson explains. “I also think some of the beauty comes from the idea that these marks had no intention to be aesthetic. There is a part of me that finds them beautiful because they were never meant to be and have no reason to be objects of beauty.”

Most of the marks are now hidden, covered by rocks, bitumen or concrete or otherwise built over and on top of. For all his love of the fleeting, Pearson still seems to harbour at least some nostalgia for these purposeful but ultimately irrelevant and invisible marks.

“I like to think in some respects they all still exist.”