Breathing Life into the Beast

Less than a week before opening night, we spent an afternoon on the buzzing set of King Kong, an ambitious production more than five years in the making. 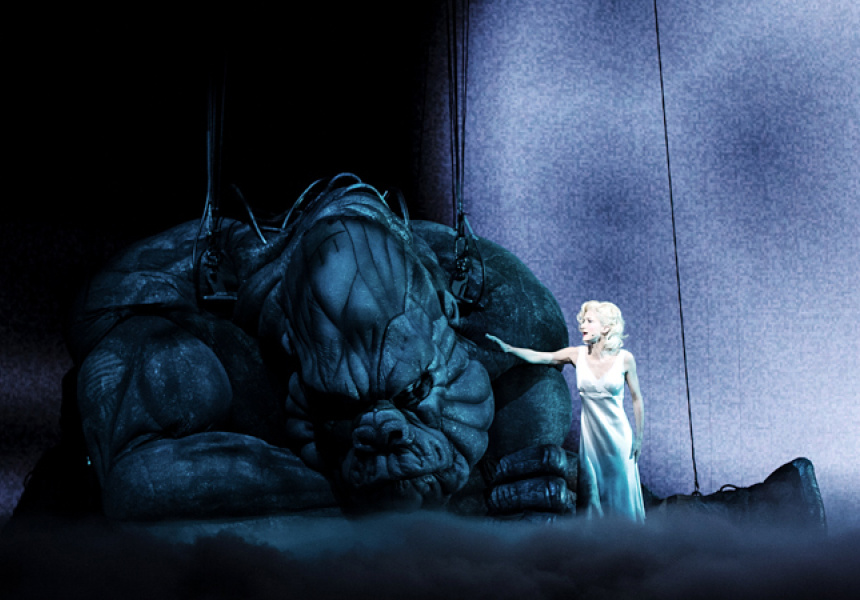 At 2pm on a Tuesday afternoon in Melbourne, across from the florist in Flinders Lane, the cast and crew of King Kong filter quickly through the stage door at The Regent Theatre. It's a nondescript doorway, painted black and set back from the footpath.

When standing on the street, they barely rouse the imagination, but inside, the world's most elaborate theatre ensemble – complete with almost 150 cast and crew, puppeteers, circus performers, actors, robotic engineers, set designers and musicians – is running through one of the final technical rehearsals for King Kong.

It seems curious: in just a few weeks the public will focus its collective gaze on the towering, 6.5-metre tall, 1.2-tonne, animatronic King Kong for the first time, but the main hall at The Regent feels more like a monastery than a performance space.

Based on Merian C. Cooper's character from the 1933 film, the King Kong stage show bears all the hallmarks of any great King Kong adaptation: the obelisk atop the Empire State building, exotic animals from Skull Island and a beautiful blonde in flowing white threads (Ann Darrow, in this case played by Esther Hannaford). But aside from these essentials, it's very much an original production and a very Melbourne one at that.

Kong himself was devised, built and debugged in Melbourne and many of the show’s stars were picked from the Victorian College of the Arts and Prahran’s National Institute of Circus Arts. For perhaps the first time, Melbourne – not Broadway or the West End – is at the forefront of global theatre. Along with leading lady Hannaford, much of the supporting cast – including Adam Lyon (playing Carl Denham) and Chris Ryan (playing Jack Driscoll) – have been trained in Melbourne and spent much of their careers performing in Australian theatre. The soundtrack also features music from local heroes The Avalanches, along with contributions from international talent like Massive Attack and Justice.

Kong is the brainchild of Global Creatures, a production company based in West Melbourne that broke ground with their production of Walking With Dinosaurs, in 2007. The arena spectacular features life-sized, robotic dinosaurs that utilise Global Creatures’ own animatronics robot technology. More than seven million people across four continents have seen it since 2007 and its success has spawned several other arena spectaculars, including the 2012 adaptation of Dream Works Studios’ How to Train Your Dragon.

By 2.15pm Kong is onstage, perched on top of the Empire State building ready to grip the show's star in his fingertips. He is surrounded by technical directors and more than 10 puppeteers – known as ‘King’s Men’ – who are responsible for bringing the robot’s arms and body movements to life. The show’s director, Daniel Kramer, is at the side of the stage talking to Hannaford and when he calls action, the theatre comes to life in a sort of gentle symbiosis.

“It’s a hybrid beast,” explains Kong’s chief designer Sonny Tilders. ”So when I say it’s a string puppet, it’s also much more than that…there’s three layers, if you like: there’s a big automation system which does all of the gross moves, then there’s the King’s Men who are directly manipulating the puppet and pulling strings and then you’ve got this other layer, which is the facial expressions, the cylinders and actuators on board the puppet which move the waist and the shoulders and the wrists.”

Walking through The Regent Theatre, the colossal scale of the production is apparent immediately. Almost every space in the building has been converted to fit the crew, who’ve set up tables in the foyer to sew the costumes, turned the upstairs cloisters into rehearsal spaces and built a makeshift orchestra pit three stories above the stage. Thirty tonnes of steel was brought in to reinforce the stage to support Kong’s sheer size and weight, replacing both the stage front and the orchestra pit.

Bemused at the continued calm on set, I remember something that Tilders told me earlier in the day. When a theatre production is organised, there’s almost no need for communication between the crew. In Kong’s grand entrance on opening night, the voodoo captain will call subtle puppetry moves, drive the puppet’s shoulders and wrists and hands and guide the King’s Men via radio, all in a single moment. “You find that when it is working well, there is almost radio silence,” he said. “It is very calm – there are a few cues here and there and the rest is just muscle memory.”