The Body Worlds exhibition is an anatomy lesson with real human corpses. It teaches us a little about our organs, and a lot about our mortality. 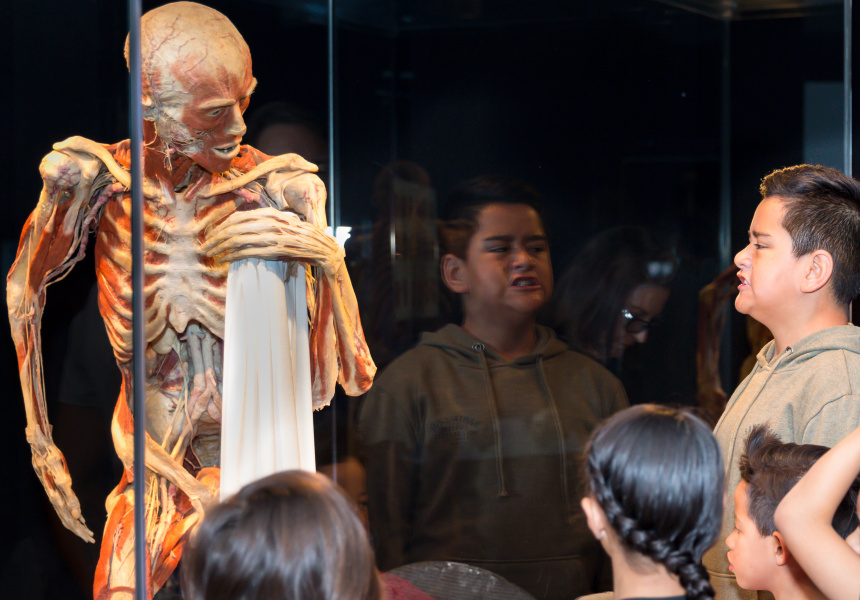 Photography: Courtesy of Body Worlds
1/10
by Will Cox
Share

In a dark little corridor at Melbourne Showgrounds, I watch a short film introduction to Body Worlds: Vital, the Australian debut of a long-running touring exhibition about the human anatomy.

“The more time we save, the less time we seem to have,” says a soothing American voice over cartoons of daily life. “We sacrifice our friends, families and sleep … our bodies react. They buckle from the weight of choices. We eat too much, too little, or without a care. Hearts race, blood thickens, cancers loom, minds melt.

“One thing cannot be accelerated: our body. It has its own nature, its own needs and rhythm.”

The film falls well short of preparing me for what I’m about to see: the flayed, preserved remains of 18 deceased people, and 150 specimens.

Body Worlds is an educational experience; it’s a novel anatomy lesson, and it’ll enlighten you about your resilience to gore and mortality.

My guide is Dr Angelina Whalley, who has curated the Body Worlds exhibition since its inception in 1995. The preservation is the work of her husband, Dr Gunther von Hagens, who developed the process of plastination (a preservation technique where water is replaced with a silicon-like polymer) in 1977, and in 1993 founded the Institute for Plastination in Heidelberg, Germany.

Once plastinated, the specimens are dry and durable, and they’ll hold for the next few hundred years. Maybe even longer.

The exhibition starts with a skeleton – the least confronting part of our internal makeup.

“The vast majority of visitors are laypeople, and they may have never seen a corpse,” says Whalley. “So I typically start with something familiar.”

It doesn’t take long to get to the confronting stuff, and it’s not what I expected. There’s a skeleton on its knees, teeth bared, glaring through eyeballs (which are unsettlingly still attached) and holding up a heart, as if begging.

When Body Worlds launched two decades ago, the specimens were displayed upright, stiff. Over the years Whalley has made the exhibition more engaging.

“We want to go beyond the scientific,” she says. “So we’ve looked back to renaissance artists. Those anatomical pictures were always dramatically posed.”

As we get deeper into the exhibition we see more deeply into ourselves and how our lifestyles affect our bodies.

I stop at a regular knee joint with the cartilage showing. It’s next to another in advanced stages of arthritis; worn and rough. A knee replacement – a metal hinge among taut flesh – is bigger and more obtrusive than I imagined it would be. It looks like a component for a bike.

Sliced livers show the effects of alcohol abuse. A cross-section of an obese person’s organs shows them padded with fat. A lung riddled with cancer is dense and cream coloured. An amputated leg is from a man who is still alive, out there somewhere.

“My goal is to allow visitors an entire glimpse into the body’s interior,” says Whalley. “Many of our visitors are suffering from the kinds of conditions we have on display.”

One glass case contains two separate lungs; one clean, and one blackened by years of smoking 20 a day. A passerby overhears Whalley explaining it to me and interjects. “My mum smokes 50 a day,” she says. “She’s going to look like that.”

Whalley is, naturally, very matter-of-fact about all of this. She’s a physician, and she’s been looking at corpses for four decades. But she still remembers the first time vividly.

It was 1979, and Whalley was working in the forensic department of a hospital. It was an office job, but she was fascinated by anatomy. She watched a physician take blood from an exhumed corpse, which he did by cutting into a big artery on the thigh, letting blood flow freely. Then he packed the open wound with paper towel to stop the bleeding, and stitched it back up with a huge needle, “the sort my uncle used to use to upholster couches,” says Whalley.

“The more often you look at it, it gets normal,” she shrugs. “At the same time it makes me aware of life being a treasure. It’s an opportunity we have, and I try to live as healthily as I can. Many people we’ve surveyed six months after seeing the exhibition have quit smoking, or exercised more, or eaten healthier.”

As educational as it is, I never get over how macabre it is to see these bodies set out in dancers’ poses. One does the splits, athletically holding his own cluster of internal organs over his head. You can see the cavity in his back where they’ve been removed.

Another presents us, arms outstretched, with a huge, fleshy sack: our largest organ, our skin. “Take it,” he seems to be saying to me. “I’m finished with it.”

At the exit there’s a large whiteboard with the header “Before I die, I want to … ” Below are the comments of visitors reflecting on their weak, complex bodies, and the choices that impact them.

“Take every day as it comes.”

“We are our bodies,” says Whalley. “But we don’t think about them unless they’re not functioning properly. If you look at how intricate they are, it makes a difference.”

Body Worlds: Vital is at Melbourne Showgrounds until November 18.