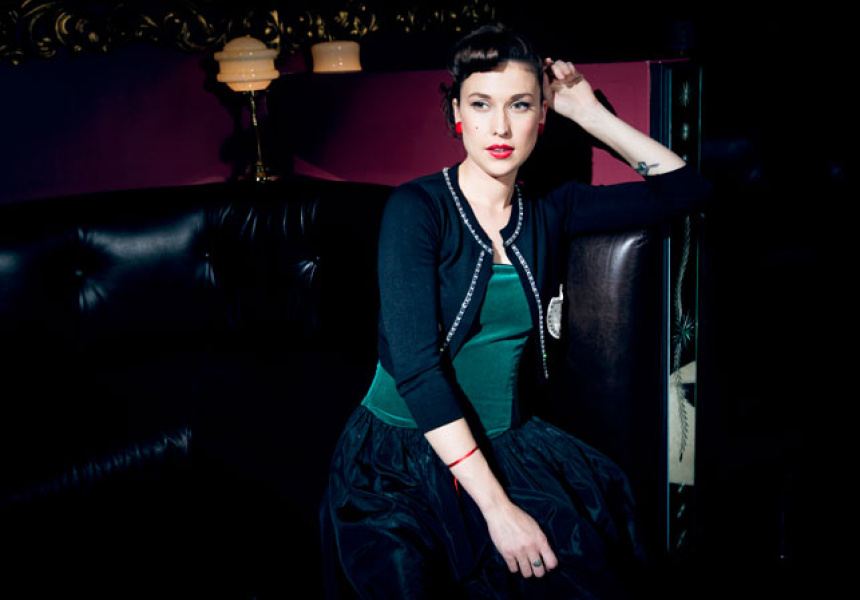 Sporting her now trademark Resistol cowboy hat that she purchased from a recent trip to Nashville, Sydney-based artist Lanie Lane cuts a radiating figure over coffee at an Albert Park cafe. With racy red rose lipstick and dark shades, it all demands an instant track cueing of Roxette’s The Look.

We discover quickly that the horse is Lane’s power animal. Themes pertaining to these wondrous mammals – as well as cowboys – stream through the florist-turned-musician’s aptly titled debut record, To The Horses, and are inked across her skin.

Two of her most recent equine-related tattoos appear in full view on the inside of either arm. On her left there’s a horse she has named ‘Fierce’ and on her right, a horseshoe. “I feel like maybe I was a cowboy in a past life and it’s all coming back or something,” she laughs.

From riding horses on Malibu ranches in California during breaks from shooting film clips, to touring with Justin Townes Earle and recording a 7” with Jack White of The White Stripes in Nashville, Lane has had quite the year.

With To The Horses tapping into the wider 50s and 60s rockabilly, rock‘n’roll and R&B lineage that spawned the likes of Elvis Presley, Wanda Jackson to Janis Martin, Lane opens her record with a cover of the latter mentioned singer’s seminal tune, Bang Bang.

But Lane is adamant her record aboids strict homage to the era. In fact, the 25-year-old artist’s knowledge of the rockabilly genre was actually quite limited, so it seems that Lane is far from a pastiche queen.

“I sculpted these songs individually and they blended really well,” she explains. “I really was not raised on any rockabilly, so this is something new and exciting for me too.”

As it turns out, Lane grew up listening to her father finger-picking his guitar in a way closer to the folk tradition, and explains that the sound of her early gigs as a 16-year-old were of the indie-influenced grunge persuasion. She then moved onto “weird and complicated jazz”.

While Lane can’t exactly understand how all these deep country and roots-related urgings have found their way into her current playing style, she’s pleased they did, however unconsciously.

Plenty of artists have appreciated the fact that they were in the presence of emerging greatness. Jez Mead, Tim Rogers, Ash Naylor, Dave Williams and Steve Hadley are all still buzzing after their contributions to Lane’s debut record.

The four-piece unites to blend a rare sound that recalls jazzy blues, spaghetti western and 50s swing. “Zoe can play funk music and ukulele solos on the double bass and Paul is like a god on drums, while Aidan is so self-deprecating, he’s like a kindred spirit,” Lane beams. “I can’t tell you how much I love my band!”

Lanie Lane has just been announced as part of the Golden Plains bill for next March on top of her Queenscliff, Southbound and Falls Festival slots. She’s also a major player in the Nick Cave Tribute in November. Catch this ‘shot in the arm’ artist when she next rides into town. You’ll be sure glad you made her acquaintance and all.

Lanie Lane’s album To The Horses is out now through Ivy League. Catch Lanie at the Northcote Social Club tonight. For full touring details check the website.