While The Ramones and The Sex Pistols were carving up the world, Terri Hooley was single-handedly nurturing Belfast's punk scene. A new movie tells his story, and we hear it from the superstar-DJ-turned-soundtrack-artist who produced the film, David Holmes. 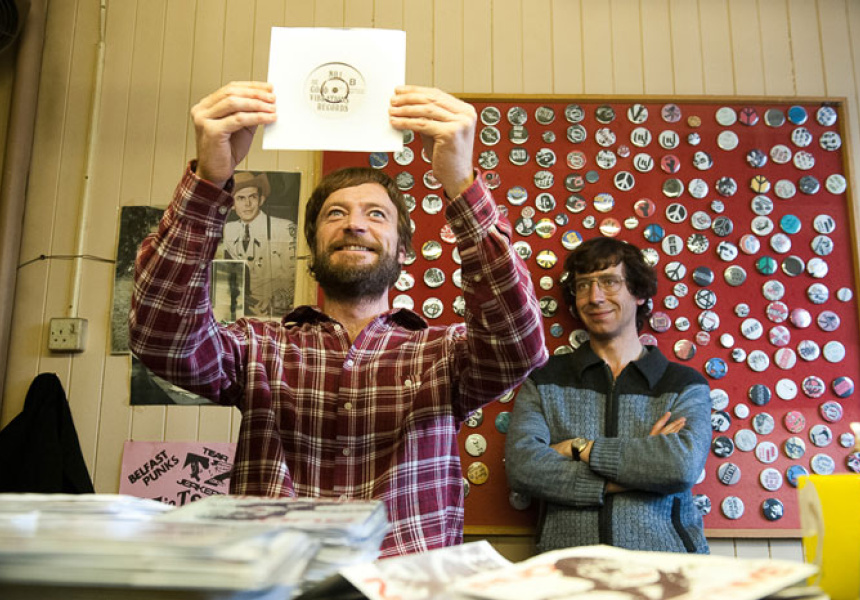 Good Vibrations isn't your average punk-rock story. But then, Belfast isn't an average city. When punk was emerging there, its residents were more accustomed to the sound of bomb blasts than frenzied guitar riffs. But as Catholics and Protestants battled to control the city's streets during The Troubles, Terri Hooley stuck a finger up at both sides and opened a staunchly neutral record store/label.

The film illuminates his life and work, with Game of Thrones' Lord Beric (Richard Dormer) in the starring role. With the other cast and crew he brings a genuine warmth to the film. Which is to be expected – it's a true story recreated by people who knew Hooley well. Producer David Holmes is one such person. Though he's scored big-budget movies such as Ocean's Eleven, the DJ/musician counts producing Good Vibrations among his proudest moments. He tells us why.

David Holmes: Belfast is a very strange place. We have this thing happening here at the minute. There was this crazy Presbyterian pastor, James McConnell, who made a statement in his church condemning Muslims and saying they're the spawn of evil. And then our first minister, Peter Robinson – in theory, the prime minister of Northern Ireland – backed him up and said, “He's a good man, I trust in what he says.” Later, two Pakistani men were attacked in their homes by thugs. Certain people in Northern Ireland – if they're not fighting with each other, they'll find someone else to fight with. Terri ruffled feathers because he stood and he shouted from the rooftops: you're all scumbags and gangsters.

The movie is about a record store, Good Vibrations, which he opened on the most bombed and murderous mile in Belfast. Through this he discovered, by accident, punk rock. So it's just about that struggle through those times, trying to make records, trying to get them heard, when no A&R person would come to Belfast because they were too frightened. And rightly so; all you had to do was turn on the BBC news and you'd see there was a civil war going on in the streets. It was a lottery. You could go out one night and never come home, just by going up the wrong street or drinking in the wrong pub.

You have to understand what Belfast was like to realise that what he did was quite extraordinary. It's like Disneyland compared to what it was. In saying that, when you grow up as a child – really the only thing you need is love, a roof over your head and food on the table. There was plenty of that in Belfast. So I wouldn't be the first Belfast man to say growing up during The Troubles was actually a really exciting time. I mean, it was. I loved growing up here. I had a great network of friends. You were never too far away from trouble, but that's what I knew, that's what we all knew, that's what we grew up in. So it was kind of like water off a duck's back, you know?

The beautiful thing for me about Good Vibrations is, apart from the great Bruno Charlesworth (also a producer on the film), every single key player in the film is from Belfast. The writers, the directors, the lead actor, myself. We're all from Belfast and we were all friends. So the writers knew the directors had a young company set up to make films. And they sent in a two-page treatment that just outlined the film. Glenn Leyburn, who was one of the directors, called me and said, “Come round, I want to show you something.” I got round to his house, I read the two-page treatment, and I was like, “Oh my God, this is genius.”

I'd been buying records in Terri's shop since I was 11, maybe a bit younger, actually, but as far back as I can remember. He was always a very generous guy, he gave me more records than I bought, and he was just always this central hub for alternative music. When the idea came along, it was like, “We have to do this.” By hook or by crook, and sheer will and little bit of luck, we found the money to make the film. It's still one of my proudest ever moments, because I did it with my friends. I wasn't just drafted in from London or wherever. This was a sheer labour of love from the moment I read the treatment.

Good Vibrations is now open at selected cinemas across Melbourne.