At least one artwork at the NGV will be on this earth long after you. In partnership with Mercedes-Benz, the principal partner of the NGV Triennial, we talk to the man who commissioned it about how that’s a problem. 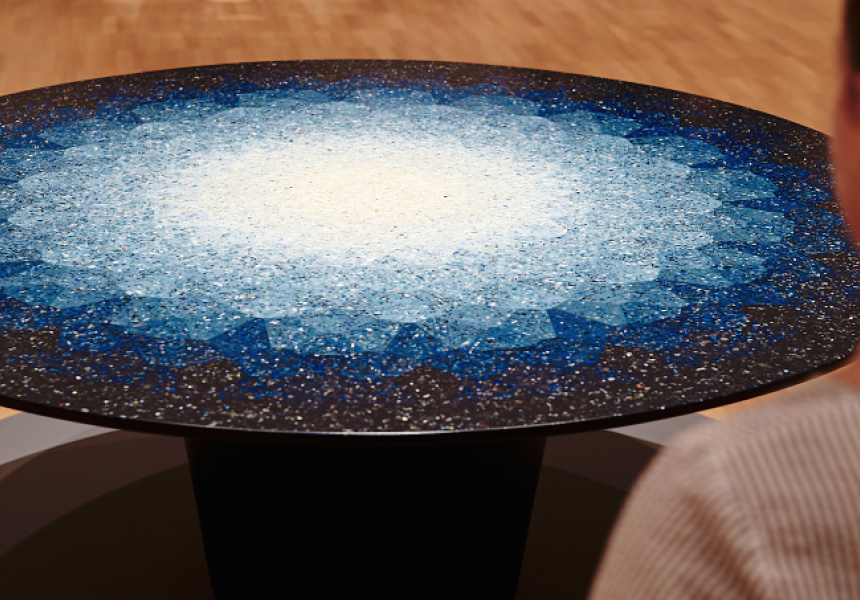 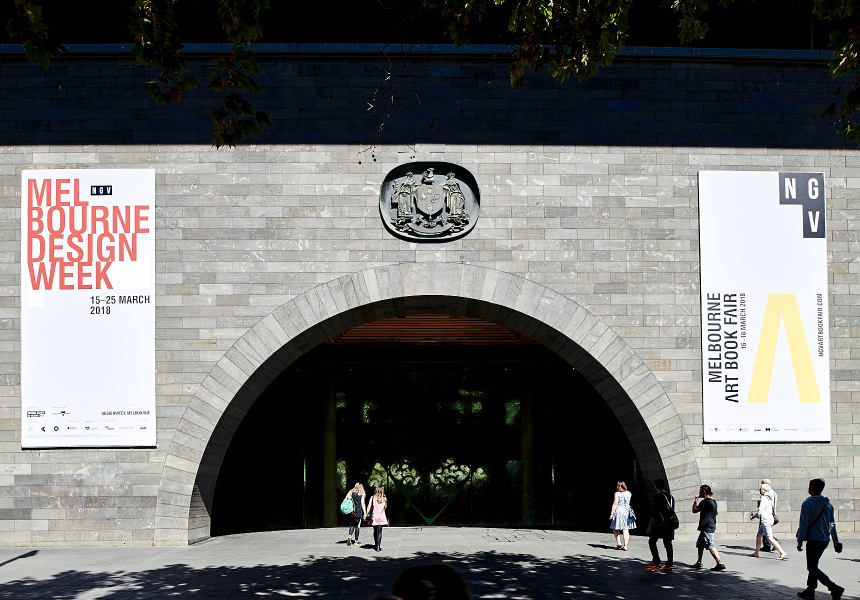 In a room at the NGV Triennial is a sleek terrazzo table surrounded by ocean-inspired paintings from old masters. Called Gyro, the table is dark and beautiful in isolation. But its link to the surrounding artworks of ships on roiling seas and vast watery vistas isn’t immediately clear. It’s only when its materials are understood that a secondary meaning emerges.

The work’s title holds a clue. “Gyres” are vast circulating ocean currents that circulate plastic waste around the world with remarkable efficiency. Humans produce nearly 300 million tonnes of plastic each year, and around eight million tonnes of that ends up in the ocean. This waste causes untold damage to the ocean’s ecosystems. Just a fraction of it washes up on beaches. But it was this waste that caught the eye of Tasmanian-born artist Brodie Neill, who decided to create a table made from recycled ocean plastic.

Ewan McEoin, NGV’s senior curator in contemporary design and architecture, is responsible for commissioning many of the works for the Triennial. The sprawling exhibition which runs until April 18, is a partnership with Mercedes-Benz, a sponsor of the NGV for more than 10 years and committed to exploring the intersection of artistic disciplines, design, innovation and technology. McEoin says Neill has prior form combining technology and sustainable elements in his work. “He’s always been interested in post-industrial waste,” says McEoin. In 2008 Neill created a chaise lounge built from a mixture of reclaimed plastics and woods, turning them into a single organic, smooth, solid object. “He was already in the space of thinking about recycling or upcycling, and the technology involved.”

Creating Gyro was a labour-intensive process. Made from tiles of ocean plastic set in resin, Neill sourced the plastic from around the world. Sorting the materials in his London studio, Neill filtered out unusable fragments and arranged what remained by colour. Blues, dark gradients and marine colours were most common. The reason for this is grim – bright colours such as reds and yellows are “more commonly eaten by fish,” says McEoin. “Consequentially the blue look has that darker side to it. These are the plastic bits the fish don’t eat.”

McEoin says Gyro isn’t Neill necessarily trying to solve the world’s plastic problem, he’s trying to get us thinking about it. The table’s form is another clue that reflects that aim: it’s in the style of a “specimen table”, traditionally a bespoke object crafted for adventurers incorporating souvenirs of their journey, typically things like ivory, gems and jade. “This goes back to the 17th and 18th centuries,” says McEoin. “That table would be representative of your exploration.”

That era was the beginning of global trade and the industrial revolution. Now unchecked industry and the movement of plastics is a bigger environmental threat than ever. Neill’s piece is a specimen table for a globalised, post-consumer world, bringing home far-flung remnants of our lifestyle. “Plastic has been embraced by designers since World War Two – back then it symbolised this utopian future. But it’s had such a long-term negative impact. And it reflects how far objects can travel in our oceans.”

As a designer and consumer himself, Neill is aware of being complicit in this cycle. “He’s a designer, which is about making and selling things,” says McEoin. “But here he’s asking: what types of things do we need in the future? The answer is we need things that don’t just address problems, but undo them. The challenge for designers is to ensure their materials don’t have a negative impact.”

In this way Gyro is a call to arms for both designers and consumers to explore sustainable options. Neill is now interested in the idea of developing a scaleable eco-material from this project. If he can do that, the Gyro table won’t just be a talking point but a step towards a practical solution.

This article is produced by Broadsheet in partnership with Mercedes-Benz, principal partner of the NGV Triennial.