Back To The Schoolhouse

Occupying a former Steiner school in Abbotsford, Schoolhouse Studios is a community-focused creative space that houses over 50 artists and designers. We spoke to curators Elizabeth Barnett and Alice Glenn. Ben Helweg from Who By Fire 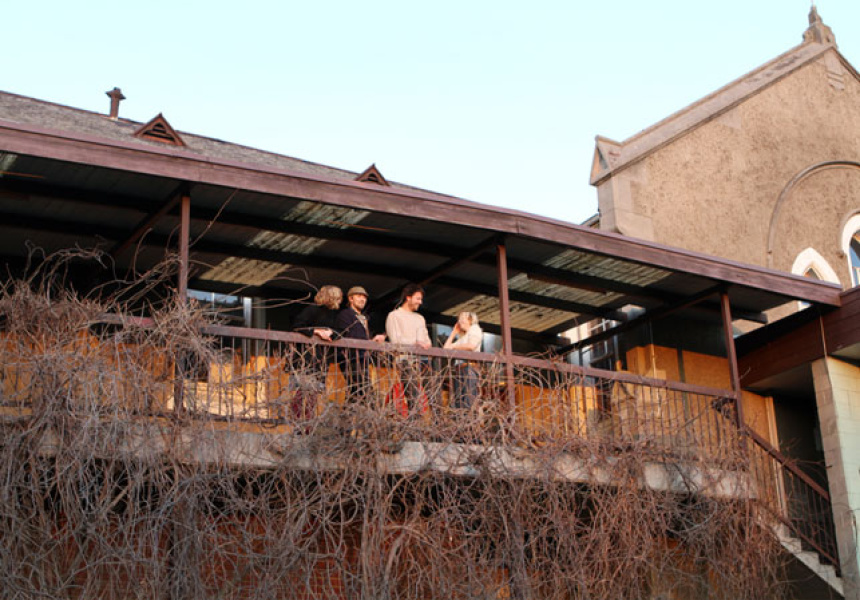 “I feel like community isn't something that comes naturally to our generation,” reflects Alice Glenn, somewhat neatly articulating the connective attribute that she and co-curator Elizabeth Barnett have sought to implement in their re-imagining of a former Steiner school in Abbotsford as a community-orientated arts space.

“A lot of people have come from working out of their bedrooms,” says Barnett, who draws parallels to her former experience of lonely solo workspaces. This is largely how Schoolhouse Studios came to be; a mix of personal frustration and the joint recognition of the importance of a shareable, open environment that supports a lifestyle and profession, which at times can be incredibly isolating.

These studios extend beyond their usual function, encouraging cross-disciplinary collaboration, social interaction and, essentially, a community that exists both within and beyond the perimeters of the gated fence.

The monthly Show & Tell market evidences the point. “It allows the artists and designers to showcase and sell their wares from the studios’ front yard,” explains Glenn. Luring in curious locals, this “artisan garage sale” encourages a social exchange that is supportive to both artist and neighbourhood.

The girls place a high value on bringing people together and thus encourage work and play to co-exist, with additional activities including movie nights, book launches, plays, exhibitions, music gigs and even a spot of Sunday gardening to help harvest the vegetables and tend to the newly arrived chickens. As Glenn points out, “It’s a chance to work independently but come together socially, too.”

Wandering the studios, the atmosphere is friendly and welcoming. Smiling, the girls confess to regular impromptu studio visits, peeking in and exposing newcomers to the current Schoolhouse dwellers, such as record label Two Bright Lakes, architect Lauren Steller, communication designer Anna Harris, filmmaker Cameron Ford, visual artist Lisa Stewart and of course the girls themselves (Barnett, a printmaker, painter and illustrator and Glenn, a filmmaker, choreographer and joint-founder of No Lights No Lycra.

The diverse span of creative disciplines make opening each door in this time-stood building a unique experience. With no rules, the artists and designers have free reign over what is, unfortunately, only a temporary space. Ripping up dusty carpets, polishing floorboards and often re-designing the space, these studios come to resemble something that positively contradicts the saddening fact that in March 2012, 80 new town houses will force the demolition of this space.

It's an ominous fate, but one which Barnett and Glenn were fully aware of before signing the lease. Yet despite conceding to what could be an abrupt, unhappy ending, this story is directing its own – a tale of inspiring camaraderie, undeterred community spirit and, as the girls point out, a project that has been anything but futile. “Everyone is simply making the most of what they have now and that for us is what makes this process really inspiring.”

For upcoming events at the Schoolhouse Studios you can access a calendar on their recently launched website - schoolhousestudios.com.au - designed by Cameron Boyle.