In the Artist’s Studio: Brook Andrew

The Australian conceptual artist asks us to look at colonial narratives with fresh eyes. 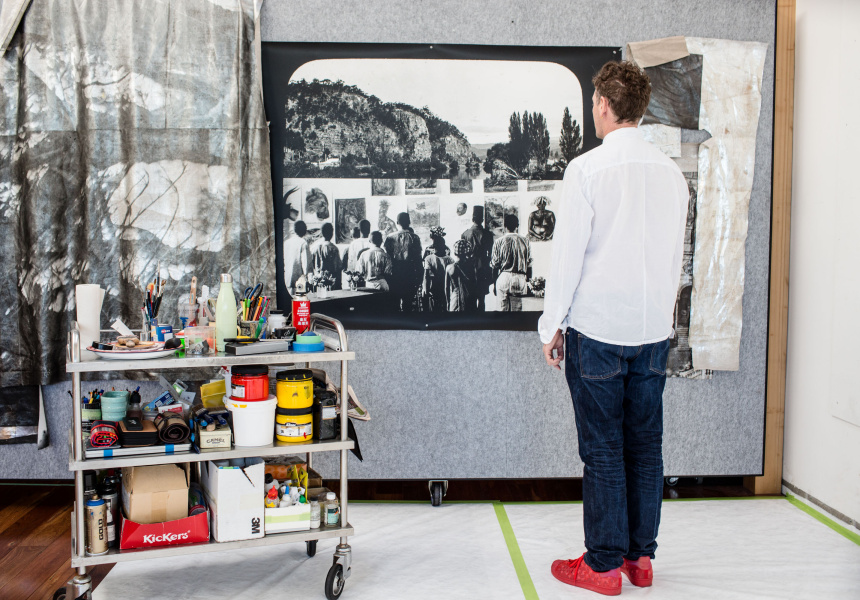 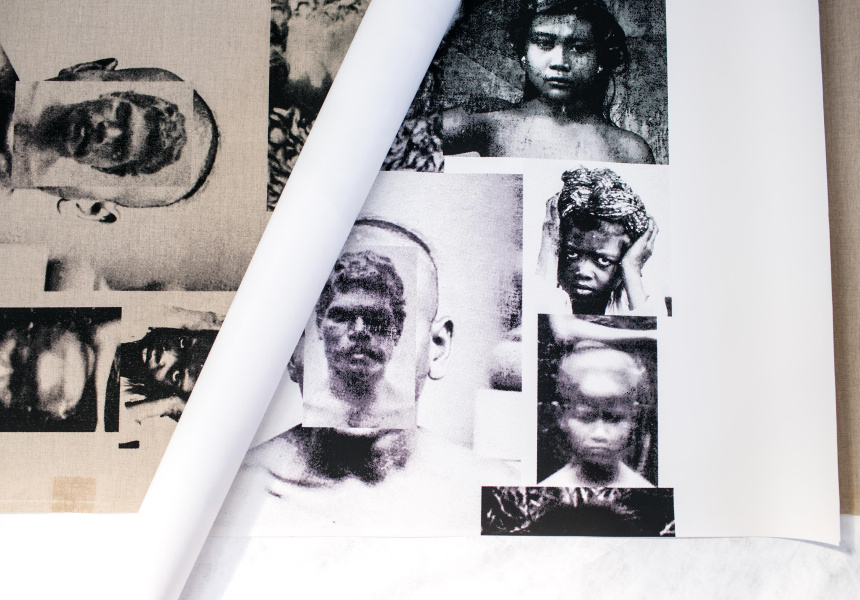 Installation view of Brook Andrew: The Right to Offend is Sacred, at The Ian Potter Centre: NGV

Brook Andrew’s studio is a bright, split-level space in a converted cotton mill in Footscray.

Canvasses are stacked against walls. On the desk in front of me there’s an old print of a schmalzy painting of a group of Neanderthals. One of the men has already been cut out, ready to be incorporated into a collage. Books, magazines, comics and newspapers are arranged into neat piles on tables. “I collect newspapers wherever I go,” Andrew says. “They tend to repeat themselves. Histories repeat themselves. Text repeats itself.”

Andrew is interested in how indigenous cultures are co-opted and appropriated by colonisers, and as his new show makes clear, art has played a role in that.

Recurring histories, forgotten legacies and trauma are at the heart of Andrew’s work. Across 25 years he’s worked and exhibited all over the world, expanding his original interest in Australian colonial narratives to similar global stories.

His new show at the NGV, The Right to Offend is Sacred, is a look back at decades of Andrew’s work; a dense hive of ideas balancing trauma with witty riposte and neon glare.

“I think it’s too easy in art-speak to call it a retrospective,” he says. “Really, it’s just juxtaposing things together and creating new ideas, telling new stories.”

An example: the pink neon sign above the door at his exhibition at the NGV demands that even before we enter, we “Kill Primitivism”. Andrew says primitivism – the Western art practice of appropriating aesthetics from “primitive” cultures – is a deplorable legacy. “It’s no different to saying let’s kill racism, or misogyny, or homophobia.” The neon looks and feels garish and playful, but there’s an undercurrent of menace and pain.

Beyond the entrance Andrew uses anything and everything in service of his ideas –photography, painting, printmaking, collage and sculpture, neon lights, artefacts, advertising slogans and found objects, often presented without alteration.

Take the two rows of ethnographic portraits showing indigenous people from around the world. The images, in two rows facing each other, are covered in a veneer of glitter and displayed on easels. The rows lead to the oversized horn of an enormous gramophone, behind which is a large cabinet of colonial curiosities including a human skull and books on Aboriginal craniology. Nearby, collages juxtapose New York Times headlines about Iraq and Palestine with photos of baroque interior design.

Spending so much time delving into the history and stories of other cultures has given him a different perspective on issues back home. The title of his NGV show illustrates this. It’s hard not to read it as an ironic comment on the repeal of “Section 18C of the Racial Discrimination Act”, particularly given Andrew’s Indigenous heritage. But he doesn’t like to be pinned down like that.

“I see myself as a global artist,” he says. “I engage with global issues.”

These global perspectives, though, often refer back to home ground. He’s incensed that so many Australians don’t know their own history beyond the colonial narrative we’re fed.

“Australians go to Auschwitz, or the Killing Fields,” he says. “Why don’t they go to the sites of massacres here and see how devastating that is?”

Soon work will take him abroad again. Later this year he’ll be in the Smithsonian in Washington DC for two months, researching memorials. He’s already been in Cambodia researching “trauma tourism”, which attracts throngs of people to the Killing Fields.

Andrew only spends about six months of the year here in Melbourne. When I visit, the studio is clean and relatively empty. His latest batch of work has been moved to Tolarno Galleries in the city, where another new show is in the works.

Even as he finishes putting final touches on two shows he’s bringing in new canvasses and laying new prints out on the floor. There’s no start or stop to his work – it’s an ongoing project.

“I never work with an endgame,” he says. “I’m a believer that things change.”

The Right to Offend is Sacred is at NGV Australia until June 4.