Produced by Broadsheet in
partnership with Australian Centre for Contemporary Art.

The Artist Who “Composes” Using Electricity

British artist Haroon Mirza works primarily with the “medium of electricity” – basically, you need to see and hear the work to understand it. In partnership with ACCA, we talk to senior curator Annika Kristensen about this surprising new exhibition. 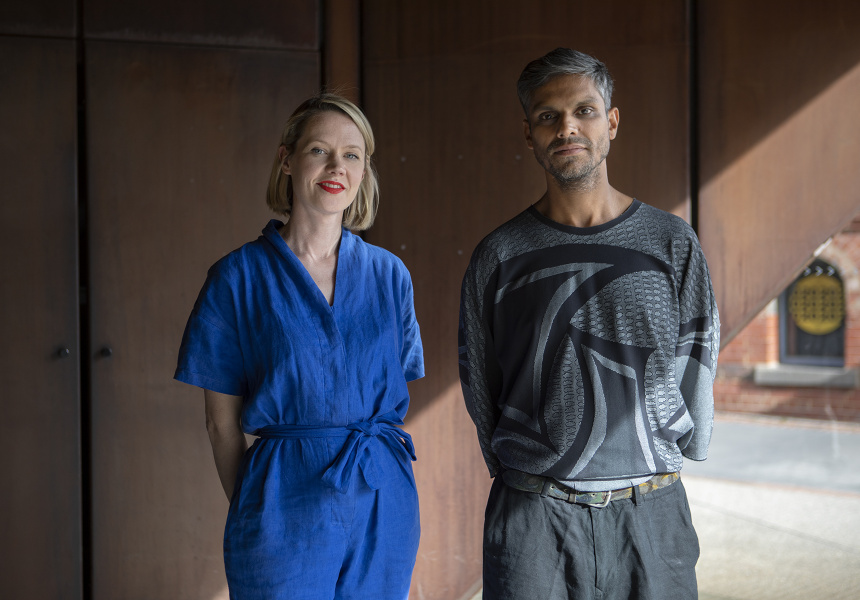 The Australian Centre for Contemporary Art (ACCA for short) has developed something of a reputation for bringing to Australia the work of artists who are both "big" international names and also far enough from the mainstream to remain interesting. The latest of these is London-based artist and "sculptor in electricity" Haroon Mirza, whose exhibition will combine a retrospective element with new work commissioned especially for this show.

Annika Kristensen, the gallery’s senior curator, explains that ACCA's annual international exhibition slot "allows ACCA to engage with artists who are at an established level in their practice” that Australian audiences may not have been exposed to before. “They're usually artists who've had a degree of international success and this is an opportunity for them to create new work in a new context, and to engage with Australian audiences and artistic communities,” she says.

In these shows, artists often create work specifically for ACCA – anyone who's been to the space will know that its scale and layout can be intimidating enough for visitors, let alone for the artists tasked with the challenge of filling it. Kristensen laughs, "Artists tend to either work with the building or against it. Usually it's an exciting opportunity to make work that responds to the scale of the building – which is a quality that really makes ACCA unique."

Happily, Mirza has chosen the former option – to work with the space, notwithstanding the unique challenges that it poses an artist whose work is so reliant on sound. "There are lots of hard surfaces and strange angles and large, cavernous spaces," Kristensen says. "Acoustically, that can be really challenging. But [Mirza] is really attuned to how acoustics work in a space, and ... he has really embraced it."

Mirza's work is perhaps best explained to those not familiar with it as "sound art", but the artist himself tends to reject that label. Kristensen explains, "Haroon often talks about himself as using the methodology of a composer. He thinks of himself as a composer who is sculpting in the medium of electricity, using light, sound and architecture, and sculpting them into new forms. So when we were thinking about the exhibition in its infancy, we wanted to extend that analogy, and look at ACCA itself as an instrument, and the exhibition – that will take the form disparate works – coming together as an overall score ."

Interestingly, Mirza's rejection of the conventions of the art world extends to the conventions of authorship. Perhaps influenced by his background in music, he often positions himself in the same way that, say, someone like Kanye West has done on recent albums – as a sort of curator, bringing in other producers who can create the sounds that he wants on a specific track.

In Mirza's case, this idea manifests as extending to other artists the opportunity to collaborate on work that they might otherwise present as purely solo endeavours. Kristensen explains, "Haroon has had a long-standing interest in collaboration, and how other disciplines are much less hierarchical than art, which privileges the solo artist."

That idea is central to Mirza's ACCA show, The Construction of an Act, and involves, yes, the construction of an act. Kristensen says, "The central component of this exhibition is a recording studio that we're building into the exhibition." The studio will be home to various other artists who've been invited for residencies. "We've invited a composer, who'll write a score based on a script that Haroon has written. In the second week, that score will be interpreted by a series of musicians, and then in the third week we've invited Julie Cunningham, who is a London-based dancer."

Cunningham will be "choreographing a performative response [to the score] with another dancer, and then a fourth residency will [involve] two writers, who will be writing a collaborative and experimental response to the exhibition." Once the residencies are complete, there'll be a show: "There will be a live performance on Tuesday October 8, as part of Melbourne International Arts Festival, which will be the first and only time that all the elements will come together."

As Kristensen says, this is quite ... unusual. "It's quite a radical gesture to open a show that still has work to be completed, but this is the experimental nature of Haroon's practice."

One imagines that as a curator, working with an artist who has such an unusual approach to art must be both challenging and fascinating. Kristensen laughs, "Commissioning is an exciting process, but it can also be quite an anxiety-inducing one, because no artist says, a year out from a show, 'Oh, this is definitely what I want to do!', and still feels the same 12 months later. So you have to work quite responsively and nimbly, and sometimes things can feel a little beyond your control. You have to develop a lot of trust with the artist you're working with ... It's always a risk in commissioning work because you're never quite sure what you're going to get, but that's also the absolute joy in doing it."

Haroon Mirza: The Construction of an Act is on at ACCA from September 14 to November 17.

Produced by Broadsheet in
partnership with Australian Centre for Contemporary Art. Learn more about partner content on Broadsheet.