Produced by Broadsheet in partnership with Ovolo Hotels.

Who puts the art in an art hotel? In partnership with Ovolo South Yarra, we speak to one of the artists responsible for decorating the walls with retrofuturist flair. 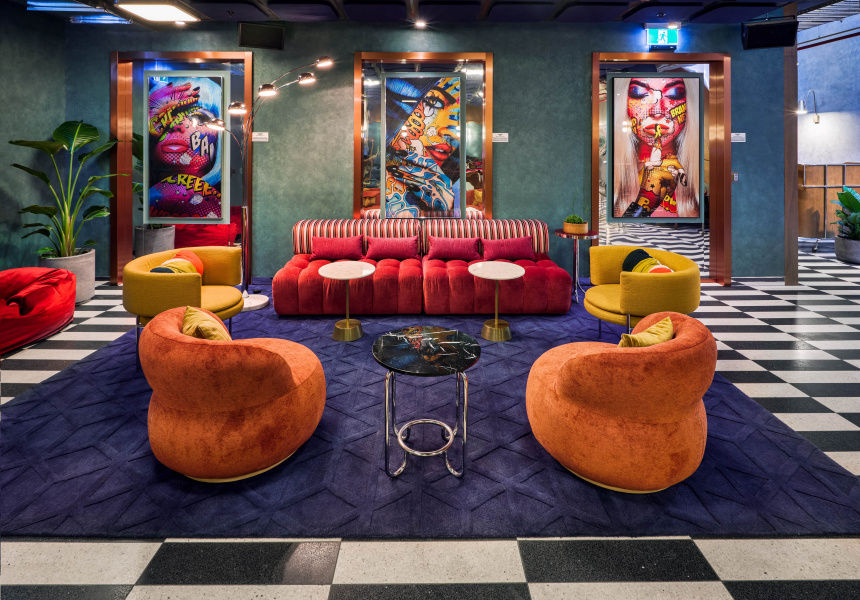 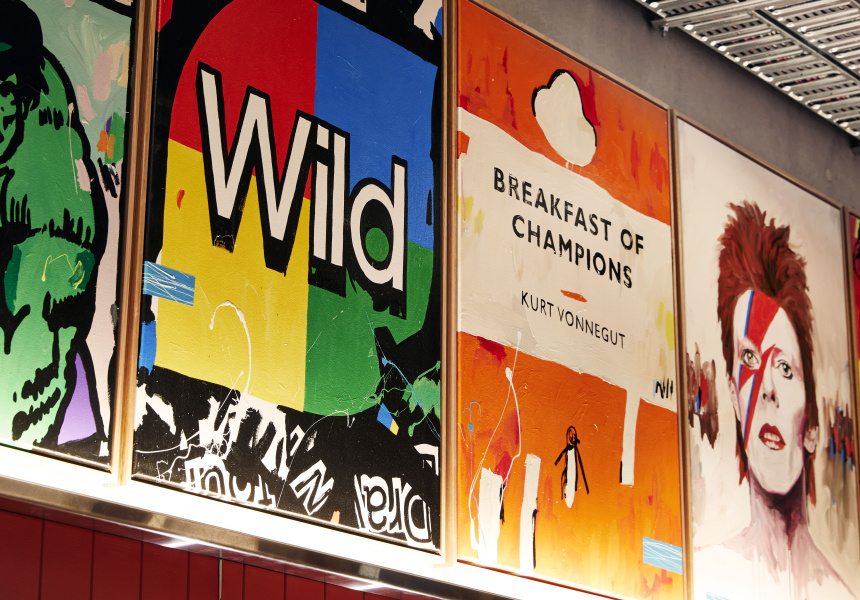 You enter a lobby and are immediately drawn to a neon fireplace with bright orange flue. There’s a domineering, six-tonne concrete reception desk, rather like a futuristic airport check-in. A vast internal lightwell, the largest in the country, is complemented by retro-patterned wallpaper and furnishings, and gleaming chrome touches. And then there’s the art.

This is the scene upon entrance to Ovolo South Yarra, Melbourne’s newest boutique hotel. A collaboration with Melbourne-based interior-design legends Luchetti Krelle which opened in April 2021, it boasts a retrofuturist aesthetic that draws heavily on pop art, disco glamour, arcade games and the rock gods of the ‘60s and ‘70s.

The lobby and hotel restaurant, Lona Misa, are splashed with more than 60 works from nine bombastic artists, including Johnny Romeo, Punk Me Tender, Jean-Baptise Lana (aka ‘Jisbar’) and Ben Tankard. It’s not uncommon for “art hotels” to showcase art as a feature of a stay – but how does stuff like this get there?

Speaking from his studio in the Blue Mountains, Tankard says the hotel commissioned him to create the oil-on-canvas Pop Series, based on his love of pop art stalwarts such as Jasper Johns, whose painting Flag (1955) is an iconic subversion of American patriotism.

“He painted the American flag, but really chunky and dripping, and multi-layered,” says Tankard of Johns. “I like taking existing images and transforming them with texture and accidents and process, making them into really interesting works of art. Aesthetically I like the balance between clean lines and flat areas of colour, and then messing them up to give them energy. There’s a dynamic between chaos and design.”

The result is paintings steeped in nostalgia and humour, that distort images already firmly entrenched in our psyche. There’s also an emphasis on the cultural offerings that generation after generation of teenagers have been hungry to consume.

Tankard began developing his post-modernist appropriation style in 2015, unveiling his Unpopular Penguin series, which dismantles the instantly recognisable design of the Popular Penguin paperback series. Some of his distorted book covers hang in Ovolo South Yarra: A Clockwork Orange, The Catcher in the Rye, Fear and Loathing in Las Vegas and The Electric Kool Aid Acid Test.

“Those Penguin books have been around since 1935,” says Tankard. “Every few decades they change the design, but then they go back to the original because you can't beat it and people love them.”

His works for the hotel also include a cover of Life magazine with John Wayne in an electric orange neckerchief, and instantly recognisable remnants of childhood: UNO cards, a section of Monopoly board.

Above the lifts, there are his photo-realistic album covers and portraits of the likes of Debbie Harry, James Brown and David Bowie. “They’re a good fit because the hotel has record players in the rooms and all the furniture and fittings are styled to a kind of 1970s mod look,” he says.

They might be on the walls, but – as any art smart hotel knows – if you can’t yet catch a booking, you’ll be seeing them on your Instagram feeds soon enough.

This article is produce by Broadsheet in partnership with Ovolo Hotels.

Produced by Broadsheet in partnership with Ovolo Hotels. Learn more about partner content on Broadsheet.