The vibrant, kitschy piece covers two sides of an ageing seven-storey building and comes to life at night with neon lighting. 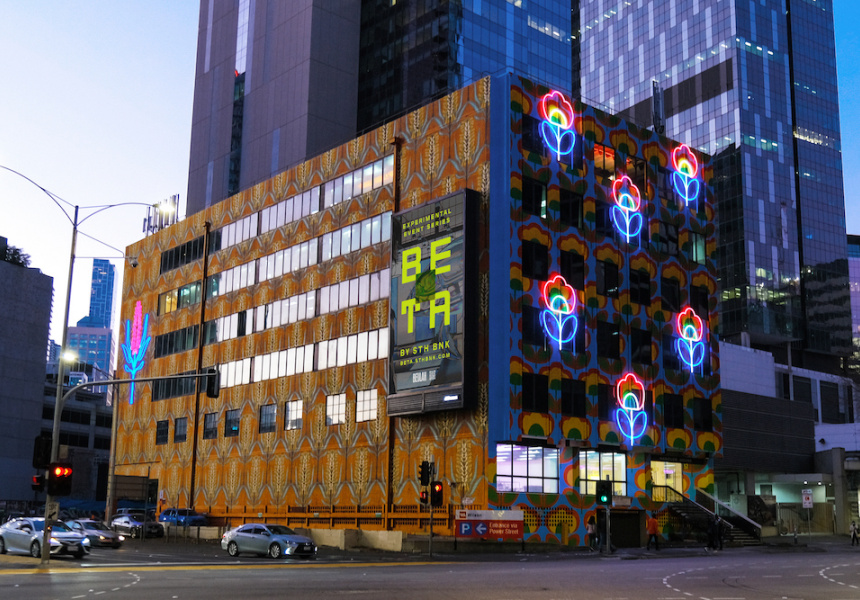 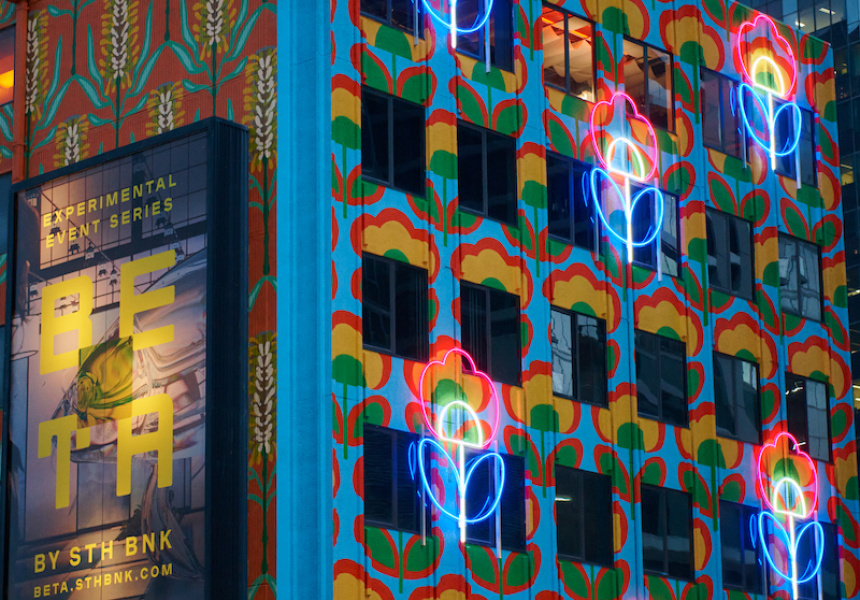 When Hanover House was built in 1973, it was the tallest building in Southbank. Over the past few decades it’s lost this distinction, and its seven storeys have come to look almost quaint in comparison to the looming neighbours.

But this year Hanover House is standing out once again thanks to Outdoor Living, a vibrant new mural by artist Atong Atem covering two sides of the building. Atem was commissioned by property developer Beulah, which plans to build Melbourne’s tallest-ever tower on the site down the track.

The Power Street side features a large-scale banksia motif, while the City Road side is adorned with tulips. It’s an “ode to vintage indoor kitschy wallpaper”, Atem says. The work looks different depending on what time of day you visit. At sunset, instead of gradually becoming invisible, the paint gives way to neon lights – and an eight-metre-tall banksia outline appears alongside five bright tulips.

“I love the idea of people walking past a distance away at night-time and just seeing these floating flowers with no context,” Atem says. “It was really important for me to respond to the natural environment and not have a work that was fighting the fact that the sun will set every day.” Outdoor Living was also an opportunity for Atem to both expand her work as an artist and explore her interests. Prior to this, she primarily worked in photography and video, so a mural of this size was quite a departure.

“I was really anxious about it at first because I felt that it was too big of a scale for me,” she says. But the challenge was part of what drew her to the project, as well as the chance to create something that would be accessible to more people. “I have such an interest as well in putting art outside of the white cube – outside of contexts that are historically elitist,” she says. “And public art is the way to do that.” The work itself taps into other themes and ideas Atem is passionate about. She’s drawn to the ’70s, as it was a really formative time for African photography. She also uses a lot of wallpaper and patterns in her work, and was interested in the concept of putting something personal and intimate, like the interior of a living room, on the outside of a commercial building.

Vintage wallpaper has fascinated her for a long time as a marker of “colonial kitsch aesthetics and their perseverance throughout history”. “It’s not a celebration of it … it’s an acknowledgement of its prevalence in Australian history and what that prevalence means,” Atem says. This ties back to her decision to centre plants in the design – it’s a way of speaking to the often-fraught relationship between the built world and the natural environment. Overall, the mural is also about the building itself, which is set to be demolished – looking to its past and towards the future. While Atem designed Outdoor Living, she couldn’t have done it without her collaborators: muralists Georgia Harvey and Chris Henderson, LED neon-lighting maker Electric Confetti, and electrician Tolliday Electrical.

“My favourite, favourite part has been seeing every now and then people sharing on Instagram the photos they’ve taken,” Atem says.

Of these pictures, Atem likes best the ones taken by locals “from their windows, or their apartment buildings, at night-time”. The work was unveiled during another lockdown, meaning initially it was only accessible to people who lived within five kilometres (that distance will be 15 kilometres from September 29). “I think because it’s so overwhelmingly bright, it comes across positive and uplifting,” Atem says “And that makes me feel really, really good that regardless of my intention, or the message, or what I’m trying to get across, that people are seeing this beautiful artwork and it makes them feel good.”