In the Galleries: Five Shows to See Now

Viral graphic design and exploding violins in an unforgettable installation – here’s your month in art. 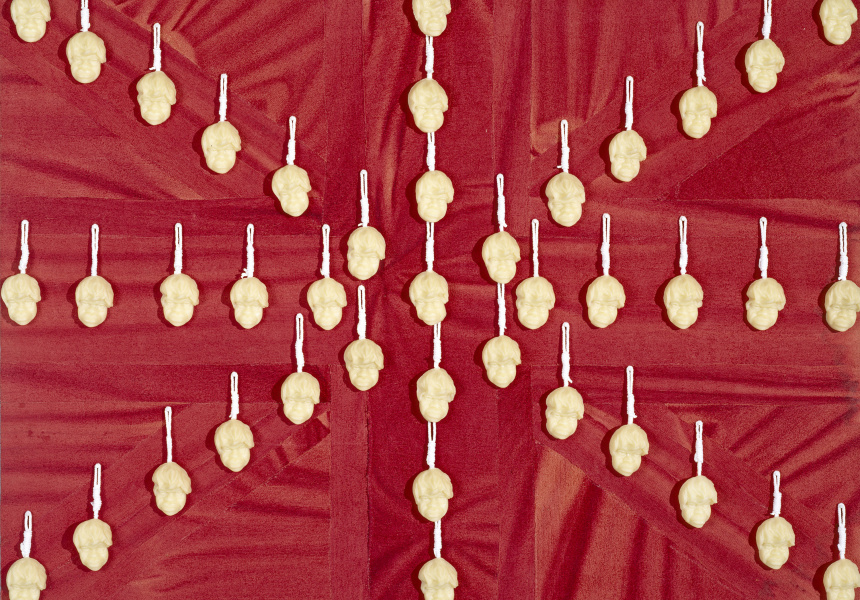 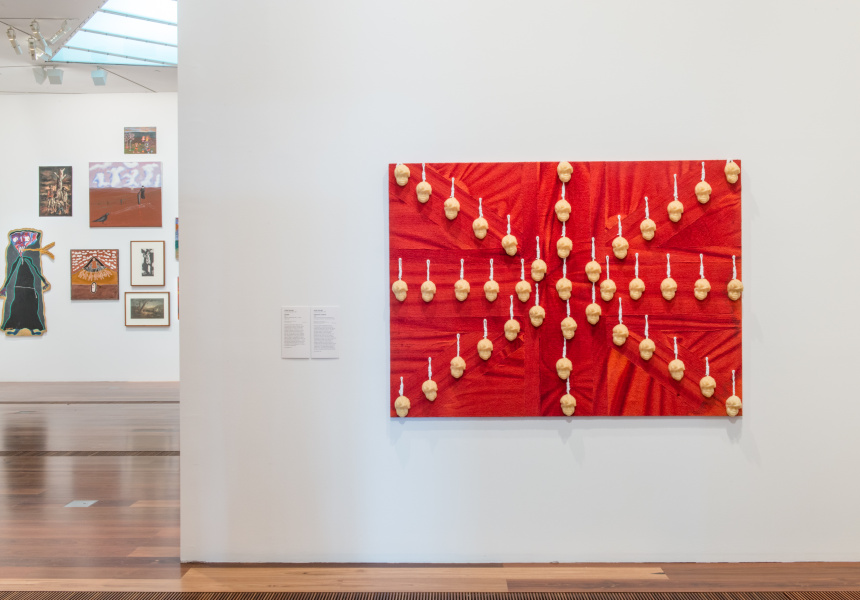 Exhibition image of Colony: Frontier Wars which is on display at NGV Australia 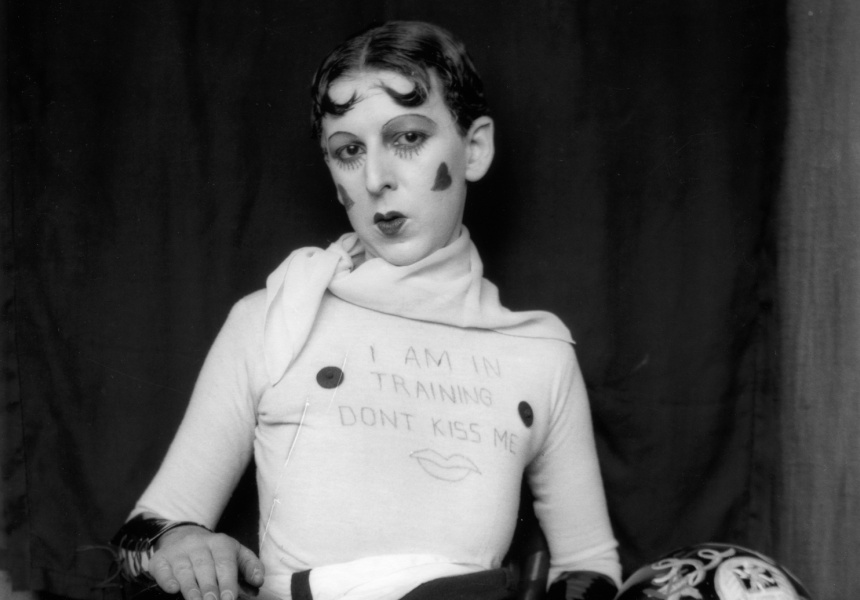 Colony: Australia 1770–1861 and Frontier Wars
This sprawling exhibition at NGV Australia comprises two parts across two floors. The ground floor exhibition, Australia 1770–1861, opens with a formidable array of shields pointing at visitors. Beyond that, a collection of Australian colonial artifacts: early maps of what was then known as New Holland or Terra Australis; taxidermy; portraits of European colonialists; and idyllic pictures of Sydney Harbour and its early settlements. It’s a glimpse of the lives Europeans were making for themselves in a new land, accompanied by ethnographic portraits of the Indigenous people who already lived there.

The third floor exhibition, titled Frontier Wars, is where the show begins to amp up. The 1902 painting Landing of Captain Cook at Botany Bay, 1770 by E. Phillips Fox addresses what the work downstairs does not – Cook and his men disembark from a boat in the foreground, a group of spear-wielding Aboriginal people approach in the background. This floor shows a selection of the best and brightest contemporary Indigenous work, which expresses the colonial narrative with urgency and pain. Julie Gough’s The Chase incorporates an imposing sculpture made from tea-tree branches, and Christian Thompson and Brook Andrew appropriate ethnographic illustrations and photographs to tell their own stories and experiences. Bindi Cole Chocka and Vernon Ah Kee use typography to make plain statements about the far-reaching, still-here impact of Australian colonialisation. Seen alongside the colonial fairytale downstairs, this is a captivating look at the ongoing attempt to re-understand the past. As Christian Thompson has said, “It’s never too late to pierce, subvert and re-stage the spectres of history.”

Colony: Australia 1770–1861 and Frontier Wars is at NGV Australia, Federation Square, until July 15.

Superstructure by Experimental Jetset
Experimental Jetset is a trio of Amsterdam-based designers known for their bold use of typography. Their best-known work, a Beatles T-shirt (John & Paul & Ringo & George, 2001), was endlessly parodied and reimagined outside of the art and design world, and shows the power of type: it says Beatles without using the word Beatles or any imagery, just using text in Helvetica.

In the hangar-like space of RMIT’s Design Hub, Experimental Jetset has assembled something that feels like controlled anarchy. A maze of plywood boards, stacked like precarious dominoes, display decades of work. Unfolded posters and flyers hang from the boards on bulldog clips. Helvetica abounds. Politics, art and capitalism overlap. Superstructure is a look back at the design studio’s work, arranged into its four main artistic influences: constructivism (modernist, angular Soviet art form devised for the common good), situationism (surreal, critical responses to capitalism breaking down the walls between the artistic and the commercial), the provotarian movement (an obscure sixties Dutch anarchist movement) and post-punk (sharp guitars, pessimistic atonal vocals). Jetset’s work sits somewhere in the middle of all that.

Superstructure is at RMIT Design Hub until May 5.

Closer by Meredith Turnbull
Melbourne artist Meredith Turnbull’s new exhibition explores the crossovers between sculpture, decorative objects and image. Turnbull has pulled objects from the University of Melbourne’s huge collection, then photographed them and placed the originals next to the photographs. Do we look at the objects themselves first or her photographic impressions of them? Turnbull’s selections focus on ornate, unusual shapes: finely crafted jewellery, stoneware, glass figurines and the images reflect the organic, imperfect surfaces.

Closer is at the Ian Potter Museum until July 1.

Entre Nous by Claude Cahun and Clare Rae
In 2017 photographer Clare Rae took part in an artist residency on the island of Jersey in the English Channel. There she researched the photography of early 20th century avant-garde, transgender French-born artist Claude Cahun and devised her own photographic responses. CCP presents both side-by-side in Entre Nous.

Cahun’s self-portraits are held up as subversive representations of the female body, especially given the era in which they were taken. Between 1916 and 1950, Cahun staged the dramatic and eccentric self-portraits: posing in the Jersey landscape, reclining in a window, or on the beach. They’re provocative and full of personality. Rae doesn’t merely emulate what Cahun does. She offers her own performance – stiffer, with idiosyncratic eccentricities of her own. It’s a response to Cahun and a collaboration across the decades that shows a visual language just as captivating today as it was a hundred years ago.

Entre Nous is at CCP until May 6.

Impossible Composition by Oliver Beer
There are two elements to Oliver Beer’s show at Anna Schwartz Gallery. On the walls, white canvasses are broken up by wall sculpture that first appears to show abstract lines. Then, on closer inspection, the lines and curves come into focus and we see the outlines of a violin – a bow, a neck, its curved waist and tuning pegs. A violin has been fragmented and set into resin. It’s still but kinetic, as if it’s a snapshot of an explosion.

Speakers, suspended from the ceiling, play sound that also feels splintered: four voices across four speakers, coming from four different parts of the room. They converge as an ethereal hum of operatic, chanting voices. The four channels are recordings of four different singers performing a version of their earliest musical memory in the four tips of the Sydney Opera House, which are layered into a new arrangement by Beer. I stood in the gallery, listening with my eyes closed, for longer than was polite, and came out refreshed.

Impossible Composition is at Anna Schwartz Gallery until April 21.