The Art of Snagging

Artist and one half of fashion duo P.A.M. Misha Hollenbach's new painting and sculptural show Smagliature opens at Utopian Slumps this Saturday, fuelled by meat along the way. 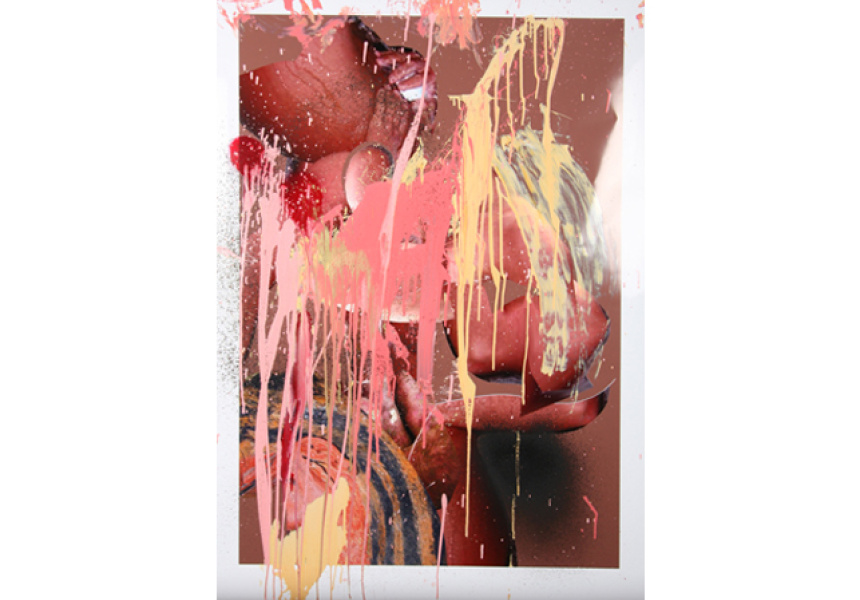 To try and define a practice as wide-ranging as Misha Hollenbach's, one has to be prepared to keep their mind open. For his new show, Smagliature, opening at Utopian Slumps on Saturday, Hollenbach (who by day makes up one half of cult fashion superstars P.A.M.) has produced a new body of paintings titled MEATSLAP, a slightly scary title that also helps define his particular (and, might we say, peculiar) process.

Using the humble sausage as his paintbrush, Hollenbach coats each snag with colourful enamel paint only to fling them onto his canvases of large, glossy Canson prints. “He specifically uses sausages, chorizo, kabana or European processed meats, to be precise,” clarifies Melissa Loughnan, director of the dynamic gallery.

Spontaneity, absurdity and quasi-Dadaist references infuse the works of the Melbourne-based artist, who sees instinct as vital to driving his work forward. “My practice is increasingly heading towards making things, rather than thinking about making things,” he says. “I’ve always had this incessant need to pick up pieces of paper and crap, but not really known what to do with it, so I decided that I needed to start sticking stuff down.” Quite literally, it seems.

Without ignoring the primitivism of sculpture, Hollenbach also presents a series of automatic ceramics. Haphazard could be one word to describe the three-dimensional works, where the idea of control would seem to pervert their course. The heavily glazed, bodily lumps in cracked black, white and gold tones have child-like experimentation at their core. Their integrity remains purely material and sensuous, without the need for the cling film of heavy conceptual discourse.

Here we find a cultural tonic: a welcome sense of play scribbled all over with Hollenbach's recognisable signature.

Smagliature at Utopian Slumps this Saturday June 2 and runs until June 23.