One of Melbourne’s most important post-war houses, Robin Boyd’s masterful Boyd Baker House is going under the hammer. 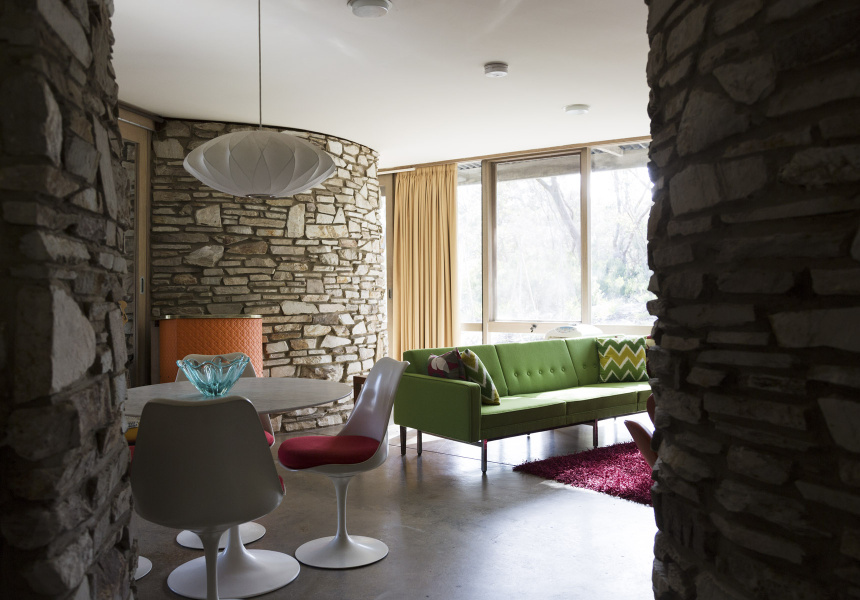 Robin Boyd’s architectural masterwork, the Boyd Baker House, will go to auction at the end of August. The house has only had two owners: the first was mathematician and academic Dr Michael Baker, who commissioned Boyd to build him an “Australian homestead” surrounded by scrub and bush. Baker then sold the property in 2006 to lawyer Peter Mitrakas, who lovingly decked the property out with vintage furniture and artwork, then made it available to hire for weddings, parties and other events.

Robin Boyd was one of Australia’s most significant Modern architects. Decades ahead of his time, his legacy is two-fold – he was both a designer and a design advocate, regularly appearing in the media to discuss the principles of good architecture. His houses are dotted all over Melbourne and are celebrated for their distinctive brand of Modernism, which was based on openness and sensitivity to the site.

Sitting on 30-odd acres of natural mallee bush land, and made up of three distinct buildings, the Boyd Baker site represents a precious piece of Victoria’s cultural heritage. The property includes the Boyd Baker House – a ruinous piece of Modernism designed around a classic Boyd interior courtyard and clad in local stone – the separate Dower House, which was built as an apartment for Baker’s mother-in-law, and the Library, which was built to house the Bakers’ large collection of books. The two houses were designed by Boyd, and the Library was designed by Roy Grounds, who also designed the NGV on St Kilda Road. Grounds was Boyd’s former business partner, becoming involved because Boyd had passed away by the time the library was commissioned.

The current owner Peter Mitrakas gave Broadsheet a tour of the house. An avid Boyd enthusiast, Mitrakas explains what a pleasure it has been to own the property. “I've got a work of art that I can live in. It doesn’t get much better than that.” Upon buying in 2006, Mitrakas got the entire site heritage listed, which means the building is fully protected and cannot be altered without permission. “I think I might be one of the only home owners to ever voluntarily seek heritage protections,” Peter explains, “But it is such an important piece of design, so it was the first thing I did.” Mitrakas only hopes that the new owners feel as passionate about the property as he does.

For more information on Robin Boyd and his houses, check out the Boyd Foundation (robinboyd.org.au), which runs Boyd-related events and open days.