The Archibald Prize at TarraWarra Museum of Art

For the first time, TarraWarra Museum of Art hosts the Archibald Prize with a strong and varied suite of finalists. JF Archibald (1856–1919) lived a life that he considered quite bohemian and European, going so far as to change his first and middle name from John Feltham to Jules François. Archibald had a passion for journalism (he and a friend founded the Bulletin magazine) and also for the arts, particularly in promoting the work of younger artists and writers. After combining his passions by commissioning a portrait of poet Henry Lawson, Archibald was so pleased with the result that he left money in his will for an annual portrait prize, aiming to foster portraiture, support artists and perpetuate the memory of great Australians.

Of these, 41 works were shortlisted to tour regional galleries Australia wide. For the first time, TarraWarra Museum of Art in Healesville is hosting the exhibition this year, with new curator Anthony Fitzpatrick’s stunning exhibition design giving each work the space to be admired by the substantial crowds.

What makes the Archibald Prize so interesting is seeing the individual, unique approaches to portraiture, from detailed, thorough and visually accurate portrayals to ideas and individual interpretations. While each work might not be appreciated by everyone, the breadth and variety of the artists, sitters and techniques provides interesting viewing, and having it exhibited in the idyllic surrounds of the Yarra Valley makes it a most worthwhile visit.

TarraWarra Museum of Art hosts the 2011 Archibald Prize until July 31. 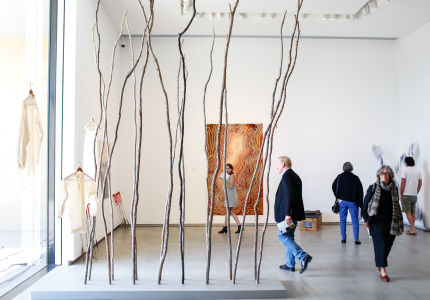