It’s time to say goodbye to a special Melbourne gallery. 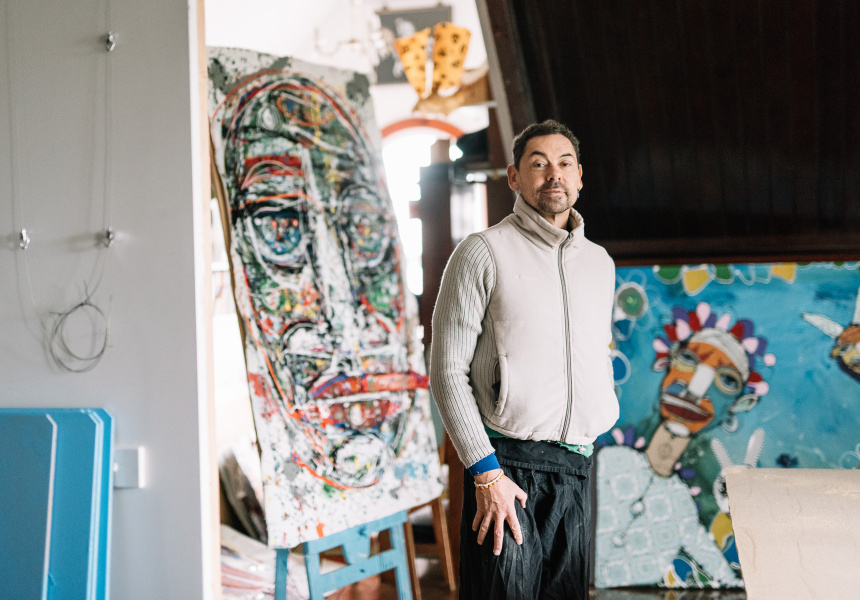 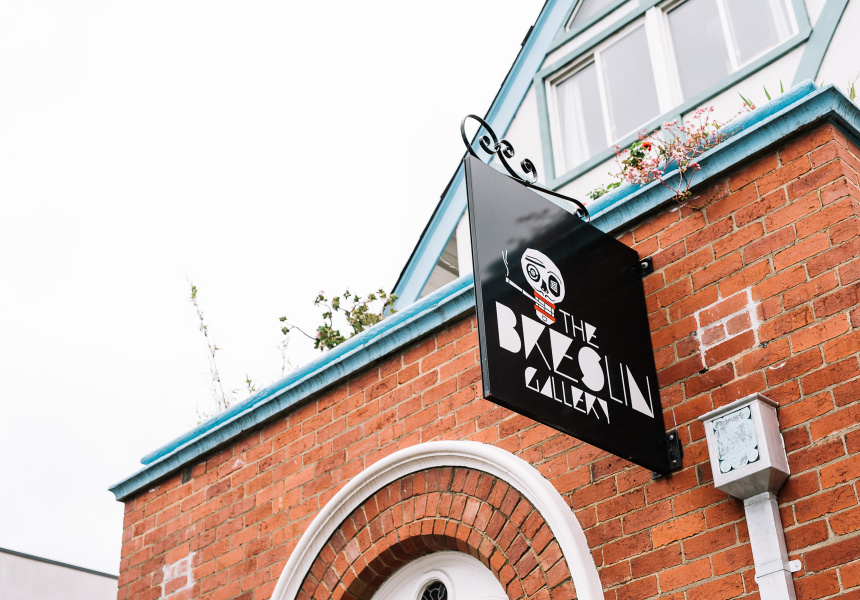 It takes a lot of time and energy to rebuild a grand old church. Almost as much time as it takes a body ravaged by cancer to crawl back from the brink of death. Over the past five years, artist Anthony Breslin has experienced both.

It took more than three years for Breslin to transform the early-1900s church (a “dump” when he bought it in 2009) in Melbourne’s Carnegie to the bright art hub, gallery and cafe it is today.

The unusual space goes to auction on August 6 and the following weekend hosts Breslin’s first Melbourne exhibition in six years. It will be a chance to say goodbye to the space he called home and to the people who filled it with art, chatter and a sense of community.

The restoration was a labour of love and nostalgia.

As a child, Breslin attended the former kindergarten next door. During adulthood, he drove past the church and became obsessed with it, especially two stained-glass windows by artist Alan Sumner.

“The windows blew my mind,” he says. “They’re of Archangel Michael and Saint Joshua. They’re amazing. I kind of built the building around the windows. They were just precious. I still love them.”

Transforming the whopping three-storey structure was one hell of a task. “I nearly killed myself doing it,” he says.

Breslin’s dreams were nearly dashed when a fire ripped through the building and turned much of his hard work to ash. He began again from scratch, using original fittings from the demolished 1930s hall next door.

“I went and got all the memorial plaques and stone from that building and recycled doors from the early 20th century,” he says, smiling.

“I was really struggling but was determined to keep going. I just had no money. People were leaving food packages at the door.”

Friends and the art community rallied together, raising funds through a street party to start the rebuilding process while Breslin battled insurance issues in court.

When it was complete he lived upstairs, in a loft as bright as his tribal-inspired paintings on the walls. The building hosted art exhibitions, fundraisers and was a home, studio and coffee spot.

Art is in Breslin’s heart. After finding his creative groove in Africa, he went on to study at RMIT and has since had more than 50 solo exhibitions and myriad public art projects worldwide.

When blood cancer hit in 2014 he didn’t see it coming. Before launching his art career, Breslin was an athlete, and his body remained fit from a daily yoga regime. It was a shock.

The diagnosis was myelodysplastic syndromes (MDS). “Within eight weeks I had full-blown leukaemia,” he says. It was the same kind of cancer that had killed his brother, 11 years his senior. “He was just 38. My brother wasted away from all the drugs and in the end pretty much died from chemotherapy poisoning more than anything else.”

“I thought that’s what was going to happen to me. The hardest part of all of it is surviving the treatment.”

In a cruel twist of fate, Breslin was delivered the blow at Melbourne’s Alfred Hospital, while, in an upstairs ward, his father battled pancreatic cancer. It was devastating to a family who had previously lost Breslin’s mother to Alzheimer’s disease.

The prognosis for Breslin wasn’t good. “With the bone-marrow transplant there’s a 15 to 20 per cent chance you’ll die,” he says. “But that’s your best option to live. I walked out going, ‘What the fuck?’”

He spent time in an isolation room and was “nuked” with radiotherapy and chemotherapy. “I had a few close calls,” he says. “The irony is that as soon as I started getting through it all I got kidney disease from the drugs they gave me for the bone-marrow transplant. The closest I came to dying was probably last November when I was rushed to hospital and put in intensive care for seven days on my back on a respiratory system.”

Those were confronting times. “At that point there was no guarantee how long I was going live,” Breslin says. “As [my father] was dying he was also trying to keep an eye on me.”

Something positive came out of his period in hospital. During 10 weeks in an isolation room he occasionally found the energy to paint.

“My sister brought in tables and drawing materials, and I worked on artworks.” The result is his upcoming exhibition Exit the Blood Machine.

“[It] has a lot of work in it based on death, survival and illness. A lot of the figures I’ve done in it have bodies constructed to do with cells and bones and regeneration of blood. It is based on my experience and what I’ve been through.”

Once out of hospital, Breslin kept working, at one stage overseeing a crew of artists and schoolchildren who worked on the Anthony Breslin Garden Path Project at Koornang Uniting Church in Murrumbeena. “I was pretty sick doing it but had an awesome support crew,” he says.

He never made the opening event.

“I was rushed to intensive care,” he says. “The day before, I was down there, drilling and doing work but I was blown up like a puffer fish, leaking fluid.” It’s grim, but he’s positive.

“I don’t feel like ‘woe is me’,” he says. “[Cancer] changes you, there’s no doubt about it. It brings more depth to you and more empathy towards other human beings. You also become really aware of what’s important.”

That’s why it’s time to sell the building and focus on his health.

“I’d love to see it saved and kept as a public building, because when I built it that’s what my goal was,” he says. “For a private individual to open an arts hub as a community venture, it’s not really doable. It’s a big thing to take on.”

Saying goodbye will be difficult but the exhibition will be a chance to do so properly.

“The building is really testament to the history of the area,” he says. “It’s important for me and for lots of people who are hurting about it closing,” he says. “I’ll sit [at] the exhibition myself for three weeks on certain days and people can come and say goodbye.”

The future is creative. Breslin has been commissioned to work with communities at Uluru and has a series of lamps on the horizon.

“People say, ‘You’ve beaten cancer and done this and that’, but it doesn’t work that way.” He pauses. “People who die from cancer aren’t losers. People who survive it aren’t winners. It’s how you die that makes you a winner, not when you die. I think that’s really important to remember.”

“I should be dead, really. It just wasn’t my time and that’s because there’s greater forces at play going, ‘Okay, you’ve got a few more things to do and then I’m going to take ya.’”

The site goes to auction on August 6. Exit the Blood Machine opens August 13 and runs until August 28.