Altered States: In the Cut at ACCA

For In the Cut, a new exhibition at The Australian Centre for Contemporary Art, curator Hannah Mathews brings together 16 artists from all over the world to illustrate the diversity and relevance of collage today. 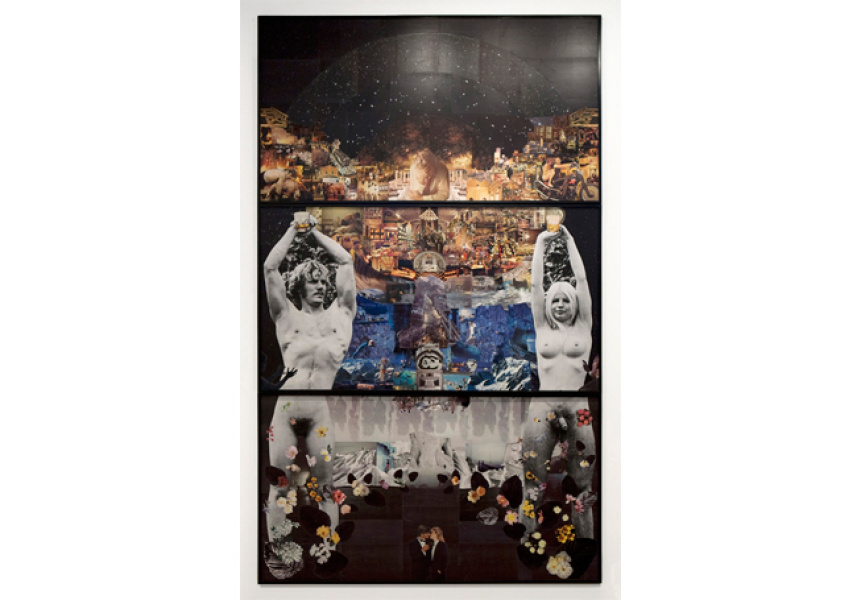 In many ways, collage is the quintessential mode of expression for the digital age. An art medium whose primary language is that of juxtaposition, it has been reinvigorated by the very processes that we use to navigate cultural traffic on the internet. For curator Hannah Mathews, collage is a way of harnessing information and forming a relationship with it. “Collage is a very personal thing,” Mathews says. “It has an immediacy and in terms of a vernacular language and pop imagery, it has a currency.”

While collage may have proven itself to be one of the most adaptable art forms, its ties to the material realm are widely felt throughout this exhibition. Some of the art on display may, indeed, send nostalgia-induced frissons of pleasure down the spines of those who miss the tactile delight of a pre-digital world.

Take Sydney artist Lillian O’Neil’s Attack of the Romance (2013), for instance. This three-panel work is a colour-saturated assemblage of photographic images sourced from books printed in the years 1940 to 1999. “All the images I collect are quickly becoming obsolete so I would like my work to act as shrines for this fading aesthetic,” O’Neil explains.

Like many of the pieces in the exhibition, her work acts as a map of the world around us. “I try to re-construct the world from memory, or at least map it,” she says. “By using vast amounts of images taken from hundreds of different books, strange combinations and all-encompassing snap shots form in which time and place are compressed.” Here, she explores the myth of romance, setting it against the fantasy of exotic locales and the harsh ruins of reality.

Elsewhere, the influence of the 1960s and 70s is felt directly – a time when collage played an important role in conveying political information and protests against the establishment. British visual and performance artist Linder Sterling questioned the relationship between women and domesticity with her iconic photomontage series Pretty Girls (1977). Sterling’s artistic sensibility was post-punk; she designed cut-and-paste cover art for The Buzzcocks and preceded Lady Gaga’s wearing of a meat dress by 30 years.

The scrapbooks of Richard Larter, elder statesman of Australian pop art, highlight collage’s capacity for immediacy, wielding imagery from popular sources such as cartoons and men’s magazines to address censorship and authority.

Collage today continues to intervene in our role as consumers, deconstructing the messages we read and receive. Ellen Gallagher draws on her Irish-African American heritage, subverting stereotypes of black Americans. In DeLuxe (2005), she places sources of identity suppression such as beautification - hair straightening and skin whitening - under attack. In what Mathews describes as “an aggressive intervention within the image itself”, Gallagher layers ads from mid-century magazines aimed at African-Americans with materials such as glitter, toy eyeballs, coconut oil and yellow plasticine, emancipating her subjects and steering the work into a sculptural realm.

Historically, collage has told us stories that didn’t appear in the grand narrative by rearranging information to create new spectrums of meaning. Collecting and archiving’s role in collage is brought to the fore in German artist Henrik Olesen’s, A.T (2012). Olesen’s interest in archival information led him to create a series of photo-text collages based on his research into the life of Alan Turing, the inventor of the binary system who was persecuted for being homosexual. Exploring the shifting nature of identity, Olesen draws on the legacy of German cultural theorist Aby Warburg, whose Mnemosyne Atlas, a pictorial anthology of art history, Mathews describes as a “rehistoricisation of canons of information”.

Other pieces in the exhibition tap the subconscious and the intermediaries between oneself and the creation of the work, using processes that draw on surrealist traditions. “Often it’s in the subconscious operation of things that the best ideas are found,” Mathews says.

Melbourne artist Ry Haskings’ Checkpoint Alpha Deadlock (2013) is an installation that intends to convey a meandering between different places. “I found myself always going back to an idea of a gateway, of going from one place to another and the stopping points in-between,” Haskings explains. Connections between source materials are arbitrary, with filmic and political references including Rainer Werner Fassbinder’s World on a Wire and a photo of a monument on the border of North and South Korea.

On display concurrently at ACCA is British artist Tacita Dean’s FILM installation, a 35mm film that uses analogue treatments in homage to the flickering luminosity and magic of celluloid. “The making of that film is in a way unpacked in this exhibition in terms of the presence of collaging techniques,” Mathews says. FILM is a fitting segue to an exhibition that is all about rearranging the way in which we see the world.

In the Cut and Tacita Dean FILM run from 10 October to 24 November at ACCA.