The NGV flips the cassette from side A to side B with a new show that explores Australian art, fashion and music in the 1980s. 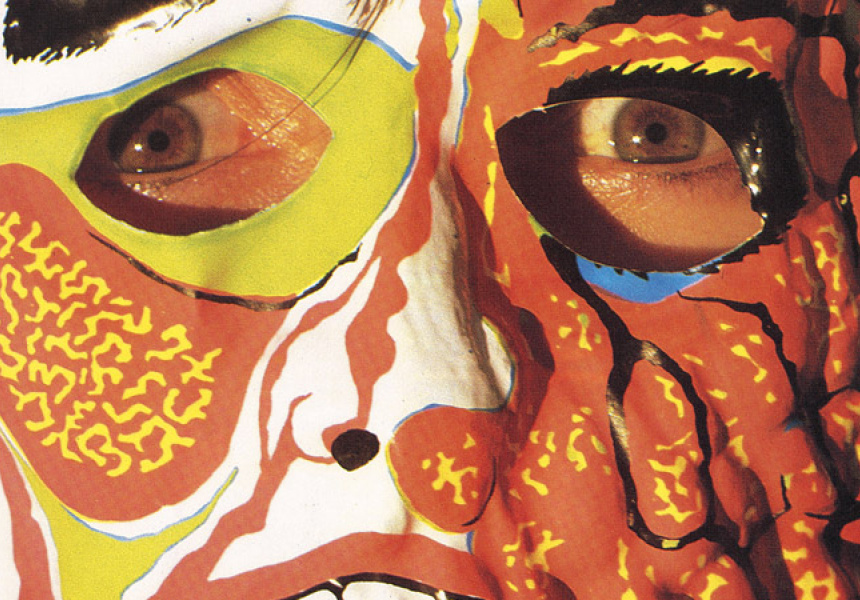 There are two ways of entering Mix Tape. Through the door on the right, you will find artists associated with Paul Taylor, who founded Art & Text and curated POPISM at the National Gallery of Victoria in 1982, and work by John Nixon, who ran Art Projects from 1979 to 1984. Howard Arkley’s Muzak Mural-Chair Tableau marks a disco-inflected shift away from white cube containment, its dots pulsating above de stijl chairs like the repetitious morphing of a nightclub wall. “It’s a work that signals the shift from late modernist abstract painting into a post modern-inflected painting,” says Max Delany, for whom the show marks his first exhibition at NGV as senior curator of contemporary art, following his tenure as director of the Monash University Gallery of Art (MUMA). “It’s still engaging with abstraction and perception but also inflected by pop culture, decorative materials and psychedelic culture.”

Turn to the left and you enter galleries exploring “subculture, nightclub cultures, performative identities and the crossover between art, music and fashion,” Delany continues.

This portal is presided over by Leigh Bowery’s The Metropolitan, an imposing sequined floral gown and balaclava mask whose excessive chintz is offset by a black military helmet. This gatekeeper to a world of decadence stands as a staunch reminder of the grand excesses of the 80s as well as its darker undercurrents.

The 1980s was a decade that saw Australia live through synth pop, VCRs, the fall of the Berlin Wall, the Bicentenary, calls for a treaty between the Aboriginal people and the Australian Government and the AIDS crisis.

Painting, drawing, sculpture, photography, music, publishing, film and fashion are all included in the exhibition. Stadium rock is drowned out by urban new wave dreaming, from the St Kilda scene of the Boys Next Door to the experimental music associated with Clifton Hill Music Centre, pioneered by artists like David Chesworth and Phillip Brophy, who formed bands Essendon Airport and Tsk Tsk Tsk.

Along with work by well-known artists, there are pieces that offer viewers a history lesson in the culture surrounding lesser-known aspects of our visual culture. The outfits on display by the Abyss Studio label are a neon-airbrushed, cow-printed reminder of the unique type of opulence Australian fashion was creating in the 80s.

Sydney artist Jeff Gibson’s set of five screen-prints titled Swindler, impostor, charlatan, pretender, shyster presents a critique of the art world. As Delany explains, “The pretender here is the wheeler dealer Malcolm McLuhan, a conflation of Malcolm McLaren and Marshall McLuhan (the Canadian philosopher). It’s a work that’s not unrelated to what Barbara Kruger was doing in the States at the time.”

The overwhelming sense one gets from Mix Tape is that Australia in the 1980s was far removed from a reality composed of big perms and fluoro lycra. The show offers a diverse visual legacy of the artists who blazed a trail through that era and beyond.

On Sunday April 14, NGV Australia presents a free day of talks, events and music that celebrate the exuberance of 80s culture. For more details, click here